An interview with Melissa Kearney about the impact of educational television on young children. 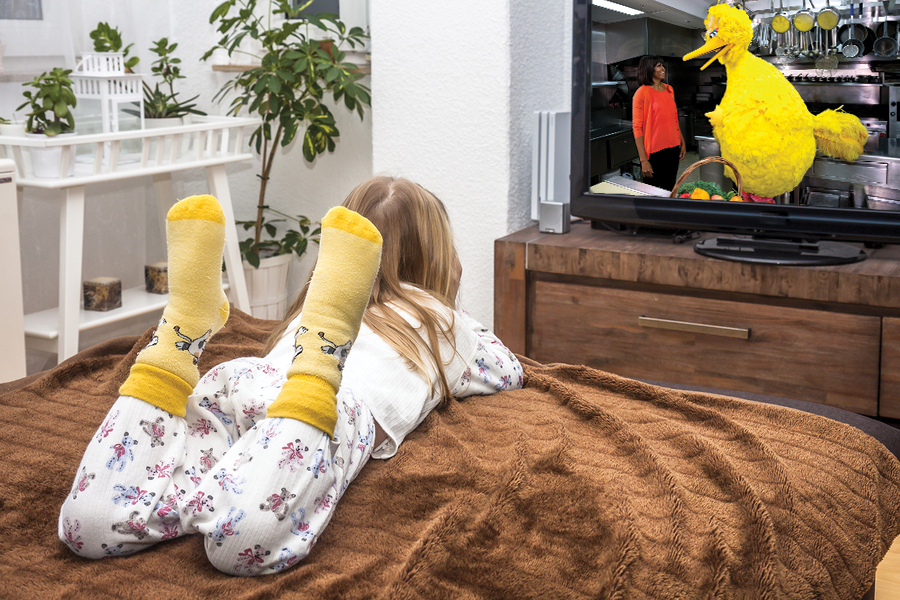 A paper in the January issue of AEJ: Applied says that young children who watched Sesame Street were more likely to stay on grade-level later in their education.

This year marks the 50th anniversary of one of the most optimistic and daring shows in television history.

Sesame Street is beloved by generations of viewers, and its iconic characters like Big Bird and Elmo are recognized around the globe. But since its launch in November 1969, the show has always been about more than children’s entertainment. It was a bold experiment to help close the gap in early childhood education.

In the January issue of the American Economic Journal: Applied Economics, researchers Melissa Kearney and Phillip Levine dig into decades of Census and broadcast data to determine whether the show actually lived up to its high-minded goals. Kearney said, by many measures, it actually worked.

We spoke with Kearney about the phenomenon that Sesame Street became, how she and Levine studied its influence, whether it’s possible for a program today to have the same kind of impact, and her own memories of watching the show as a child.

An edited transcript of that conversation is below and the extended interview can be heard by clicking on the media player below.

Melissa Kearney: We didn't set out to do media studies necessarily. We've been interested in teen childbearing, the causes and the consequences of teen childbearing for a long time. So the MTV reality television show study really came out of the decades of work that we've been doing and trying to understand what drove teen childbearing. That work, which found that this portrayal of being a teen mom as being something very difficult, led to a very sizable reduction in the rate at which girls were becoming teen moms. That led us to sort of really think about and understand the power of media, which is something that neither one of us had thought much about before. In reflecting on that study and the broader question, we thought MTV actually didn't set out to do something socially useful with that show and it just sort of happened. I wonder what the widespread cultural implications of Sesame Street were given that Sesame Street was deliberately created to help kids? 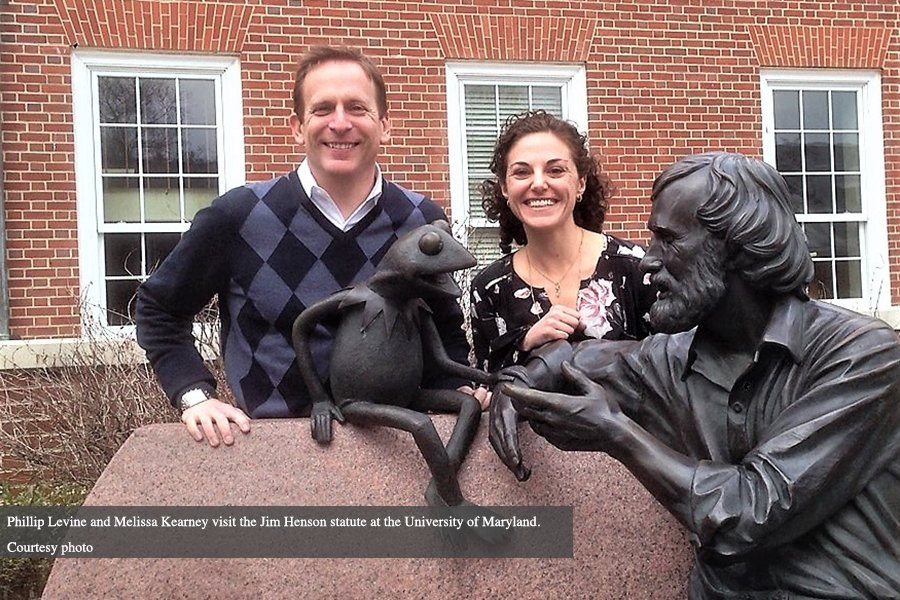 AEA: What was the preschool landscape like at the time?

Kearney: The landscape for preschool children at the time of Sesame Street's introduction was nothing like it is today. Very few kids were in center-based nursery school, most kindergartens were only half-day, there really wasn't this sort of emphasis on enrichment or educational activities for young children at that time. The most popular children’s television shows were things like Looney Tunes or Tom & Jerry. Captain Kangaroo and Mister Rogers did come into play around the same time, but it was just around that time that early childhood scholars, development psychologists, and education researchers were realizing that kids actually had a lot of capacity to learn before the age of five. Sesame Street came into existence at the same time as the Head Start program and the Perry Preschool program, and that was not an accident. These programs all were born out of that same new movement in the 60s recognizing that early childhood was actually an opportunity to help kids grow and learn.

AEA: How popular was it when it was introduced?

Kearney: It was a real blockbuster beyond what the creators possibly could have fathomed. ... In any given week, half of two- to five-year-olds were watching the show, and by some estimates over a six-week period there was near saturation, meaning that nearly every two- to five-year-old in the country who could watch Sesame Street was watching it.

AEA: Because it was a program that had a specific mission, there were early efforts to measure its impact. What were those studies and what did they find?

Kearney: This was fascinating. When the show was introduced, it was introduced and designed by educational scholars. The educational testing service — which folks today will know as ETS, the people who run the SAT — they set out to evaluate the program and they designed a small scale randomized control trial.

Much in accordance with what the designers of Sesame Street hoped for, the kids who were exposed to the show got to school and were better prepared.

In a second stage, they designed an evaluation where they went into Winston-Salem, North Carolina and Los Angeles, California. In those locations the broadcasting technology was such that most low-income households couldn't receive the program. The research team actually gave a randomly selected group of low-income households the technological capacity to watch the show. This is really a fabulous experimental design. They had households in these cities, some couldn't watch the show for technological reasons, they remove that limitation for a set of others, and they compare the outcomes for the kids.

AEA: What kinds of outcomes did you look for?

Kearney: We used US Census data from the 1980, 1990, and 2000 Censuses. We have observations on hundreds of thousands of kids throughout the country who potentially had exposure to Sesame Street, and we look at how their school performance was affected when they got to elementary school, middle school, high school, and beyond. We're looking at the whole country and we're looking at longer term outcomes. Were they actually better prepared when they got to school?

Our main measure of school performance is grade for age. That's a key measure that we observe in the US Census. A kid at a given age, are they in the grade that they're supposed to be? . . . Much in accordance with what the designers of Sesame Street hoped for, the kids who were exposed to the show got to school and were better prepared. And we see them more likely to stay on track when they get to school. If you lived in an area where there was low coverage and you compare those kids to kids in an area where there was high coverage, we estimate a causal effect of a 16 percent reduction in the likelihood that kids would fall behind in elementary and middle school. That's sizable.

AEA: Describe how you went about figuring out Sesame Street's penetration into homes.

Kearney: What we were looking for was exposure to Sesame Street that essentially had nothing to do with your parents choices. And so, it's actually the technology at the time that allows us to do that. At the time Sesame Street was introduced, there was no such thing as cable and so you could watch it only if your television received the broadcast signal. And in almost all instances Sesame Street was broadcast on PBS, and in some places PBS station was assigned a UHF channel, like above 13, and in other places it was assigned a VHF channel below 13.

AEA: Describe the difference between those two.

Kearney: UHF signals don't travel as far and basically, it's just harder to get to your television. So if you happen to be a preschool aged kid living in a county where the nearest broadcast tower was broadcasting on UHF, you are much less likely to be able to get it.

What we're looking at is just because of the broadcast technology, kids were less likely or more likely to be able to get Sesame Street into their homes. You can think about this as kids potentially having access as opposed to watching the show. We don't know who actually watched the show. We know that you probably could get it in your house or you probably couldn't. And we also know that at the time, most of the kids who probably could get it, were probably watching it. So it's of course that way, but the beneficial or advantage of this strategy is that whether or not you watched it didn't have anything to do with how important it was to your parents that you learned or how interested you were as a kid in learning. It just has to do with this predetermined technological determination in your county at that time.

AEA: How far do you think a show like this could have gone in being a substitute for early childhood education?

Kearney: That's a great and fraught question. Like I said, the early evaluation that was done, the RCT, found these test score results that were on par with Head Start. It was fascinating to us when we read the literature and accounts of what was going on in government and agency discussions at this time. Some of the folks were lamenting, ‘Hey why are people going to pay for Head Start if they realize they can get the same educational benefits from Sesame Street?’

The point was made that Head Start was much more comprehensive than Sesame Street, like Head Start also provided medical and dental benefits for the kids. In terms of just the literacy and numeracy benefits, it seems like Sesame Street delivered really well. But when you go to preschool and a program like Head Start, there's a lot more happening than just learning your numbers and letters. So it would be a mistake to think that we could sort of scrap early childhood education and just put kids in front of educational content on television. But I do think it's really encouraging to think that even three year olds can learn a lot from a really well-designed program.

AEA: Is it possible for a single show or technology to have the same kind of impact that Sesame Street did?

Kearney: It's highly doubtful that any single show would have this large of an aggregate impact because it just doesn't have the market capture that Sesame Street did. In some places, in some disadvantaged neighborhoods, nearly 90 percent of kids were watching it. There is no show like that today. . . . I don't think it's impossible for another show to improve kids' test scores or school readiness, but it wouldn't be just one show dominating the country.

AEA: What did Sesame Street mean to you as a kid?

Kearney: I did watch it. Actually, when I told my parents I was working on this study, my Dad's comment was 'You and your sisters learned everything you knew from Sesame Street.' We watched it every day. I was obsessed with the Count. I loved the Count, which is not surprising since I went on to really like math. My parents, they were busy. This was a great way for me and my sisters to sit in front of something and learn something. It definitely was an important part of my childhood.

Pulling voters to the right

To what extent is Fox News helping elect Republicans?