You have the right to an attorney

Expanding access to legal counsel would benefit criminal suspects, but what about everybody else? 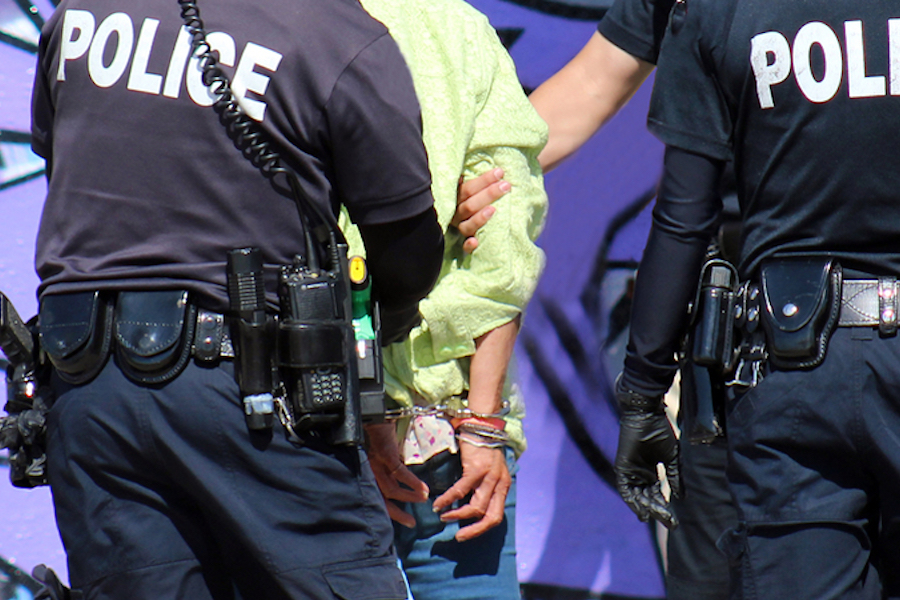 A woman is arrested in Los Angeles in 2015. A recent paper in AEJ: Economic Policy suggests that giving criminal suspects access to legal counsel sooner reduces the chances that they will be charged with a crime, but also could lead to an uptick in the crime rate overall.

You have the right to an attorney. If you cannot afford an attorney, one will be provided for you.

Anybody who’s seen a TV police drama recognizes that line. It’s part of the Miranda rights that officers recite to criminal suspects upon their arrest.

Being able to consult with an attorney is usually critical for the person being detained, potentially determining the difference between freedom or a jail sentence.

Also important is when the attorney enters the process. The sooner a suspect can talk with a lawyer, the more likely they are to walk away free.

But that’s not the only consequence, according to a paper in the May issue of the American Economic Journal: Economic Policy. The paper takes a broader look at the societal implications of the right to legal counsel for criminal suspects. The authors discovered some surprising evidence about how expanded rights can actually lead to higher crime rates.

A lot of lawyers find it difficult to acknowledge that there is any cost (from expanded rights).

“A lot of lawyers find it difficult to acknowledge that there is any cost (from expanded rights),” said Yehonatan Givati, co-author of the paper with Oren Rigbi and Itai Ater. “We don't have a specific view about whether the right to counsel is bad or good in this specific context...but at least acknowledging that there is some cost seems reasonable.”

Givati and his co-authors offer an economic analysis to an issue that is often discussed in legal terms, and their findings could complicate discussions around individual rights and public safety. It comes amid a larger public discussion about expanding rights to legal counsel for civil cases and immigrants facing deportation.

The researchers looked at data from 1996 to 2003 when Israel rolled out reforms to expand the right to counsel. Prior to the reform, free counsel was provided only once a person was charged. The reform extended the right to counsel to suspects, that is people who were arrested but not charged yet.

They discovered that the defense lawyers were effective. Those arrested were detained for less time, with the duration of arrests decreasing 16.7 percent. There was also a 2.6 percent drop in the share of arrestees who ended up getting charged, a decreased likelihood that the court system would approve arrests made by the police, and an increased number of arrestees who were released as “non-suspects.”

Criminal Deterrence?
A late-90s reform in Israel that expanded access to defense attorneys for criminal suspects resulted in declining arrests and increased incidents of crime, especially less-severe crimes like theft or purse snatching. The chart below shows what happened when the Haifa region implemented the reform in November 2002. 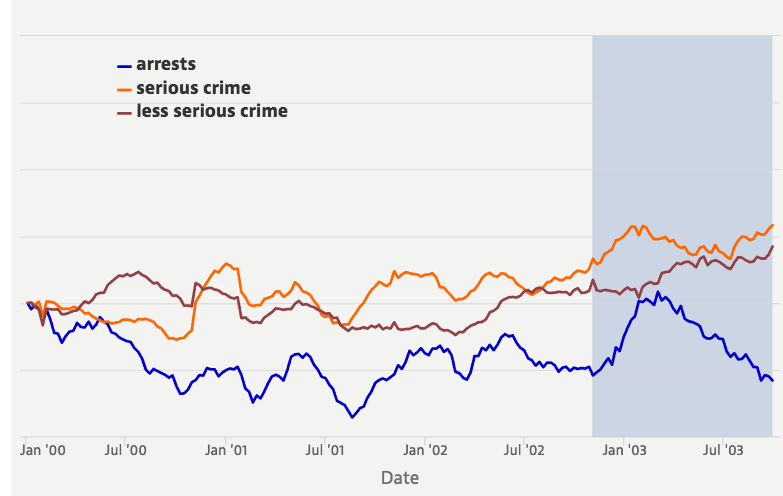 But there were impacts beyond the courtroom. Police behavior changed. Officers became less likely to arrest someone, particularly for smaller crimes like purse snatching or intentionally damaging property. Arrests dropped 5.7 percent because of the reform, and by nearly 12 percent for lighter crimes with sentences of three years or less.

Meanwhile, incidents of crime went up. There was a 3.3 percent increase in reported crime, mostly the smaller crimes that police seemed less intent to arrest someone for.

It was a surprising consequence that no one expected, Givati said, including many attorneys.

“I think that wasn’t an obvious conclusion for us,” said Givati, who holds a law degree as well as a doctorate in economics. “We had a hunch that it could go both ways. From lawyers, this is the finding that they find most disturbing.”

Givati is quick to point out, however, that these expanded rights to legal counsel shouldn’t necessarily be revoked because they led to an increase in crime. Rather, it is merely a consequence that should be considered when policymakers design such reforms.

“Our broader point is that you should really investigate this, instead of saying the right to counsel is just a fundamental right that should always be given,” he said. “The idea is that there are certain benefits and costs for these rights.”

He also hopes the paper sparks more interest in this issue from economists, who he said have an important role to play in helping inform the debate around human and legal rights.

“People argue over rights in the newspapers, political debate, legal debates,” he said. “The sense I get is economists so far have not contributed much to this debate. As an economist I think there is room for the economic way of thinking to contribute. ...using their tools, whether it's their way of thinking or their empirical tools, to think about this.”

The Economics of Rights: Does the Right to Counsel Increase Crime? appears in the May issue of the American Economic Journal: Economic Policy.