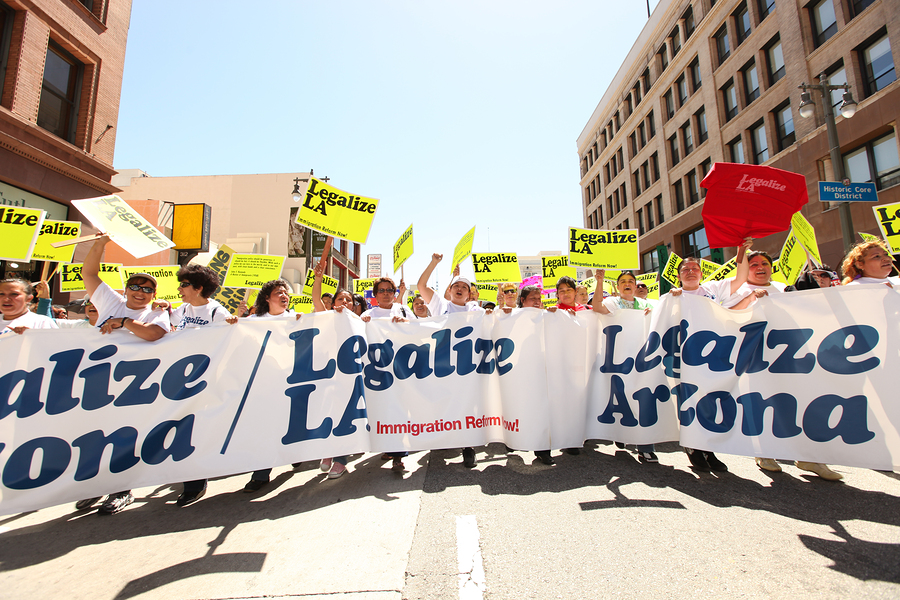 In recent weeks, Department of Homeland Security officials credited tougher legal hurdles for asylum seekers for a stark decline in border apprehensions of mothers traveling with children since December. And a more aggressive stance by the U.S. Immigration and Customs Enforcement agency (ICE) has resulted in a spike in immigration arrests, especially for those without criminal records.

It’s a reminder that immigration control doesn’t begin and end at border walls or checkpoints. And some states are eager to complement this federal immigration crackdown with laws of their own. Texas recently passed a bill that has drawn comparisons to SB 1070, the controversial 2010 Arizona “show your papers” law.

“I predict that what you're going to see . . . instead of policy makers and voters worrying just about the borders themselves, I think they're going to consider passing policies like this that make it less attractive to be here, and try to deter immigration in that way,” said Texas A&M economist Mark Hoekstra, in an interview with the AEA. Hoekstra is the author of a new study about the deterrent effects that these non-physical barriers can have on would-be immigrants.

Hoekstra and co-author Sandra Orozco-Aleman study the impact of SB 1070, the Arizona law which ignited a media firestorm both across the U.S. and south of the border. The law required local police to check the immigration status of anyone who was arrested, empowered officers to detain anyone they had reason to believe was residing in Arizona illegally, and made it a state crime to seek employment in Arizona without work authorization. It prompted calls for boycotts in the U.S. and was denounced by politicians and commentators across Mexico.

I predict that what you're going to see . . . instead of policy makers and voters worrying just about the borders themselves, I think they're going to consider passing policies like this that make it less attractive to be here, and try to deter immigration in that way.

It was designed to make Arizona a less hospitable place for undocumented immigrants, perhaps encouraging them to self-deport, and to deter others from settling there in the first place. Arizona had long been a popular place for undocumented immigrants crossing the southern border. Would SB 1070 be effective in keeping them out, even in the absence of physical barriers in the Arizona desert?

Most provisions in the law were temporarily prevented from going into effect by a court order, and a U.S. Supreme Court decision eventually gutted some provisions of the law. But even in the few months after the law passed and before it was to be implemented, Hoekstra and Orozco-Aleman find it had a huge effect on the plans of undocumented immigrants coming north.

It’s hard to track undocumented immigrants who were already in Arizona, in part because they are not likely to volunteer their status to U.S. government survey-takers when they call. But a survey of migrants administered by the Mexican government in airports and bus stations along the U.S.-Mexico border gives us a rare look at the undocumented population.

Survey takers ask migrants for information about their background, immigration status, and plans for life in the U.S. For years, Arizona was the second most popular destination listed, after California, with about a quarter of migrants who mentioned a specific destination intending to settle there, at least temporarily.

SB 1070 didn't have to go into effect to have an impact
Share of surveyed undocumented migrants in Mexican border towns who report an intended destination in various states. The share of migrants heading to Arizona fell sharply in the months when SB 1070 was in the news, even before its provisions took effect. 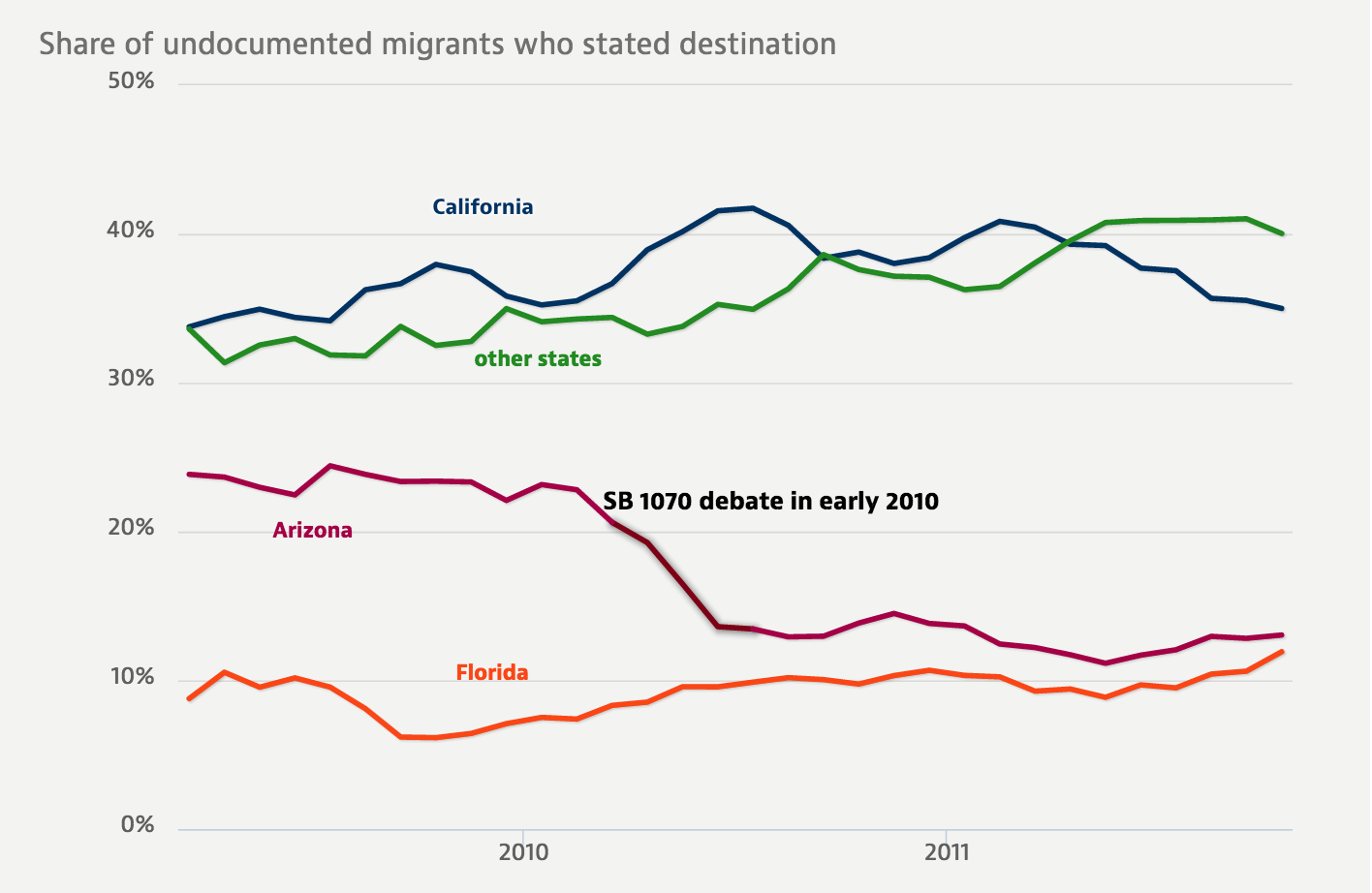 Beginning in March 2010 when the SB 1070 debate heated up, migrants became much less likely to head to Arizona. By July when a federal court blocked most of the law, interest in settling there had declined by about 50% relative to other states.

Even though many of the travelers were poorly educated and very few reported knowing English, the strong response in the data implies widespread awareness of the law, or at least the sense that Arizona had become more hostile to immigrants, and an understanding that it would not be applicable in other states.

This finding emphasizes the broader point that physical barriers like walls or fences aren’t the only ways to shift immigrant flows -- laws and policies in the interior can provide a strong incentive. And while there is still a lively debate about the economic effects of immigrant flows, this study could bolster the case for targeted enforcement for anti-immigration policymakers both in the U.S. and in Europe.

Right now, SB 1070 and the similar laws it inspired in other states are mostly inoperative or tied up in litigation. But if these laws make a comeback and spread across a significant portion of the country, they might not be as effective as the experience with SB 1070 suggests.

“I think the thing that's tough for us to know from our study is if the entire country passed a similar law, would you have seen you know a similar drop in immigration?” said Hoekstra. “Or would people say, ‘hey, I'll still go anyway. I might avoid the one state that has this, but if every state has it, I'm not going to avoid immigrating altogether.’” ♦

Illegal Immigration, State Law, and Deterrence appears in the May 2017 issue of the American Economic Journal: Economic Policy.