Why are areas near Detroit’s thriving downtown less developed than ones further away? 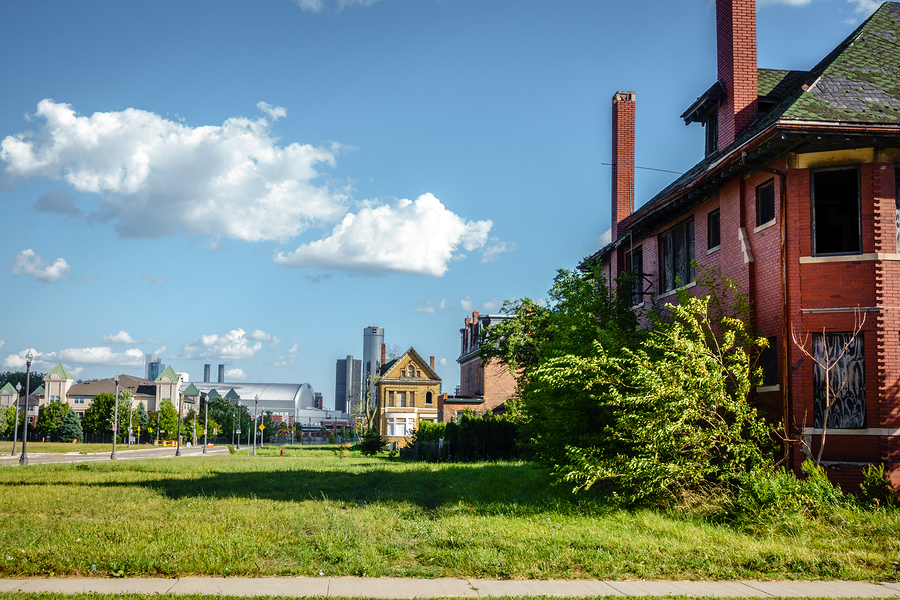 Detroit is a strange city.

Its downtown vibrates with business, shopping, and entertainment. Yet, a small, wide-open field surrounded by more empty lots and abandoned buildings is only a 15-minute walk north from Comerica Park, home of the Tigers.

In contrast, drive 15 minutes up I-75 from the ballpark, past the northern boundary of the city, and fully developed residential neighborhoods stretch for miles.

The same pattern emerges in nearly any direction from the central business district.

Detroit is wasting valuable space around its downtown, but it doesn’t have to, according to a paper in the May issue of the American Economic Journal: Economic Policy.

Authors Raymond Owens, Esteban Rossi-Hansberg, and Pierre-Daniel Sarte found that more collaboration between developers, residents, and other stakeholders could turn around blighted, but well-positioned, areas in Detroit.

“You need coordination in order to create a successful neighborhood,” Rossi-Hansberg told the AEA in an interview.

Rossi-Hansberg and his co-authors studied a relatively cheap solution that could reap major rewards for everyone involved.

Over the second half of the 20th century, Detroit went from America’s arsenal of democracy to the epitome of its rust belt. In 1950, it had 1.8 million residents. Today its population is under seven hundred thousand.

But that decline was concentrated in a few areas. (Detroit’s metropolitan population has actually stayed roughly the same since 1980.)

After the 1967 riots
The chart below shows the population decline over the 70s in census tracts across Detroit. The "vacant" tracts may not be completely abandoned, but they've had very few residents in recent years. 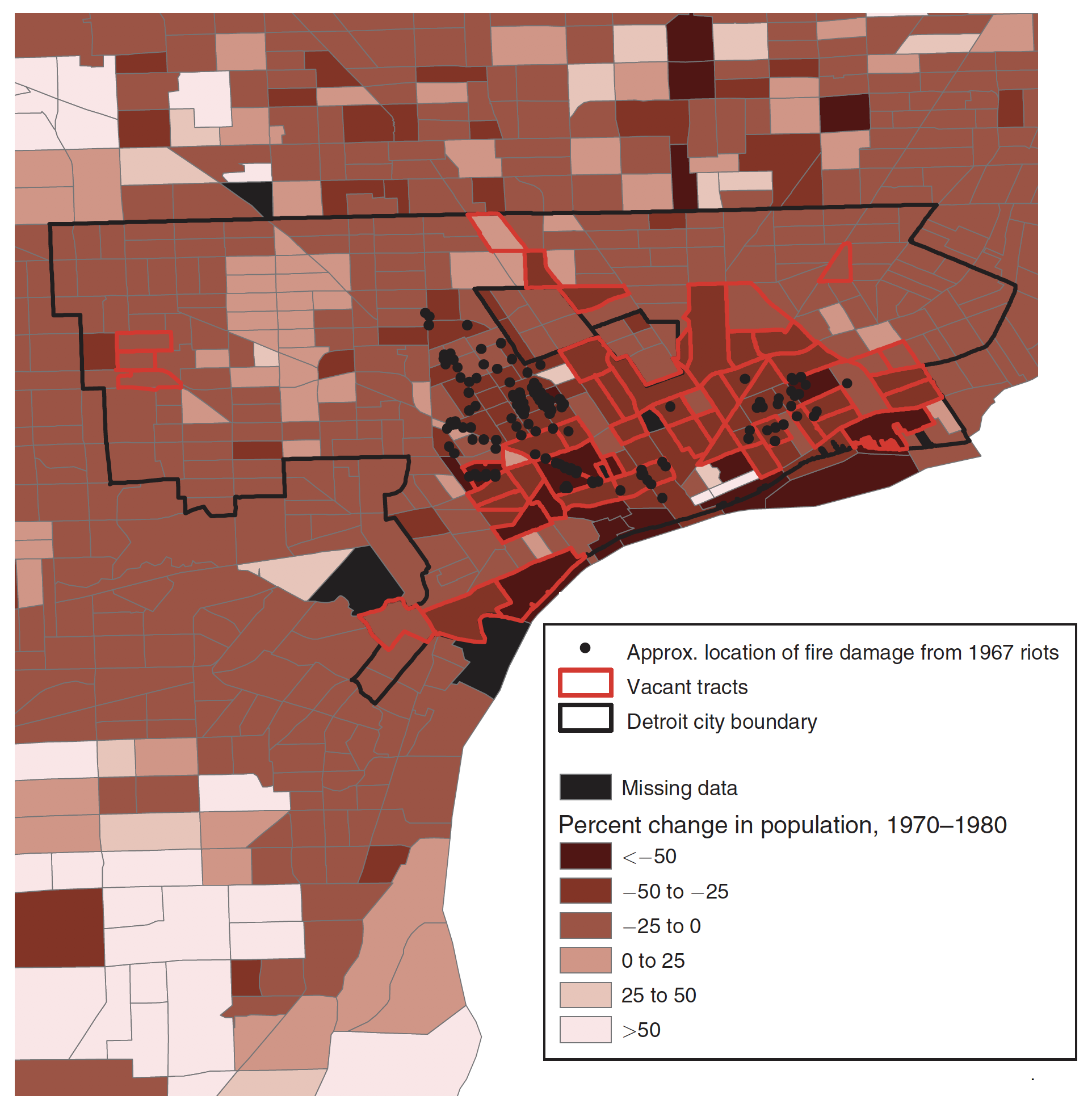 Entire neighborhoods near downtown were built to house the blue-collar workers at GM and Ford. When those companies started moving production elsewhere in the 1960s, many of those workers left too.

At the same time, new highways were cut through the city to let mostly whites families commute from the suburbs.

These factors undermined coordination in these neighborhoods, according to the authors, which in turn has kept them mostly abandoned for decades.

So far, Detroit’s efforts to manage this decline have barely helped. The city has demolished 20,000 homes since 2014 to make way for new developments—and if things go according to plan, that number will eventually reach a quarter of the original housing stock. But there’s been little new construction in bulldozed areas.

The underlying problem is that families don’t want to live in areas without neighbors, local stores, good schools, and other amenities. But at the same time, the scale required to fully develop an area all at once is too large for a single company.

“No one wants to be the first mover,” Rossi-Hansberg said. “If you move on your own and no one else moves, you lose.”

What’s needed are reassurances that enough developers and residents will move to a neighborhood within a short period of time.

The authors say that so-called development guarantees, offered by the city or other large backers, can solve this problem. In such a scheme, guarantors would promise developers some minimum level of investment, which would ensure that a critical mass of projects started at the same time.

No one wants to be the first mover. If you move on your own and no one else moves, you lose.

How big do these guarantees need to be? The answer is very sensitive to how big targeted areas are and their location.

To get an estimate, the researchers built a spatial model using data on commuting times, employment, housing prices, and land use for census tracts across the Detroit metro region.

They found that the most ambitious plan—guarantees for all underdeveloped tracts—could generate over 200 million dollars a year in new rents. And the development guarantees themselves would only need to be half of that: a 50 percent return. Moreover, roughly twenty thousand people would return to the city proper.

Even areas not targeted for development would gain from having more densely populated surroundings. Some of the benefits would even accrue to regions outside the city, highlighting the difficulty of identifying all the relevant stakeholders.

More cautious approaches that focus on a few or just one area at a time were still worthwhile in the authors’ model. And their work gives policymakers an idea of how big those guarantees need to be for each census tract in Detroit.

“We give a ranking in terms of which tracts would be best to give a guarantee first,” Rossi-Hansberg said. “But, at the end of the day, there are benefits for all of the underdeveloped areas.”

“Rethinking Detroit” appears in the May issue of the American Economic Journal: Economic Policy.

How the Great Fire of 1872 helped Boston grow

The upside of an urban disaster