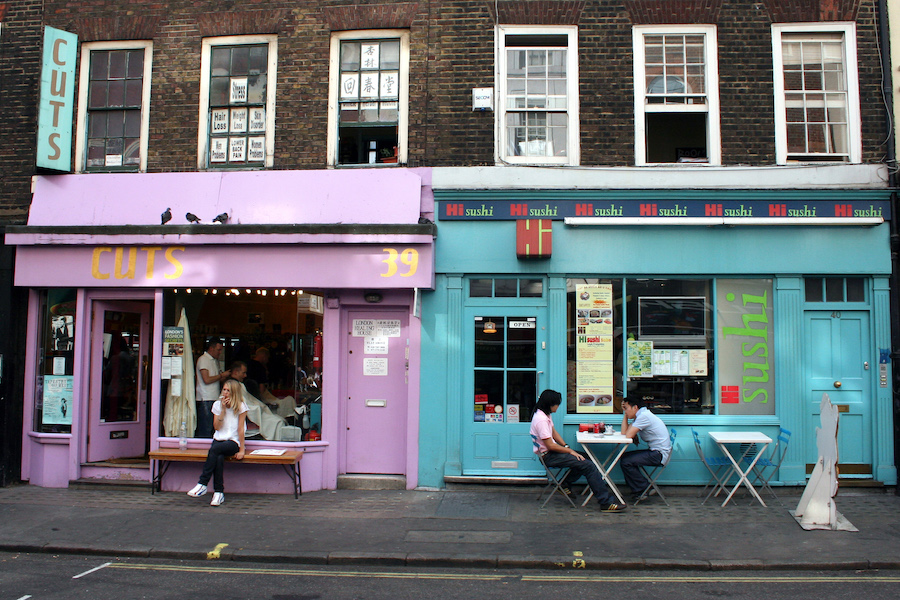 People sit in a typical Soho backstreet in London.

The Soho district of London is known today for its boutique shops, high-end dining, and luxury hotels. Houses there run in the millions of pounds. Any semblance of its working-class history appears to have been erased by years of rebuilding and gentrification.

However, according to a paper in the February issue of the American Economic Review, homes on a few blocks there still sell at a discount compared to those nearby—all because of a long-gone water pump tainted 160 years ago.

Authors Attila Ambrus, Erica Field, and Robert Gonzalez found that a cholera outbreak, tied to that pump, in what was then called St. James Parish, caused neighborhood poverty decades after the disease was eradicated.

“This was an opportunity to see if we could connect an event that occurred a long time ago to the spatial evolution of neighborhood poverty,” Field told the AEA in an interview.

Their results have important implications for how cities develop and the limits of what planners can do to encourage renewal.

This was an opportunity to see if we could connect an event that occurred a long time ago to the spatial evolution of neighborhood poverty.

In 1854, St. James’ residents were a mix of the working poor and well-to-do entrepreneurs. Many had decent jobs as tailors, shoemakers, servants, and masons.

But one neighborhood in the parish was devastated by a cholera epidemic that killed 660 residents, roughly 3 percent of the population, within a month. Many families were thrown into poverty by the loss of a breadwinner.

In response, households did whatever they could to make ends meet. Some resorted to renting spare rooms, overcrowding London’s already most crowded parish at the time. Others used any extra space for gambling, prostitution, and even herding cows.

It took a detail-oriented public health official named Dr. John Snow to track down the source of the problem. By meticulously collecting data on the location of cholera symptoms and deaths, he was able to determine that it was being transmitted by a local water pump—known as the Broad Street pump.

The authors drew on these data, in combination with land-tax records and the British equivalent of Zillow, to isolate the long-term impact of the outbreak on the neighborhood.

“Usually you don't have data on what happened to people 150 years ago. That is maybe the most challenging aspect of trying to study the long-term effects of a shock,” Field said. “In this case, we knew exactly how the disease spread.”

They used a technique called regression discontinuity design that compared property values and other outcomes just inside of the Broad Street pump catchment area to those just outside of it.

They found that the parish was altered in numerous ways years afterwards. Properties inside the boundary saw more than a 10 percent decrease in rental prices by 1864, a decade after the epidemic. Families who kept their money and their health tended to leave the parish, while those struck by sickness and poverty remained. In addition, the area became even more densely populated and housed more immigrants than surrounding areas.

Even in 1899—by which time pumps had long been replaced by piped water—the neighborhood had lower property values and poorer residents. By 1936, homes inside the catchment area sold at roughly a 30 percent discount. And the authors’ estimated that that is still the case today.

There goes the neighborhood
The chart below shows the regression discontinuity plots for several variables. Negative values on the x-axis (in meters) are outside the Broad Street pump catchment area; Postive values are inside it. All y-values are logarithmic. Right before the epidemic, Panel A, there was no jump in rental values at the boundary. But a discreet jump appears for rental and house prices for many year after that. 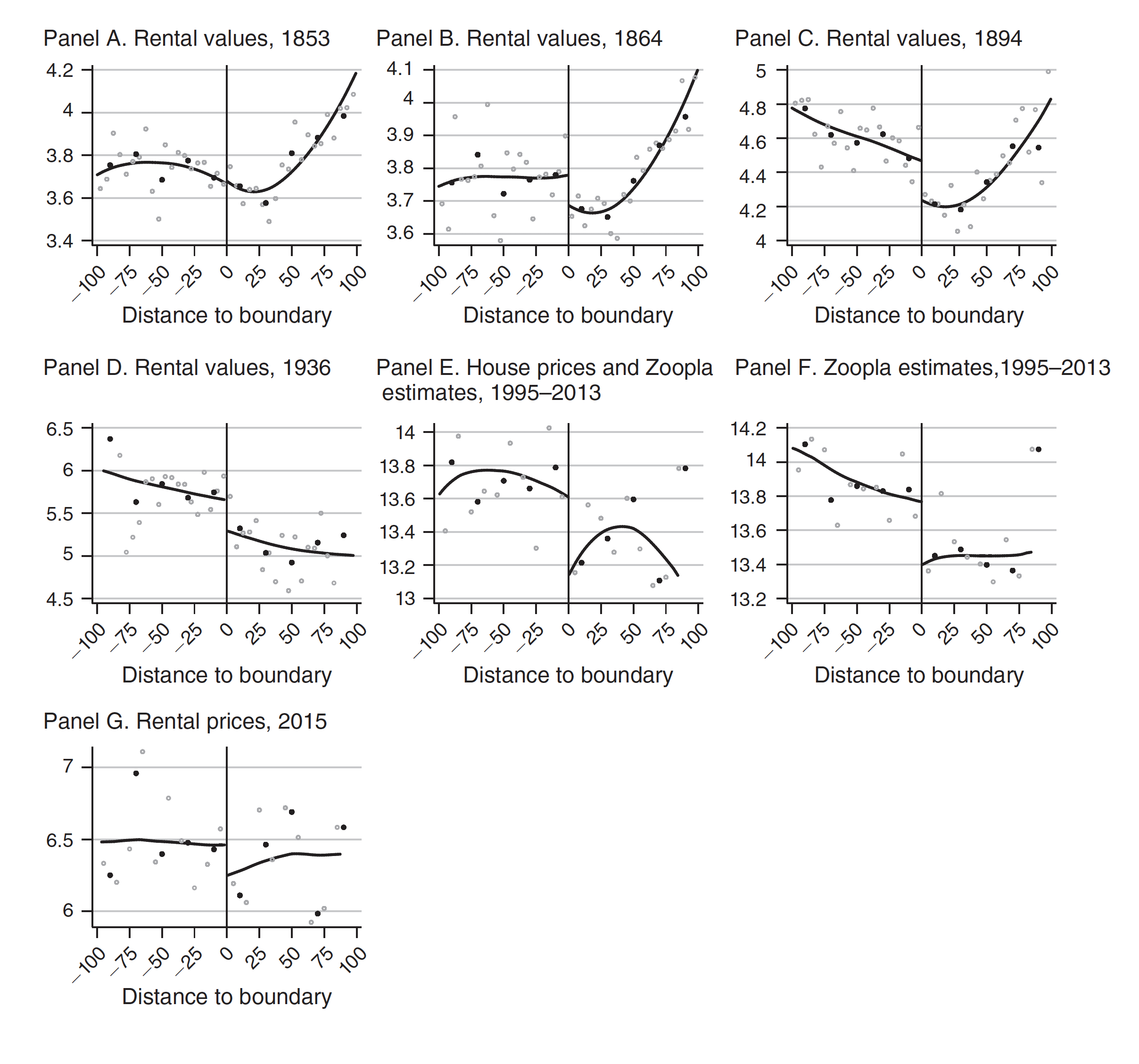 Many factors could go into why poverty in St. James Parish was so persistent. But the authors focused on one important dynamic that fit their data nicely.

Because people of similar economic status like to congregate and rental agreements make rapid turnover impossible, the character of city neighborhoods often remains fixed. But with a big enough shock—such as an 1854 cholera outbreak—entire blocks of housing can change the type of residents they cater to all at once.

Unlike many other explanations of urban development, such a story doesn’t rely on any changes to the infrastructure of a city. People merely sorting themselves can alter the economic trajectory of a neighborhood, even if the land, buildings, and nearby businesses make it appear more valuable.

Recent research has shown how much neighborhoods shape the lives of the people who live in them. As a leading scholar in the field put it, “the roots of economic opportunity lie at a very local, neighborhood level.”

The authors’ work highlights just how deep those roots might run.

“Loss in the Time of Cholera: Long-Run Impact of a Disease Epidemic on the Urban Landscape” appears in the February issue of the American Economic Review.