How the Great Fire of 1872 helped Boston grow

The upside of an urban disaster 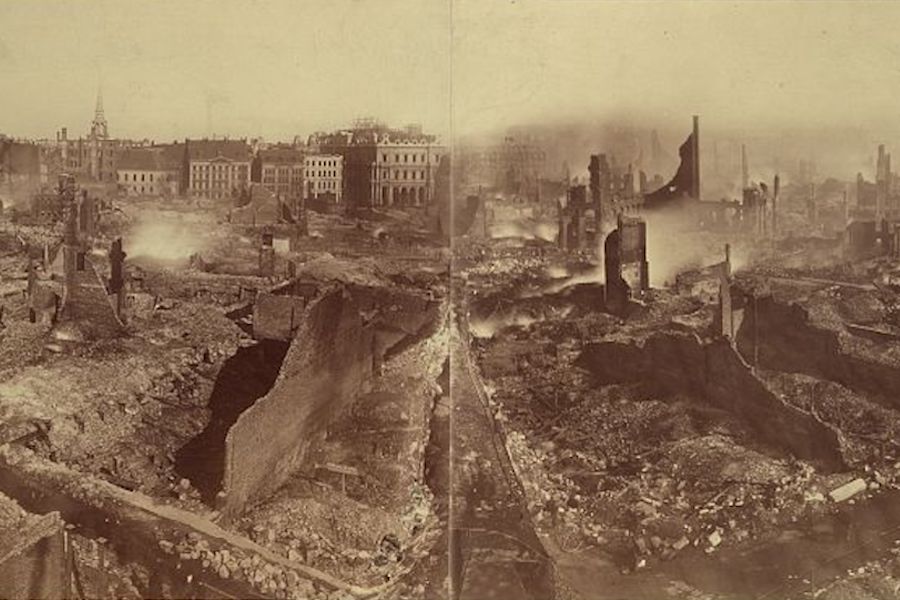 The ruins of the Great Boston Fire photographed in the days after the event, November 25, 1872.

It’s a reality of city living – the desirability of your home or property depends a lot on how your neighbors upkeep theirs.

Landowners in urban areas add fewer building upgrades and replace aging buildings more slowly than their neighbors want. That’s because they have to pay all the costs for any upgrades, but share the benefits with neighbors.

The “spillovers” that come with close proximity are part of what makes cities great – but the fact that the benefits can’t be fully captured by owners means they don’t do it as much as we would like. It also means that, absent any coordination, a growing city won’t reach its full potential. Even if conditions are improving and it would make sense to upgrade to bigger and better buildings, everyone is waiting for someone else to make the first move.

Could it get so bad that a huge destructive event that forced everyone to build from the ground up would actually be a good thing?

That’s the question that motivated economists Richard Hornbeck and Daniel Keniston to study the aftermath of the Great Boston Fire of 1872. They learned that in the months after the fire – which reduced a major section of downtown Boston to rubble and claimed 13 lives – contemporaries were saying that it might have actually been a good thing for the city.

Observers marveled at the opulent stone and brick buildings going up in the burned section of the city and wondered if the fire hadn’t helped Boston become a more prosperous place. In a new study appearing in this month’s issue of the American Economic Review, the authors look to old city property records to test this hypothesis.

At the time, Boston was a fast-growing city with few if any regulations on land use and building quality. The building stock included old and run-down buildings built for a time when Boston was smaller and less wealthy. Individual landowners might decide to upgrade or replace buildings here and there, but even a shiny new building with a marble facade and grand staircase might not generate much extra rent if the surrounding neighborhood was in disrepair.

The city’s elite might have benefitted if they got together and all decided to rebuild nice new buildings, but that would have been impossible to coordinate. Instead, the patchwork of old and new buildings dragged down property values and acted as a brake on the city’s development.

Property values in the aftermath of the Fire
Plots in late 19th-century downtown Boston included in the authors' study. Each plot is color-coded by the change in building or land value since the last pre-fire assessment in 1872. Click on the legend to view changes to land and building values on each plot across different time spans.
Source: data provided by authors

But after the flames swept through a large section of downtown Boston and left block after block in ruins, the equation changed. The area would obviously be redeveloped with new buildings. Landowners deciding how to rebuild would anticipate this and make their buildings nicer too, to capitalize on their foothold in what would become the nicest part of town. This cycle would allow landowners to rise above the forces that were previously holding real estate development back.

As author Daniel Keniston put it in an interview with the AEA, if everyone believes everyone else will rebuild better buildings than they had before, “it becomes kind of a self-fulfilling prophecy.”

One of the authors’ key tests was how land values responded to the fire. The researchers study individual building fires in the years leading up to 1872, and find that land values for affected plots typically didn’t rise after a fire, as expected. Each landowner probably rebuilt after those fires, but because other nearby plots weren't affected, the neighborhood wasn’t poised to change dramatically. But after the Great Fire of 1872, something different happened.

Land values in the affected area and nearby blocks rose between the tax assessments in 1872 (before the fire) and 1873 (after the fire). This is evidence that investors and landowners relished the prospect of redeveloping the area and realized the simultaneous rebuilding would lead to better-quality buildings, according to the researchers.

And those land values didn’t just rise a little bit. The degree to which land values soared after the fire took the researchers by surprise, according to Keniston. They calculated that the fire added about $13 million in value to the land in the burned area and surrounding neighborhoods -- slightly more than the $12 million value of the hundreds of buildings destroyed in the fire.

So a version of the fire that didn’t destroy life and property – imagine if the fire had been a controlled burn, with boundaries decided by city authorities in advance and preceded by an evacuation – would have increased property values in the city. Literally lighting valuable downtown Boston property on fire might have been a good thing, on net, for the city’s landowners.

This suggests that the spillover problem and the presence of old, degraded buildings was placing huge constrictions on Boston’s real estate market. The prospect of a clean slate for building in downtown Boston was apparently worth more than all the buildings in the path of the fire. Given that Boston was growing so rapidly at the time, and had essentially no regulations or zoning codes to help remove the worst offenders, this isn’t altogether surprising.

Still, the difficulties of coordinating across stakeholders persisted. Even in these highly conducive circumstances – a large empty expanse in the center of a city that everyone knew would be rebuilt – separate landowners didn’t ever really agree on a mutually beneficial strategy.

“There were attempts to get all bootmakers in one street, for example, but those efforts mostly failed,” said Keniston. Attempts by the city to claim more land for wider streets were mostly rebuffed by landowners. People were eager to rebuild quickly and enjoy living in the newer, more prosperous city that the fire left behind.

The authors examined property records from subsequent years to confirm the optimistic land valuations from the year after the fire – did the burned neighborhoods rebuild better than before, as expected? They estimate that building values in the affected area in 1882 were 67% higher than they otherwise would have been without the fire. It seems like the contemporary accounts that saw an upside to the calamity might have been onto something. ♦

Creative Destruction: Barriers to Urban Growth and the Great Boston Fire of 1872 appears in the June 2017 issue of the American Economic Review.

Staying beneath the death ceiling

An interview with Raymond Fisman