The power of Papal persuasion

How much did Pope John Paul II influence the beliefs and actions of Catholics? 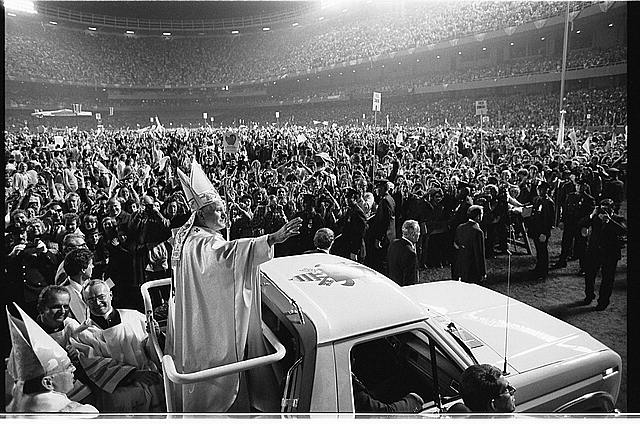 It had been more than a decade since Pope John Paul II visited Brazil and he arrived in the port city of Natal to a throng of the faithful who were eager to welcome him.

The Pontiff’s message during his ten-day trip to the world’s largest Roman Catholic country was nearly as sprawling as his itinerary. He would rail against economic inequalities, atone for centuries of mistreatment of Brazil’s indigenous people at the hands of Catholic missionaries, and exhort his followers to resist fundamentalist religious sects.

But a common thread running throughout it all was the importance of family and of having children. His words had an impact on many Brazilians, even if only for a little while.

A paper that appears in the October issue of the American Economic Journal: Applied Economics says that the Pope’s pro-childbearing message was persuasive enough to shift the sexual beliefs and behavior of many individual Brazilians. Contraceptive use declined, the frequency of unprotected sex increased, and nine months later there was a noticeable increase in births.

The paper offers novel insights into how economists can measure the influence of prominent figures.

When the Pope visited the UK in 2010, I was struck by the response as covered by the media (very unBritish outpourings of emotion). So I began thinking whether this had any impact on the way individuals behaved.

“I have been interested in understanding the impacts of ‘role models’ for a very long time, but never really had a good study design to do so,” said Imran Rasul, a co-author of the paper with Vittorio Bassi, in an email to the AEA. “At the same time, when the Pope visited the UK in 2010, I was struck by the response as covered by the media (very unBritish outpourings of emotion). So I began thinking whether this had any impact on the way individuals behaved.”

The beliefs that individuals hold drive their economic decisions, from employment choice to family planning. One focus for economists seeking to understand how people form beliefs has been studying the power of persuasion.

The Papal visit to Brazil in 1991 provided Rasul and Bassi a unique opportunity to examine persuasion and to get around their study design problem by taking advantage of data being collected around the time of the Pope’s visit. By fortuitous coincidence, the Demographic and Health Surveys Program was in Brazil interviewing women about their ideas on having children. Nearly all of the interviews were conducted from September to December that year, giving the researchers data about beliefs and sexual behavior before, during, and after the Papal visit.

Traditional marriage and family have long been central to the Catholic faith, the former seen as “an original gift from God to humanity.” So it’s no surprise that Pope John Paul II would have talked about family in his speeches.

However, it was a particularly important theme during his 1991 visit to Brazil. Pope John Paul II had been to Brazil twice before — in July 1980 and June 1982. A comparison of his speeches reveals that family-themed messages were much more prevalent in 1991 than the earlier trips, according to a textual analysis of keywords in Papal speeches that is included in the paper.

The Pope Speaks
The topic of family planning was mentioned often during Pope John Paul II's visit to Brazil in 1991. The word cloud below represents the frequency with which certain terms appeared in his speeches over the 10-day trip. Many of the most common words relate to family.
Source: Author data

The words “marriage” and “children,” for example, were more than twice as prevalent in his 1991 speeches than they were in 1980. Other words such as “abortion,” “contraceptives,” and “sterilization” that were nowhere in his 1980 speeches were topics he mentioned in 1991.

The reasons for the increased emphasis may have had something to do with Brazil’s declining fertility rate, which had fallen from 4.4 in 1980 to 2.9 in 1991, a decrease that was driven by increased rates of female sterilization and promotion of family planning services.

The authors found that the Pope’s visit reduced individual intentions to use contraception by more than 40 percent and increased the frequency of unprotected sex by 30 percent. Sure enough, nine months later, there was a corresponding 1.6 percent increase in births.

But the influence was fleeting. The authors looked at DHS survey data in 1996 and 2006 and found that there were no long-run impacts on the total number of children born. The Pope may have convinced some families to move up their plans for having a child, but it didn’t change how many kids they wanted to have overall.

Still, this mini “baby boom” after the Pope’s 1991 visit could have had ripple effects on the health and education systems over time, Rasul said, so it’s not as though there was no long term impact. It’s just that the Pope’s message had no real lasting influence over the beliefs and behavior of individual Brazilians.

The findings may not just be restricted to this particular religious context, however, and potentially could be applied to revered secular leaders.

“I certainly think there is a possibility that charismatic leaders, or revered leaders, can shape narratives and influence the beliefs and behaviours of those around them,” Rasul said. “There is a fundamental art of persuasion that firms/advertisers are aware of and use. I expect leaders in organizations to be thinking the same.”

“Persuasion: A Case Study of Papal Influences on Fertility-Related Beliefs and Behavior” appeared in the October issue of American Economic Journal: Applied Economics.