An offer you can't refuse

Did the Mafia exchange votes for construction contracts? 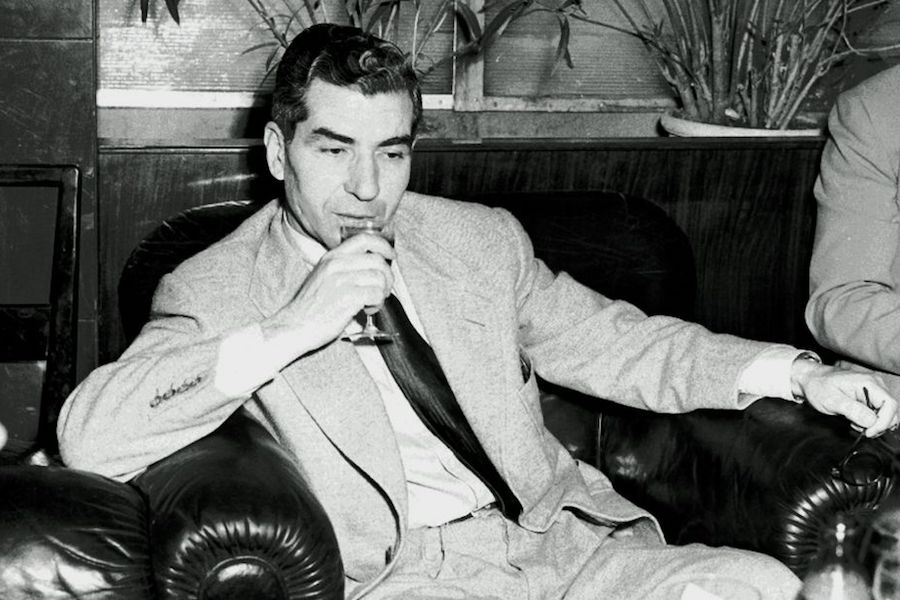 "Lucky Luciano", a Sicilian-born Mafia boss, is often called the father of modern organized crime in the US

Mafioso-turned-informant Leonardo Messina did not think highly of Italian politics.

In a conversation with the Parliamentary Committee on the Mafia, he described how politicians would publicly criticize the Mafia but then turn to them for help getting elected. When asked if the denouncements ever worried the Mafia, he replied, “No...The whole thing is a farce!”

A new paper in the American Economic Journal: Economic Policy quotes this conversation, which originally appeared in a 1992 Committee report. Anecdotal evidence like the Messina testimony has long supported the idea that the Mafia played a role in Italian elections. This is the first paper to empirically prove it.

Authors Giuseppe De Feo and Giacomo De Luca wanted to find out how free elections changed in the presence of the Mafia. “I come from a country [Italy] in which the idea that organized crime can engage in elections is common knowledge,” De Luca says. “You know the Mafia shapes some votes, but you never know how many.”

The authors analyzed Italian elections from 1946 to 1992. They found that the Sicilian Mafia lent their support to the Christian Democratic Party when political competition from the Communist Party increased. And, politicians may have rewarded the Mafia with favors in the construction industry.

You know the Mafia shapes some votes, but you never know how many.

During this time period, parties gained seats based on the percentage of votes they received nationwide. This allowed the Mafia to “replace” votes in the North, where they did not have much influence, with additional votes in Sicily, where they could pressure people into voting for their favored candidates.

The Christian Democratic Party (DC) had a decades-long national majority and a notorious relationship with the Mafia. When the Communist Party began to challenge their dominance, politicians and the Mafia worked together to keep the DC in office.

To figure out exactly how many votes the Mafia was influencing, the authors looked specifically at Sicily, where some areas had a strong Mafia presence and others did not. As Communist competition rose in the rest of Italy, votes for the DC increased disproportionately in Mafia strongholds. Municipalities without the Mafia did not see the same increase, implying that the additional votes were a result of Mafia pressure.

The Mafia may have boosted the vote share for the DC by as much as thirteen percentage points. In Palermo alone, the Mafia could have been responsible for at least sixty thousand DC votes. This might sound unbelievably high, but the magnitude is consistent with estimates from ex-Mafia members.

Voting Under Pressure
Each bar represents the estimated vote share for the Christian Democratic Party given a certain level of electoral competition from the Communist Party. The estimates are normalized to zero. In municipalities with a strong Mafia presence, the vote share disproportionately increases, suggesting that the Mafia influenced votes in these areas to make up for lost votes in the rest of Italy. 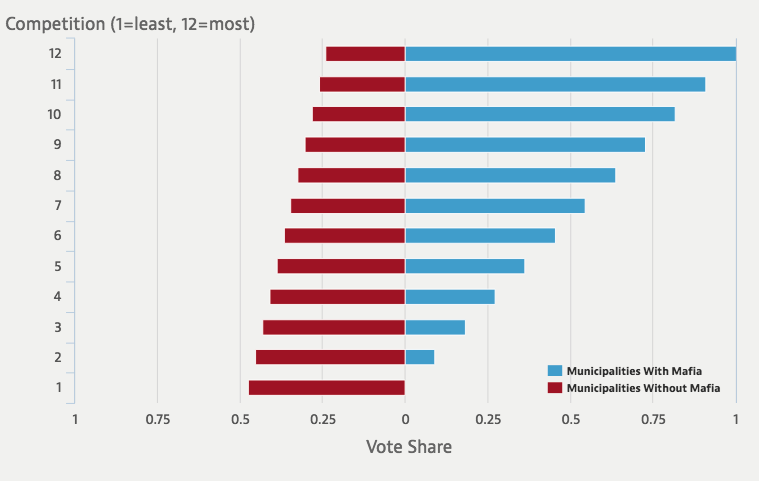 The authors also investigated whose votes were changing. They found that the Mafia mostly persuaded voters to shift their votes from Leftist parties, including the Communist Party, to the DC. Because the DC felt threatened by the Communist Party, they would have been especially interested in co-opting some of these votes.

To uphold their half of the agreement, the DC could have used several channels to repay the Mafia. Many of these channels, such as advocating for softer legislation on Mafia crime, are difficult to observe. The authors were able to analyze changes in the construction industry, however, where the Mafia is famous for reinvesting the revenue from its illicit activities. Politicians could have bolstered the industry by encouraging new development or awarding public procurement contracts to companies with Mafia ties.

Notably, the Mafia does not have a political ideology. Unlike other non-legal groups that attempt to influence elections, such as rebel groups, the Mafia is most interested in forming political connections. Given how successful their relationship with the Christian Democratic Party was, it is no surprise that they have become one of the most notorious groups in the world. “If you talk about organized crime, the Sicilian Mafia is one of the first images you think of,” De Luca says. “In the context of Sicily, it has always been an important player in social, economic, and political spheres.”

Recently, Italy’s anti-Mafia agenda has included protest marches and a controversial effort to help children leave Mafia families. If these efforts are successful, then they will contribute not only to the safety of Italy but also the strength of its democracy.

Mafia in the Ballot Box appears in the August issue of the American Economic Journal: Economic Policy.

Phoning in your vote

How emigration can change a political landscape