Measuring the effect of nearby gas wells on home prices 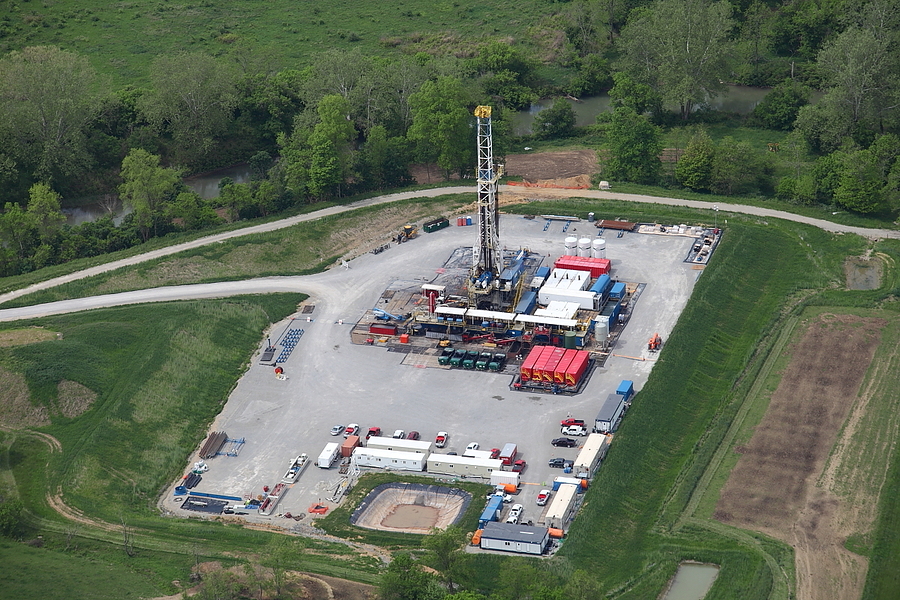 A shale gas well pad in western Pennsylvania. About 7,800 wells have been drilled in the state as of mid-2015.

Thanks to high oil prices and the advent of cost-effective techniques for liberating methane gas from shale rock using hydraulic fracturing – a process better known as "fracking" – the U.S. has seen a surge in natural gas drilling in recent years. The proliferation of new drilling operations in various regions across the country, including the Marcellus shale formation that stretches across six eastern states, has some very concerned about the potential for groundwater contamination, air pollution, and even earthquake risk. At the same time, shale gas drilling has been shown to contribute to job growth and higher wages, and has been hailed as a lifeline for moribund local economies.

The controversy has inspired warring billboard campaigns on a major Pennsylvania highway and prompted New York governor Andrew Cuomo to ban fracking in his state (a decision that frustrated some residents looking forward to royalty payments).

Toting up all the costs and benefits to determine if fracking is a welcome development in any given community can be very difficult. To do this, policymakers must determine how much people value clean air and safe water, how many new jobs can be generated by a productive well, and dozens of other factors. Any attempted accounting of all these factors is approximate at best.

Even as the debate about fracking has raged on, hundreds of thousands of properties in the Marcellus region have been bought and sold. In negotiating sale prices for each property, buyers and sellers have had to consider all the potential positive and negative effects of nearby shale gas wells. Perhaps all that data can tell us something about how people on the ground actually feel about the spread of fracking. An article appearing in this month's issue of the American Economic Review uses a database of property sales in Pennsylvania to draw some conclusions about whether shale gas wells make for good neighbors.

In The Housing Market Impacts of Shale Gas Development (PDF), authors Lucija Muehlenbachs, Elisheba Spiller, and Christopher Timmins combine two main data sources: transaction records of properties sold in 36 Pennsylvania counties, and state government data on shale gas wells drilled in those counties. These data allows them to determine how many wells existed within a certain perimeter of any property on the date of sale.

The authors use a hedonic price model to understand the ways that gas wells impact home prices. Hedonic price models are often used to assess how home prices are affected by characteristics like an additional half bathroom, a big backyard, or a nearby park. By treating proximity to shale gas wells as just another factor in the model, the researchers can get a handle on how new wells affect home prices. Do potential royalty payments and job opportunities make the neighborhood more desirable, or do concerns about groundwater contamination, extra traffic, and unsightly drilling rigs drag property values down?

Hedonic analysis exploits the tradeoffs between property characteristics (which also include neighborhood characteristics and amenities) and price made by homebuyers . . . Measuring the impacts of shale gas activity on property values provides a convenient way to quantify its effects (whether real or perceived).

The estimation strategy relies on three distinct kinds of comparisons: prices before and after a new well is drilled, prices for homes near and far from a new well, and prices for homes that have access to publicly-supplied piped water versus homes farther from population centers that depend on their own private drinking water wells. Because groundwater contamination from methane and other chemicals is one of the chief fears about shale gas drilling, we would expect prices to react differently in well-water-dependent neighborhoods. The degree to which they react differently will indicate how people in this region value a potential threat to groundwater quality.

The database of home sales has extensive information about the characteristics of each property, from the number of bedrooms to the square footage of the house. But the authors are still concerned about unobservable differences between the homes. Many of the groundwater-dependent homes are in rural areas far from any major cities, while some of the piped-water homes are duplexes or townhouses in urban centers where price trends might have little to do with what is happening out in gas-drilling country.

To address this concern, the authors restrict their attention to a narrow band of homes that are close to the border of public water access. This subset of homes is much more homogeneous than the sample at large, and this allows the authors to compare relatively similar houses when they estimate the effect of a new well.

Using this strategy, the authors estimate that a groundwater-reliant home within one kilometer of a new well will see a 13% drop in value, while piped-water homes will see an increase of 2-3%. The positive effect for piped-water homes is likely attributable to royalty payments (under Pennsylvania law, drilling companies must pay property owners royalties of at least 12.5% for gas extracted under their land).

Do shale gas wells make for good neighbors?
Click to add new shale wells to this simulated stretch of western Pennslyvania countryside and see the impact on property values. This graphic calculates changes to home prices using a formula that is based approximately on the authors’ findings. Note the starkly different effects for those with piped water service and those without.
Source: property value formula based approximately on Table 2, Panel A from Muehlenbachs et al. (2015)

For both groundwater-dependent and piped-water homes, the numbers are slightly more promising when all wells within a slightly larger radius of 1.5 or 2 kilometers are considered. The authors suggest that there may be a sweet spot at a certain distance from the well site where homeowners can capitalize on royalty payments but not have to deal with the worst effects of groundwater contamination, traffic, and noise pollution. The interactive graphic above uses the authors’ findings to simulate property value fluctuations when new wells are added to the area.

It is worth emphasizing that the authors have no actual water quality data for these homes – they only know the sale prices of homes that were sold during the study window – so they can't say for sure why property values fall for homes in close proximity to new wells. Nevertheless, the stark difference in impact for groundwater-dependent homes and other homes suggests that groundwater contamination (or the perceived threat of future contamination) is very relevant to homebuyers.

Do these results mean that gas wells are harming residents in Pennsylvania, especially those without access to public water supplies? Not necessarily. It is possible that the up-front lease payments made by drilling companies (which would not show up in sale prices) are more than compensating homeowners for eventual problems like contaminated groundwater or traffic disruptions. This could explain the results of another study finding that homeowners in New York, even in groundwater-dependent homes, wanted shale gas development to come to the state.

Using a hedonic price model as a way to estimate the impact of shale gas drilling is inherently limited because homeowners may misperceive risk and some benefits or harms may not be fully captured in property values. Even so, the stark property value effects for groundwater-dependent homes found in this study suggest that groundwater contamination is a real concern for those living near shale gas wells. The authors conclude with a call for a more research to better determine the likelihood of contamination for groundwater supplies near shale gas wells. ♦

"The Housing Market Impacts of Shale Gas Development" appears in the December 2015 issue of the American Economic Review.