Is physical retail really about to disappear?

How information technology is – and isn't – changing the retail sector 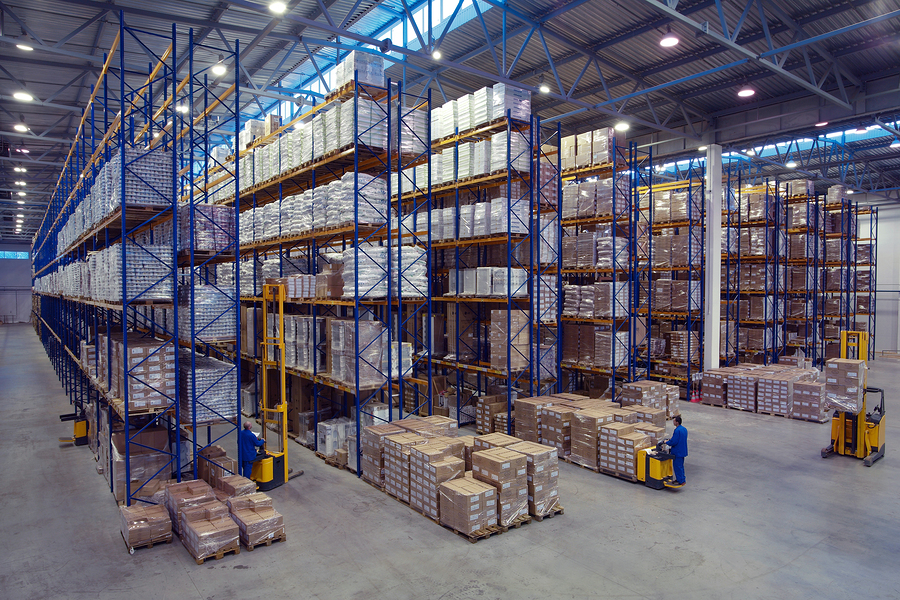 Recent advances in information technology have improved inventory management and allowed retailers to carry a wider variety of products. Both online retailers and physical retailers have found ways to benefit.

The holiday shopping season in the U.S. unofficially kicks off this Friday, and the retail sector is facing an existential crisis. With a string of high-profile bankruptcies, a drumbeat of gloomy headlines, and a series of record-breaking sales figures for e-commerce merchants, some are contemplating the "end of retail" as we know it.

Information technology is definitely transforming this industry, but is the brick-and-mortar retail model really on the way out? An article appearing in this month's issue of the Journal of Economic Perspectives examines recent government data on the retail sector from the Census Bureau, Bureau of Labor Statistics, and the Bureau of Economic Analysis in an effort to separate myth from reality.

In The Ongoing Evolution of U.S. Retail: A Format Tug-of-War (PDF), authors Ali Hortaçsuand Chad Syverson note that two, somewhat contradictory narratives about the future of retail have taken hold. The first is that all brick-and-mortar retailers will eventually go the way of Borders and be cannibalized by online retailers who can sell a broader variety of goods more cheaply and efficiently. The second is that customers will be increasingly flocking to warehouse-style clubs and supercenters.

First, the authors offer some perspective about recent trends in the retail sector. The sector as a whole is not disappearing – retail's shares of employment and value added (a measure which indicates total wages and profits across the sector as a share of GDP) have seen steady and gradual declines in the last few decades, but retail still represents 11% of employment in the economy and 6% of the economy in terms of value added. In the years since 2009, about the time when the expression "end of retail" seems to have first caught on, both figures have held remarkably steady.

The authors also find that the growth of e-commerce looms larger in popular consciousness than in the national income and product accounts. The figure below shows that, with the exception of a few susceptible product categories like music and books, e-commerce (sales conducted online for goods delivered electronically or by mail) represents just a fraction of total sales for most goods. E-commerce sales totaled $260 billion in 2013, which is an impressive figure, but less than 6% of the $4.5 trillion merchandise economy in the United States. Even under an optimistic set of assumptions, e-commerce penetration will still be less than 20% a decade from now according to the authors' projections.

E-commerce yet to catch on in some product categories
The authors extrapolate future e-commerce sales in various product categories using a very simple set of assumptions. So far, e-commerce has flourished in sectors where products are uniform and can be easily transmitted, while it has lagged in sectors where products are highly customized, heavy relative to value, or perishable. 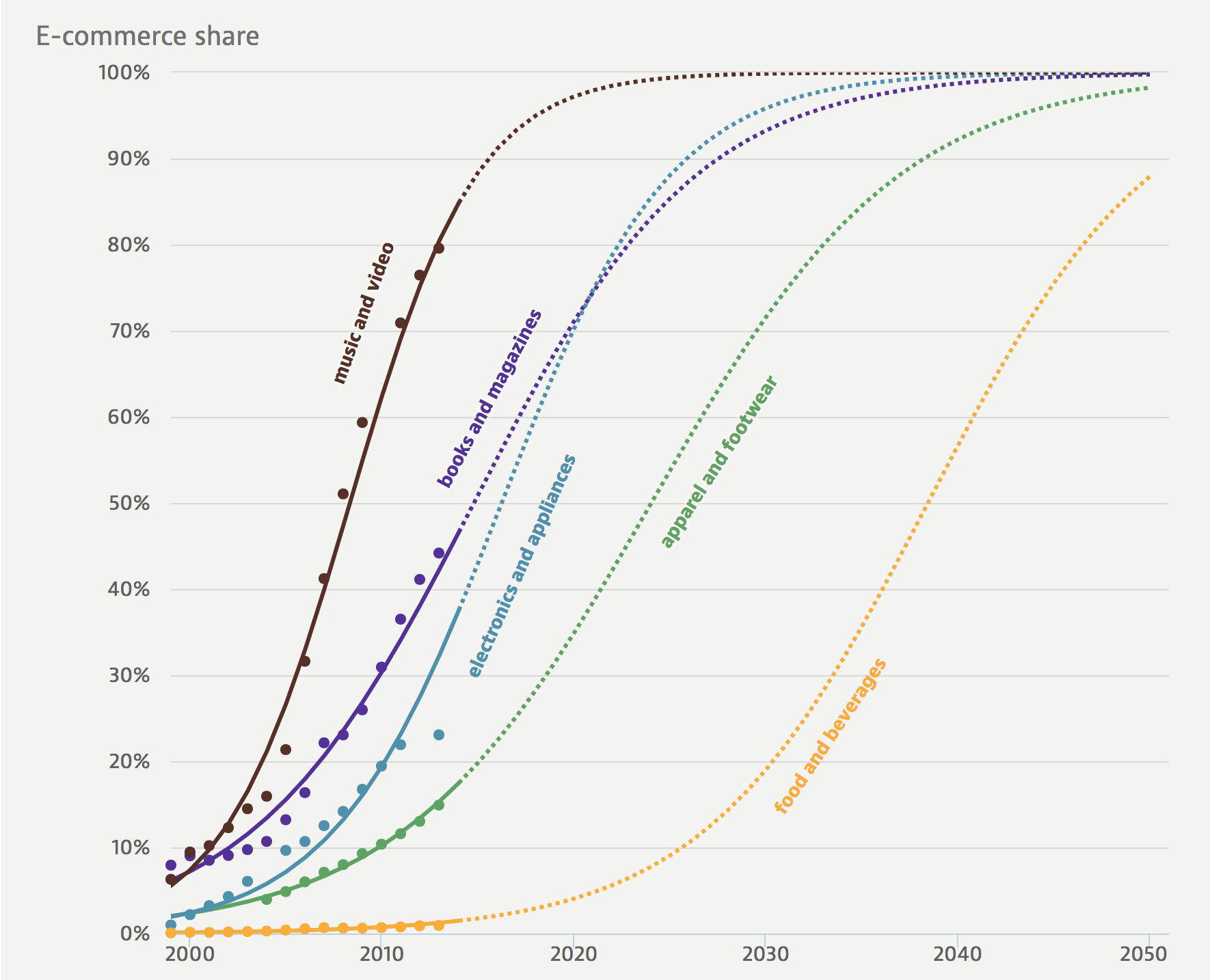 There are definitely some discernible trends in the data though. Labor productivity growth in the retail sector has outpaced productivity growth in the rest of the economy over the past 25 years. This means that retailers are getting more out of each hour of employees' labor. However, labor compensation has been growing much more slowly, indicating that these gains are not flowing to workers. The authors' analysis shows that the lower cost of retailing each item has been partially passed on to consumers, and partially absorbed as profits.

There is a lively debate about the source of productivity growth in retail. One study found that growth during the 1990s was almost entirely due to the entry of new, more efficient store locations (especially chain expansion) and the exit of "mom and pop" non-chain stores. Apparently these larger chains were better positioned to harness new information technology like the barcode, perhaps thanks to larger scale and better management practices.

One manifestation of this trend is the rise of what are called "warehouse clubs and supercenters" in the census data. These are large retail outlets characterized by grocery sales in addition to new merchandise like apparel and appliances (this does not include many big-box stores that do not carry groceries). Combining a no-frills shopping experience with bulk discounts and a subscription model, these firms have grown even faster than the online retailer sector since 1992. This is in keeping with a general increase in scale across the industry. The authors find that the average retail outlet is part of a larger chain and a bigger shopping center than it was in the 1990s, and has more employees as well.

While many of these proposed productivity drivers involve digital and other information technologies, they are as likely to be operating on the “back end” (selection of offerings, distribution, inventory management, and so on) as on the customer-facing “front end” (websites, online advertising, and the like). Thus, the productivity gains of information technologies need not be harnessed exclusively or even primarily through e-commerce retailing.

E-commerce may have actually aided and abetted the rise of massive brick-and-mortar retailers. In a previous study the authors found that the emergence of e-commerce in two industries (bookstores and auto dealers) shifted consumers toward larger physical retailers in both cases. This is because e-commerce technology makes it easier for consumers to search around for the best deal. This puts pressure on smaller, less-efficient firms to shape up or lose market share.

Ultimately, the authors see two types of firms with starkly different characteristics succeeding in this sector. E-commerce firms are smaller, highly productive, and sell to a geographically dispersed clientele. Warehouse clubs and supercenters, by contrast, are operated by huge firms, with somewhat lower labor productivity, and serve a market concentrated in big population centers.

Some have suggested that this portends a future of retail where merchants expand across both formats and take the best from both by offering algorithmic recommendation engines and reputational scoring as well as opportunities for testing and discovering new products in person. That vision may have inspired e-commerce giant Amazon's recent foray into brick-and-mortar retail (the company opened its first offline bookstore in Seattle earlier this month). The disparate trends in the data suggest that this emerging "bricks-and-clicks" model may eventually win the day. ♦

"The Ongoing Evolution of US Retail: A Format Tug-of-War" appears in the Fall 2015 issue of the Journal of Economic Perspectives.

How seniority arrangements could stop the next sovereign default