The promise of seniority arrangements for sovereign debt 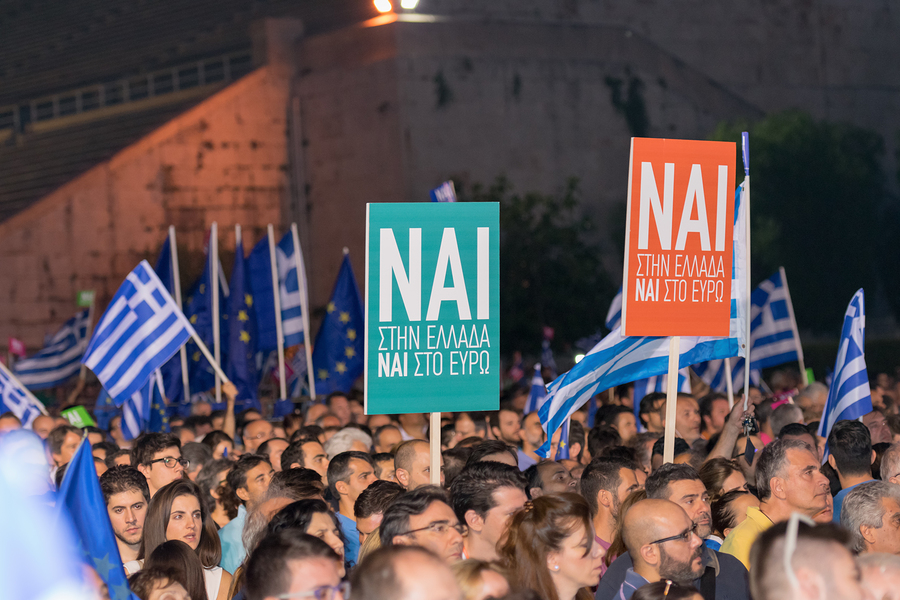 Protesters rally in Athens, Greece on July 3, 2015. In 2012, Greece shed about $130 billion of debt as part of the largest sovereign default on record.

The financial world was captivated this past summer as the ruling Syriza party in Greece considered defaulting on billions of dollars in debts, and every new development in the saga prompted stock market gyrations and apocalyptic headlines. But sovereign default – essentially the national equivalent of bankruptcy – is actually a pretty common event, at least in the developing world. There have been hundreds of separate episodes of sovereign debt defaults in recent decades, with some ranging into the tens of billions of dollars.

Sovereign defaults are painful for all involved: creditors lose some of their investment, the debtor government loses access to capital markets, and residents of the debtor country often face economic calamity and crushing austerity.

Some level of default activity is probably inevitable, but some economists believe defaults happen more often than necessary because of a phenomenon called debt dilution. Whenever a country with mounting debts decides to issue new bonds, default becomes more likely. That decision corrodes the value of any bonds already issued to earlier creditors because it increases the chance that those earlier bonds won't be repaid at full value.

Investors aren't stupid – they see the potential for their debt to eventually be diluted, so before investing they demand higher interest rates from sovereign governments than they otherwise might. This makes credit more expensive in the first place, which in turn makes debt dilution more tempting and defaults ultimately more likely. Argentina ran into this problem when it issued hundreds of rounds of new debt in the runup to a painful 2001 default that was the largest on record at the time. An article appearing in this month's issue of the American Economic Review considers a potential solution to the debt dilution problem.

In A Seniority Arrangement for Sovereign Debt (PDF), authors Satyajit Chatterjee and Burcu Eyigungor build a model to simulate how sovereign debt markets would work under a different legal arrangement known as seniority. In a typical sovereign default, all creditors take what is known as "haircut" and all bonds are repaid at the same reduced rate. Under a seniority arrangement, by contrast, creditors who invested earlier in time ("senior creditors") are first in line for repayment. Senior creditors might get their bonds paid in full while junior creditors face a deeper haircut or even a total loss.

This simple contractual change realigns economic incentives and undercuts debt dilution because early creditors don't have to worry so much about what the sovereign does after bonds are issued. Creditors can rest assured that their debt won't be diluted by future bond issues because they are first in line for repayment if the country ends up defaulting. Debtor countries, meanwhile, can't rely on debt dilution to keep borrowing. A country on the brink of default would probably not be able to borrow at all because everyone would realize that any new rounds of bonds would never get paid.

The debt dilution problem only exists in the first place because sovereign nations lack a way to commit themselves to not issuing more debt down the road. If a country could pledge not to issue any more bonds in the next five years, investors would be reassured even without a seniority arrangement. But if that country falls on tough times and realizes it needs more money, it can break its pledge and the first round of investors can't really do anything about it, short of raising an army to invade the debtor's capital.

Sovereign governments would actually love to be able commit to not issuing new debt in this situation (because creditors would then pay more for their bonds), but cannot credibly do so without sacrificing at least some of their sovereignty.

Understanding how this reassurance would actually change the valuation of debt is important because the hope is that seniority arrangements would increase the value of the debt thatdoes get issued, thus allowing countries to borrow at more favorable interest rates and hopefully avoid falling into too much debt.

Estimating this change in value is difficult because a market with seniority arrangements would be significantly more complicated that a traditional bond market. With traditional government-issued bonds, all bonds are equivalent and worth the same amount. With seniority bonds, the value of each bond is affected by the order of issue, and bonds can only be traded if buyers and sellers know exactly where each bond falls in the seniority pecking order.

This is a tricky problem not only for real-world bond traders but also for economists trying to simulate such a market. The authors develop a tractable way to approximate a seniority system by assigning each bond a unique rank that determines its price (this is slightly different than a real-world system, which could have billions of bonds issued at the exact same level of seniority). The authors' model also considers a hybrid system where half of a bond's value is repaid on a seniority basis, and half on a traditional, equal-footing basis.

Future research efforts could be usefully directed toward a better understanding of the nature and costs of the institutional preconditions for enforcing seniority (the setup of a bond registry and the legal design of sovereign debt contracts with a seniority clause being the two most important).

The authors apply their model to Argentina, which experienced a large default in 2001 and which has been the focus of most sovereign debt research in recent years (the country defaulted again in 2014 after the authors conducted their analysis). Using historical data about trends in GDP and output volatility in Argentina, global interest rates, the economic costs of default, and average time to resolve sovereign debt default disputes, they simulate an alternative history of Argentine debt over the years 1980 to 2001 where the proposed seniority arrangement is in place.

Their results show that the simulated Argentina benefits in two main ways – lower interest rates for borrowing (which allows it to carry more debt safely) and less frequent defaults (which avoids default-induced economic downturns). All told, the total benefits to creditors and to Argentina and its citizens are equivalent to about 2% of Argentina's economy per year.

This represents a huge potential savings, even if other countries wouldn't have benefitted quite as much as Argentina. If seniority debt arrangements can meaningfully reduce the frequency of default, why isn't it standard practice for sovereign borrowers? The costs of administering such a system with millions of differentiated bonds could be one consideration, although if the authors' estimates are close to the mark, those costs would certainly be worth bearing. An uncertain or untested legal status for the seniority claims is another concern. The authors close with a call for more research into the logistics of actually implementing these arrangements with an eye toward reducing painful sovereign defaults in the future. ♦

"A Seniority Arrangement for Sovereign Debt" appears in the December 2015 issue of the American Economic Review.