Reforms to African agriculture markets didn’t help farmers or consumers as intended. The reason seems to be with how intermediary traders set prices. 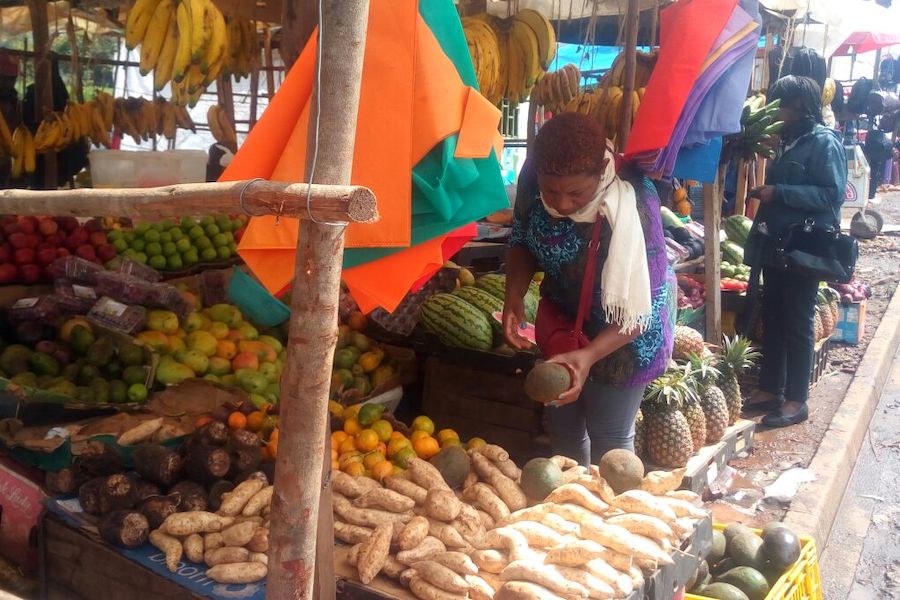 A consumer browses fruit at a Kenyan food market.

Someone was making a lot of money in Kenya's food markets, but it wasn’t the farmers.

Food producers seemed to always be selling at bargain basement prices. Meanwhile, individual consumers were paying a premium for staple foods like maize.

This wasn’t an issue of government grift. Liberalizing reforms that swept through Africa in the 1980s and ‘90s passed control to the private sector. And yet, market competition didn’t seem to be functioning as it should.

In the December American Economic Review, authors Lauren Falcao Bergquist and Michael Dinerstein say the issues aren’t with the farmers or the consumers—it’s with the intermediaries connecting the two. Wholesale traders, particularly the large ones, have outsized influence on food markets and are engaged in a kind of tacit collusion to ensure they collect the biggest profits.

“It looks like these markets are not perfectly competitive,” Bergquist told the AEA in a recent Zoom interview. “In fact, our results suggest that they're indistinguishable from a perfectly collusive case."

Their paper presents some of the first experimental evidence on how these food brokers operate and highlights some of the flaws that prevent markets from being perfectly competitive.

That’s not to say they're sitting down in the market before the market day starts in some smoky backroom and saying 'OK, what price should we set today.' There can be tacit collusion, where traders aren't explicitly agreeing on a market price, but they're sort of implicitly responding to each other in a way that they're agreeing to not lower their price.

Bergquist and Dinerstein performed three randomized control trials in Kenyan maize (corn) markets, which is the country’s primary staple crop. They wanted to measure the degree of competition among wholesale traders, understand the implications for social welfare, and test whether new traders could make a market more competitive.

First, they offered traders a subsidy for every bag of maize sold, then measured whether they passed that savings onto consumers. In a perfectly competitive market, traders would use most of the money to lower prices. That’s not exactly what happened. Wholesalers passed along only 22 percent of the savings to consumers.

The second experiment measured demand by offering customers a subsidy for each bag, effectively lowering the price they’d negotiated with the trader.  Once the authors knew demand, they could pin down much of the cost savings wholesalers would have passed along to customers if they had been colluding. It turned out to be almost exactly 22 percent—pretty clear evidence that traders were not competing.

Bringing in New Trade
To boost competition, the authors offered subsidies to Kenyan maize traders if they would enter new markets. Below are various factors that affected traders' willingness to take the offer. Being a large firm with higher profits and having contacts raised the likelihood of entering a new market, while distance dissuaded potential new entrants. 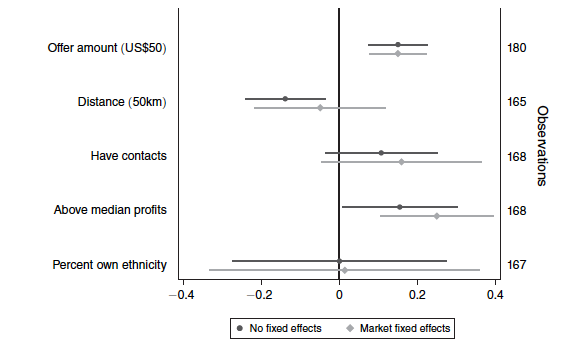 Source: Figure 8 from Bergquist and Dinerstein (2020)

Finally, the authors tested whether bringing in new traders would have much of an effect on competition. Would prices change much if there were some new sellers in the market?

They offered to pay outside traders if they’d be willing to set up shop in a new market. This turned out to be difficult. Many were reluctant to do so, especially if they didn’t have established contacts already there. And the subsidies were fairly generous, up to 115 percent of average profits.

Even once they agreed to enter, new traders didn’t have much of an impact on competition. Each additional trader reduced prices by only about 1 percent.

It appeared that everyone was essentially agreeing to stick to the same price.

“That’s not to say they're sitting down in the market before the market day starts in some smoky backroom and saying 'OK, what price should we set today,'” Bergquist said. “There can be tacit collusion, where traders aren't explicitly agreeing on a market price, but they're sort of implicitly responding to each other in a way that they're agreeing to not lower their price."

She said it could be tied to the physical layout of the open air markets. Traders often sell next to each other, so it's easy to see and hear what everyone is charging.

But Bergquist doesn’t think the solution is to go back to the government-run system that existed prior to the liberalizing reforms. That system was a drain on treasuries, provided opportunities for corruption, and often resulted in supply not meeting demand.

Nor does she think antitrust regulation is the answer because enforcement would be an issue.

One possibility is digital clearinghouses, which she likened to an eBay or Alibaba for agriculture markets, that would make it easier for new traders to enter markets and potentially “shake things up.”

“Competition and Entry in Agricultural Markets: Experimental Evidence from Kenya” appears in the December 2020 issue of the American Economic Review.