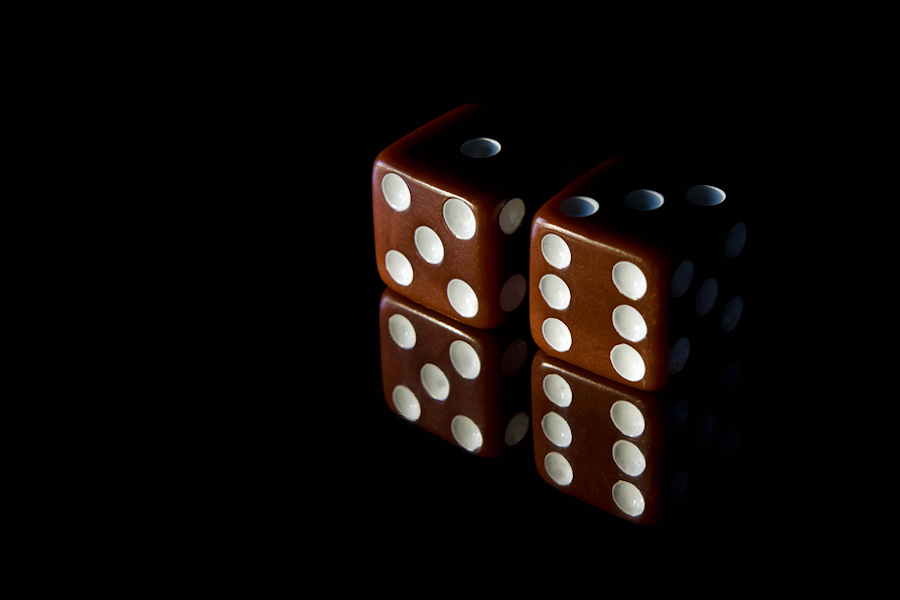 When you’re investing, one of the most basic choices you have to make is how much risk you want to take on. Assessing your own risk tolerance is the first step, but you must also gauge the risk level of all the various investment options out there, ranging from the volatility of foreign penny stocks or leveraged commodity funds to the safety of a savings account at the local bank. Just how risky is investing in the stock market anyway?

Most people shy away from unnecessary risks, so the market has to provide higher returns for riskier investment options like stocks as opposed to safer options like bonds. This creates a relationship between risk and reward, and complicates the lives of investors who want high returns but also don’t want to see their portfolios constantly swing up and down.

So, is it worth taking the risk to invest in stocks instead of bonds? Judging solely by the experience of American financial markets over the past several decades, stocks look like a very good deal.

Say you wanted to invest money for 20 years leading up to retirement, and had to decide between two investment options: ultra safe government bonds or a fund covering the stocks in the S&P 500 (note: most experts would advise investing in a mix of these and other assets, not just one or the other). If you were doing this sometime during the period 1928 to 2016 in the United States, you’d almost definitely be better off choosing the stocks.

The figure below illustrates the wide gap in returns between U.S. stocks and bonds during this era. Clearly the stock-based investments (in red) bounce around a lot, and in the worst years the stock market can lose 30 percent or more of its value. But over time and on average, the upward trends in stock prices usually leave the stock investor better off than the bond investor.

Since 1928, U.S. stocks have massively outperformed bonds
Total real return for a hypothetical $100 invested for each of the seventy 20-year spans between 1928-47 and 1997-2016. Investments in the U.S. stock market (S&P 500) are in red, investments in short-term U.S. treasury bills are in blue. Best, worst, and average performances are highlighted for each investment class. 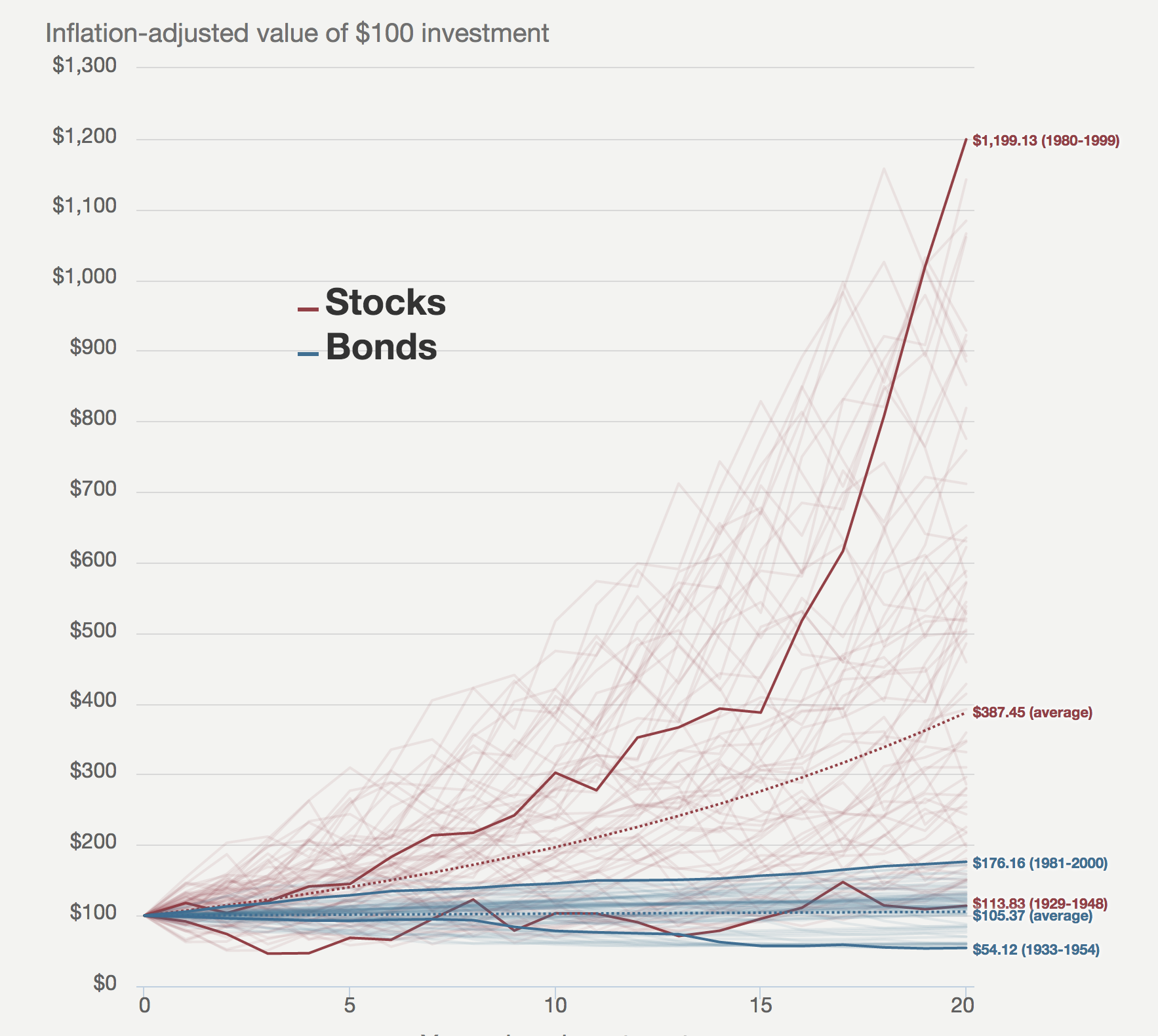 Even if you timed your 20-year window impeccably badly, investing at the market peak before Black Tuesday in 1929 and bailing out in the midst of the postwar recession in 1948, your stock portfolio would still have done better than the average 20-year bond return over that time.

On some level, this is to be expected, because stocks are riskier than U.S. government bonds and naturally carry higher returns. Still, economists have long noted a disconnect between the moderate riskiness of stock investments in the historical data and their huge return premium over bonds, which has come to be known as the “equity premium puzzle.”

Sure, stocks are risky. But the gap in returns suggests investors have been extraordinarily timid about investing in stocks. Why aren’t investors flocking to stocks when these great returns are available?

There are a few ways to reconcile the high returns of stocks with their apparently modest risk. Maybe investors are just way more risk-averse than we think, and their cautious investment behavior makes sense. Another alternative is that investors perceive risks bubbling under the surface of the stock market that the economists don’t see in the historical record.

Why might economists be missing the risk? One possibility is the so-called “peso problem” – the risk is something so bizarre and infrequent that it doesn’t happen even once during a historical period under study.

Under this theory, the prospect of a huge disaster like a trade war or global pandemic spooks investors enough to drive them away from risky investments, even though stocks have been so profitable during the (relatively tranquil) recent past.

There is also the possibility that small, long-run risks that add up over time are hard to detect in any one country during one lifetime. A study appearing in this month’s issue of the American Economic Journal: Macroeconomics considers this more subtle type of risk and whether it can explain investors’ puzzling aversion to stocks.

Authors Emi Nakamura, Dmitriy Sergeyev, and Jón Steinsson point out that economic volatility is not constant over time. Periods like the 1970s and the last decade have seen higher global uncertainty and volatile growth rates, while other periods like the “Great Moderation” were much more stable and predictable.

Growth rates have also fluctuated, thanks to changes in technology, political arrangements, and cultural forces, with periods of routinely high growth (like the years after World War II) interspersed with prolonged slumps. There is so much year-to-year variation in the economy that it can be hard to detect these changes in real time, and they may still be up for debate decades from now.

Still, the risks are there. Investors who are considering a long-term investment in stocks may be reassured by the recent historical data, but they also have to grapple with the fact that the next 20 years might suddenly become a lot more volatile or see the global economy settle onto a slower-growth trajectory.

The authors hypothesize that a full accounting of these long-run risks could help explain why investors seem so reluctant to take on riskier investments. They use a dataset on overall consumption levels spanning 16 developed countries over more than a hundred years to increase the chance that they can detect small changes in growth trajectories, and ones that are correlated across countries.

Even if one believes that events such as WWI, WWII, and the Great Depression will not occur in the future, one still has to contend with the existence of smaller but much more persistent changes in growth rates and volatility.

They find that their sample of countries vary in their underlying levels of economic volatility and how insulated they are from global trends, but that all countries’ stock markets are exposed to significant long-run risks.

Even worse news for investors is that periods of low growth and high volatility tend to arrive at the same time, even when disasters like the Great Depression and World War II are excluded. They also find that U.S. markets have been calm over the last 100 years relative to markets in western Europe. This means that stocks are a riskier investment than they seemed under the assumption that long-run growth rates are unchanging and that the American experience is representative.

The authors’ model still can’t find enough risk to fully reconcile the equity premium puzzle, but it helps underline the role that long-run risks play in investor psychology. As debate rages about the direction of the world economy in the next few years, and whether we will return to the high growth rates and stable markets of recent decades, investors will likely continue to hedge their bets.

Growth-Rate and Uncertainty Shocks in Consumption: Cross-Country Evidence appears in the January 2017 issue of the American Economic Journal: Macroeconomics.