How does the relentless churn of jobs in the modern economy affect happiness? 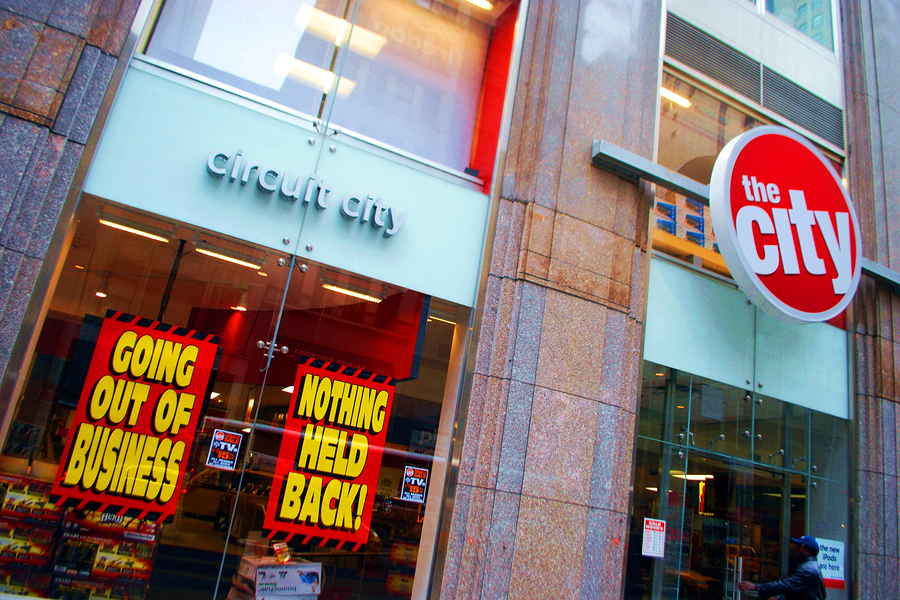 A liquidation sale at a Circuit City store in New York City, January 24, 2009.

Video rental stores disappearing from the landscape with the rise of streaming services. Taxi drivers being displaced by autonomous vehicles. Bookstores and retail stores going bankrupt as more and more retail customers move online or to warehouse stores.

These are textbook examples of “creative destruction,” a term most closely associated with mid-twentieth century economist Joseph Schumpeter. Schumpeter argued that innovations, like new technologies and new management practices, are inevitably going to create disruption and job loss as flat-footed older companies struggle to keep up and entire communities are thrown out of work.

Schumpeter said that this cycle was inevitable, “the essential fact about capitalism,” and predicted it was unsustainable and would lead to capitalism’s eventual downfall. In the 1940s when he coined the term, his illustrative examples were about the replacement of small craft steel factories with U.S. Steel and the way that the railroad disrupted agriculture in the American west. With the advent of new communication and transportation technologies, creative destruction is still going strong in the 21st century, roiling global politics and leaving shattered communities in its wake.

The ill effects of creative destruction have led some to question whether people are actually any happier or better off now than 50 years ago. In the most pessimistic view, all of the disruptive new technologies of recent decades were largely a chaotic waste of time. They upended labor markets without creating any lasting improvements in happiness, despite the fact that modern society has grown to depend on these advancements.

If we could somehow freeze the economy and halt innovation so job markets could become much more stable, would it be a worthwhile trade? It would be a dramatic reversal of centuries of economic policy efforts, but that’s the provocative question underlying a study appearing in this month’s issue of the American Economic Review by Philippe Aghion, Ufuk Akcigit, Angus Deaton, and Alexandra Roulet.

Where did labor markets experience the most upheaval?
Average unemployment rate and job turnover rate (job creation rate plus job destruction rate) for 363 U.S. metropolitian areas over the years 2008–2011. 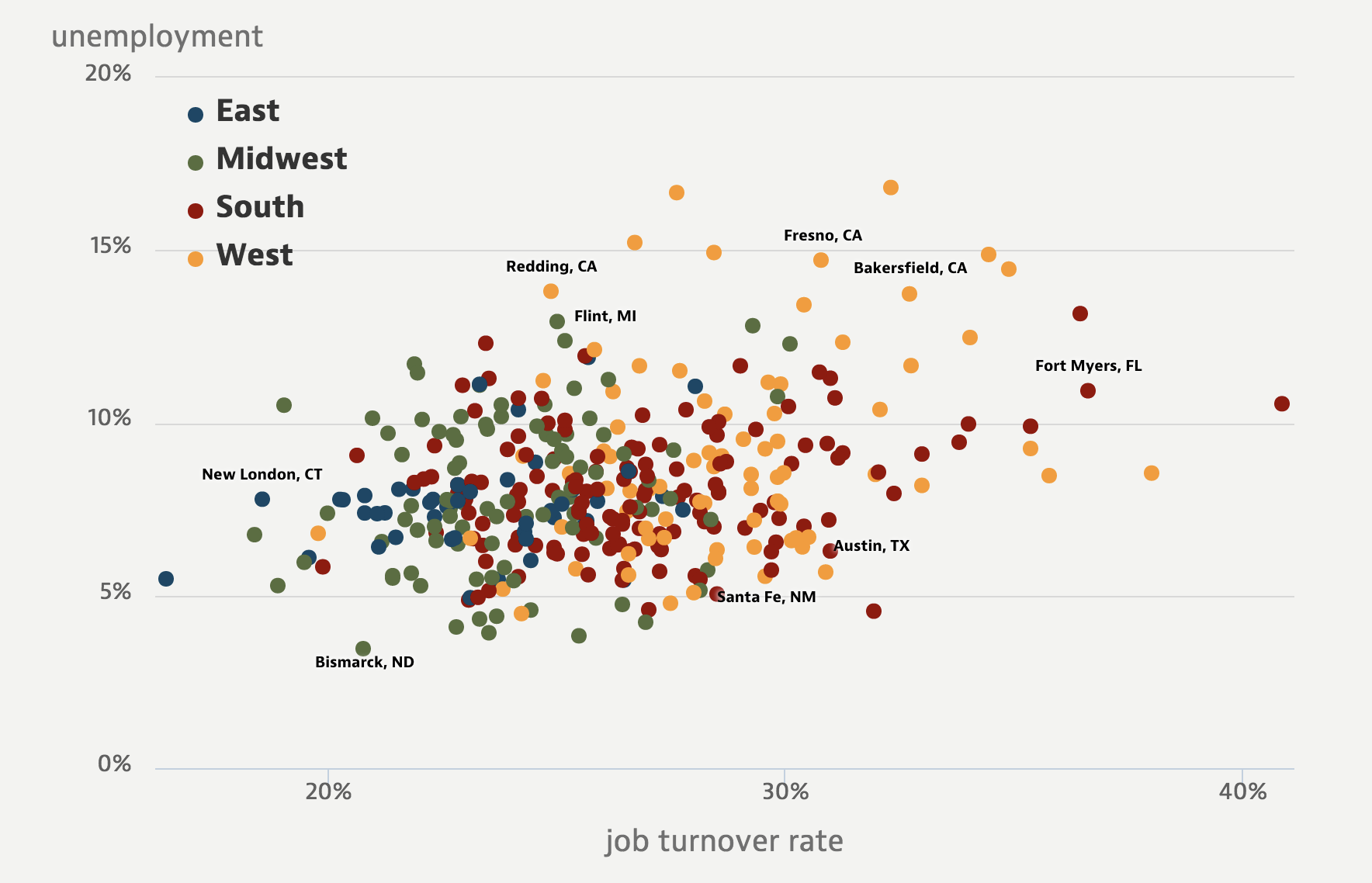 The authors look to Gallup survey data on subjective well-being in the form of self-reported scores on the Cantril scale, which asks respondents to consider how close they are to their best possible life, and how close they will be in five years. Are the cities with more job turnover happier places to live, or does the churn tend to wear down the spirits of local workers?

This approach lets people who are on the front lines of creative destruction in today’s economy weigh in on whether the long-term gains promised by new technologies are worth the up-front turmoil in job markets. The authors develop a simple model of job destruction driven by technological change and predict that, for a given level of unemployment, more creative destruction should improve self-reported life satisfaction. Ultimately, this is because economic growth leads to more job openings and higher earnings in the future.

The authors’ model is purposefully simple and it doesn’t incorporate factors like sectoral change or job retraining. Nevertheless, it holds up well in the data across more than 300 U.S. metropolitan areas. Job turnover is associated with subjective well-being after controlling for unemployment, and the negative effects of job losses on happiness are cushioned somewhat in states with more generous unemployment insurance.

In spite of a now large literature on self-reported well-being, there is no general consensus on how seriously these SWB measures should be taken, or on exactly what they mean.

The results suggest that job turnover and labor market dynamism might be an underrated factor of quality of life, perhaps nearly as important as unemployment in explaining happiness levels in differents parts of the country.

Economists are still wrestling with the question of how subjective well-being measures like Gallup’s should be interpreted, and whether people are trying to maximize their own life satisfaction or have more complicated goals. The results from this study suggest that subjective well-being can capture both the present pains and future benefits, and bolster recent research challenging the Easterlin hypothesis.

Creative Destruction and Subjective Well-Being appears in the December 2016 issue of the American Economic Review.

How decision-making and cognitive function are affected by payday