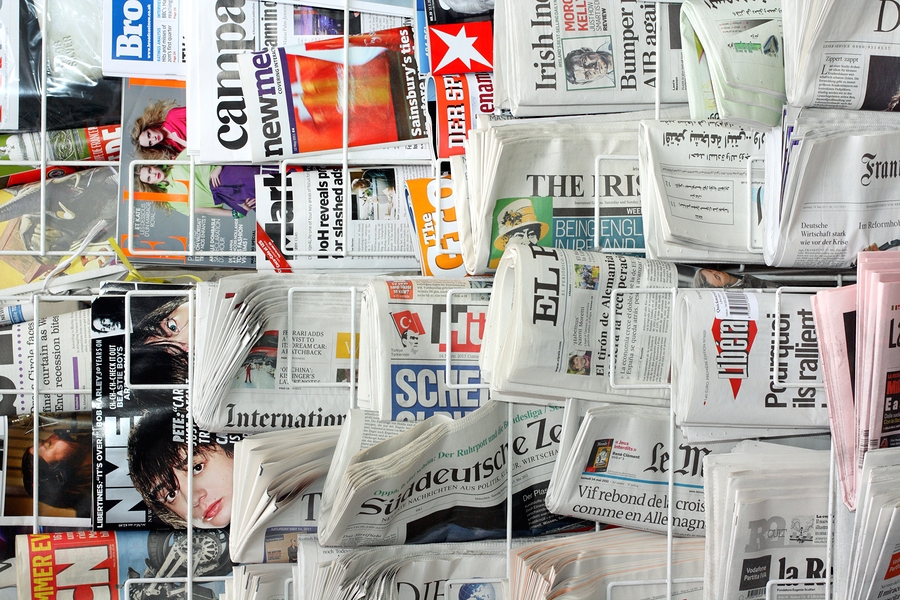 Newspapers for sale in London, England. Recent research shows that the media can play a big role in mediating the relationship between politicians and their constituents.

Voters have more options than ever if they want to bypass traditional news media to get information about politicians, and candidates with social media savvy can communicate directly to voters like never before. But the media still serves to mediate the relationship between politicians and their constituents, even politicians in lower-profile offices. An article appearing in this month's issue of the American Economic Journal: Applied Economics tries to measure the effect of media scrutiny on U.S. state judges and finds that media organizations, in this case newspapers, still play a major role in the political process.

In The Judge, the Politician, and the Press: Newspaper Coverage and Criminal Sentencing Across Electoral Systems (PDF), authors Claire Lim, James Snyder, and David Strömberg note that voters in the U.S. tend to think that criminal sentences are generally too lenient. The authors' hypothesis is that state judges who receive more attention from the media will be quicker to throw the book at convicted criminals, because they are being watched more closely by voters.

But newspaper coverage is not random, so the authors cannot just compare judges with more coverage to those who get less publicity and conclude that media scrutiny is affecting their behavior. Instead, the authors devise a natural experiment by looking to the circulation patterns of the newspapers that report on state court proceedings.

[M]onitoring judicial behavior is difficult for voters, and given their weak prior beliefs, even a single news story covering apparent judicial malfeasance can decisively influence elections. As we show empirically, there is tremendous variation in our sample in the amount of newspaper coverage about judges, ranging from no coverage to hundreds of articles per newspaper and year.

The authors use the concept of "congruence" which in this context is a measure of how closely a state judicial district's boundaries line up with newspaper media markets. A district whose major newspapers are focused inside the district is highly congruent. A district whose newspapers have significant circulation outside the district are less congruent. The authors assign each district a congruence rating between 0 and 1 to indicate how closely it overlaps with newspaper audiences.

A highly-congruent district will attract more media scrutiny, according to the authors' hypothesis, because local newspapers have more interest in covering cases that are relevant to where their readership lives.

The authors illustrate the congruence concept with an example from Florida. The judicial district covering Jacksonville is home to 76% of the readership of the Florida Times-Union, which dominates the local market. Meanwhile, the district covering nearby Orlando is less congruent because the largest newspaper in the area, the Orlando Sentinel, sells the bulk of its papers across the district line in the Orlando suburbs. As a result, the Times-Union will be more inclined to cover local judicial happenings than the Sentinel because they will be more relevant to a broader part of its readership. Judges in Orlando will face less scrutiny than judges in Jacksonville, simply by virtue of the topography of local newspaper markets.

It may not be obvious that newspaper editors would actually be this calculating in their assignments to reporters, but an analysis of thousands of articles in over 500 newspapers from 2004 and 2005 reveals a sharp correlation between a district's congruence rating and the number of mentions of a judge's name in a newspaper. It seems newspapers really do cover a judge's cases more when a greater share of its readers live in her district.

After showing that a district’s congruence is not correlated with the political leanings of its voters or the types of crimes committed there, the authors conclude that congruence can be treated as a random factor for the purposes of predicting sentencing harshness. This means that some judges (in high-congruence districts) just happen to face more scrutiny while others (in low-congruence districts) just happen to avoid the spotlight.

For some judges, more scrutiny led to harsher sentences
Average sentencing harshness across a sample judicial districts, plotted against “congruence” (a measure of how judicial districts overlap with newspaper circulations). Districts with nonpartisan elected judges are highlighted.
Note: Only a subset of districts with moderate electorates are shown.
Source: dataset provided by Lim et al. (2015)

With their congruence measure in hand, the authors develop a model to determine whether judges who randomly face more scrutiny respond by handing down harsher sentences. The authors analyze data from over a million criminal cases from 1986 to 2006 and index the harshness of each sentence by comparing it to minimum and maximum allowable punishments for each type of conviction. Combining this with several control variables like the political leanings of the district and population density, the authors model the harshness of judicial rulings as a function of congruence.

The author’s estimates show that judges in highly congruent districts are more likely to apply harsh sentences – but only some judges. Specifically, judges who run in nonpartisan elections (i.e. without any party labels on the ballot) seem most sensitive to media scrutiny. Judges who are appointed by governors or who run in partisan elections showed no statistically-detectable behavioral shift.

Why is the method of election so important? The authors hypothesize that, when it comes time for voters to make their selection, party labels will tend to "crowd out" information from the news. Judges who run in partisan elections count on their party label to carry them in the next election, and these judges have less reason to worry about how they will be covered in local media. Meanwhile, judges who are directly appointed by governors have even less incentive to appeal to voters.

In nonpartisan elections, by contrast, judicial candidates are typically listed without political parties or any other identifying information beside their name. In these contests many voters have little to go on, and even a few newspaper articles mentioning the incumbent judge could easily swing the election one way or the other.

The study covers sentencing data from 1986 to 2006, so it remains to be seen if this relationship will hold up in an age of declining local newspaper influence. But the more relevant finding might be the way that the response to news coverage differed depending on the electoral incentives of the judge in question. The authors call for additional research into whether other nonpartisan officials like school board superintendents may also be sensitive to media scrutiny, and understanding how media attention affects the behavior of other low-profile office holders like state legislators. The media clearly has a large effect on politician behavior, but researchers are still working out exactly how it works. ♦

"The Judge, the Politician, and the Press: Newspaper Coverage and Criminal Sentencing Across Electoral Systems" appears in the October 2015 issue of the American Economic Journal: Applied Economics.