Modest nudges can have an outsize effect on educational attainment 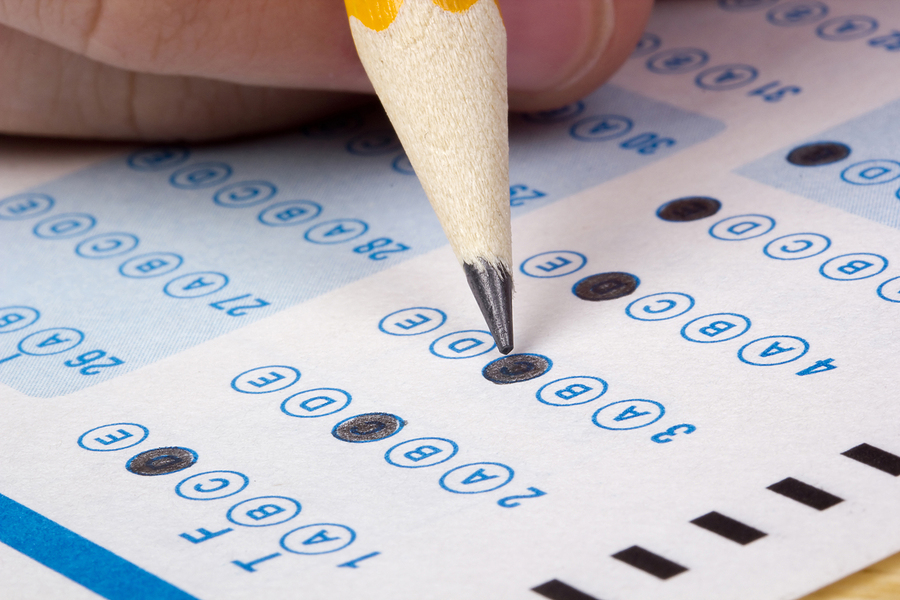 Student taking a scantron-based exam. U.S. high school students differ in their ease of access to the SAT based on their proximity to test centers and other factors.

Recent research has highlighted the power of small nudges to affect the behavior of students who are on the cusp of college enrollment. The waiver of a $6 ACT score-reporting fee substantially increased the number of college applications submitted by test-takers. Offers of help in filling out federal student-aid forms boosted college attendance and graduation rates. Text message reminders sent to admitted students over the summer reduced the chances that they would fail to show up to college in the fall, combating a phenomenon known as "summer melt."

In each case, students and their families were offered a small bit of help clearing a logistical hurdle, with a dramatic effect on college attainment or graduation rates that are measurable even years later.

An even greater hurdle for college-bound students is the college entrance exam, which is a test of academic skills but also, for some, a test of coordination. Students might have to navigate the registration process on their own, or arrange travel to a distant testing center on the day of the exam. Here too, small nudges have the potential to create big gains, and New York City Public Schools recently announced it would offer a free administration of the SAT to all its eleventh graders. An article appearing in the October issue of the American Economic Journal: Applied Economics looks to see if initiatives to ease access to the SAT can boost the college prospects of high school students.

In The Effect of Access to College Assessments on Enrollment and Attainment (PDF), author George Bulman analyzes various events that reduce barriers to the SAT exam such as a new testing center opening at a student's home high school and new district policies to waive exam fees or allow for free in-school test administration. He collects historical data on SAT test center locations and combines test results with enrollment data from the National Student Clearinghouse to measure students' outcomes through the college application process and over the course of their college careers.

Bulman tracks how outcomes change over time before and after schools see a policy change like a new test center opening. A crucial factor in interpreting the results is that not all students take the exam, and the makeup of students who take the exam changes when these policies are in place.

Only about half of students take the SAT in the 22 states where the SAT is the dominant test, and the decision to register for and take the exam is far from random. Some students are sufficiently motivated that they would sign up for the SAT regardless of the logistical hurdles, while others wouldn't sign up for the exam even if the College Board offered to come administer it in their homes. A small group of students in the middle is on the margin – they probably wouldn’t take the test if the closest test center were an hour away, but they would if registration was automatic and the test was offered at their school at a convenient time. 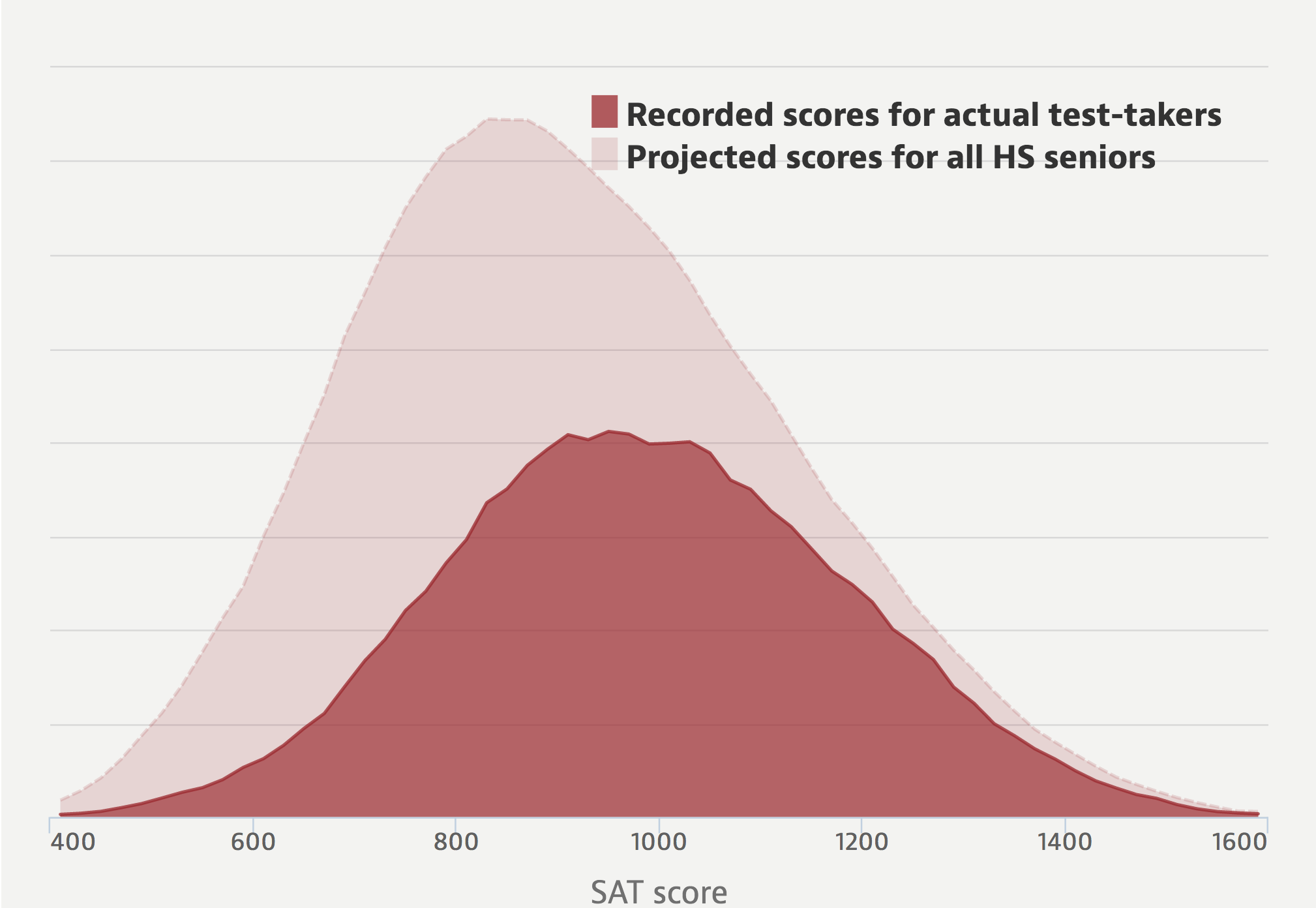 Bulman focuses on the composition and trajectory of these marginal students (who he terms "new takers") to determine the effective impact of improved access to the SAT. It is impossible to point to any one student in the data and label that student as a new taker because we never observe the same student in two different situations, for example, one where the student has a nearby test center and another where she has a more distant one. But by comparing what happens in schools with new test centers or auto-registration to similar schools with no such innovations, Bulman can infer the distribution of ability levels among the "new takers" and see how likely they are to attend and graduate college a few years down the line.

Based on a model that incorporates data on hundreds of test center openings and closings between 2004 and 2011, Bulman estimates that a test center at a high school increases the SAT taking rate at that school by about 4 percentage points (so a typical school would go from 52% taking the exam to 56%, for example). About a third of those new takers go on to attend a four-year college and complete on average the same number of semesters as other students who attend. Few if any of these students would have attended college if they hadn’t sat for the exam.

Bulman also focuses on outcomes for new takers of high ability (those with scores above 1000 on the 1600-point SAT scale). He finds that the new takers who end up going to college overwhelmingly come from this high-ability group, which may explain why they tend to complete just as many college semesters as their classmates. However, they are still much less likely to attend college than their high-ability peers who are not new takers. This means there are still some significant barriers for these students beyond just access to the SAT.

The results suggest that the marginal students induced to attend college are overwhelmingly those with the highest aptitude. Thus, admissions exams policies stand in contrast to more traditional policies that reduce the price of attendance equally for all potential students (e.g., grants, loans, and tax credits).

So while improving SAT access isn’t a silver bullet for getting this group into college, it does seem to measurably increase rates of college matriculation. Bulman estimates that a new test center at a school without a center will increase 4-year college enrollment by 1.6 percentage points among students at the school. Automatic registration and free in-school administration policies are more expensive but induce an effect that is about twice as big.

This may not sound like much, but the benefits of college are so large that even a small increase in enrollment can count as a major success. Using estimates from previous studies on the returns to a college education, the author calculates that each new taker derives tens of thousands of dollars in expected lifetime earnings from a new SAT center opening simply because it increases the odds he will ultimately attend and graduate from college.

The fact that improving access to the SAT helps students make it to college is certainly encouraging news. At the same time, it implies that there are high-ability high school seniors who are poised for success in college and yet do not end up making it there just because there happens not to be an SAT offered at their home high schools. This suggests a huge missed opportunity for society: a student does not reach her full academic potential when a small, relatively cheap initiative like opening a new test center could have nudged her toward college. ♦

"The Effect of Access to College Assessments on Enrollment and Attainment" appears in the October 2015 issue of the American Economic Journal: Applied Economics.