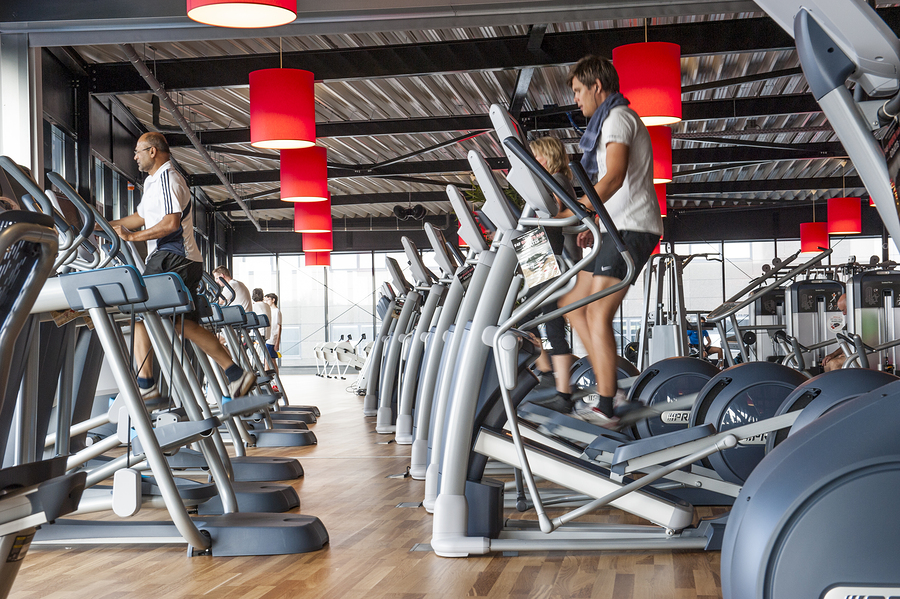 Gym-goers working out on elliptical machines in Amersfoort, Netherlands in September 2014.

As the new year approaches, many will resolve to make 2016 the year they start working out more – but as fitness center managers know, gym visits begin to decline as soon as the third week of January (and the spike in Google searches for "gym" at the beginning of each new year is extremely distinct). Many people have an abstract desire to work out more in general, but fewer people want to go to the gym today.

In recent years there has been increasing experimentation with the idea of paying people for making healthy choices. New provisions in the Affordable Care Act reward companies for instituting wellness programs for employees, and companies have responded with programs including financial incentives for healthy behaviors.

A growing body of public health research shows that financial incentives work wonders for promoting healthy outcomes like losing weight and quitting tobacco, but most often the effect evaporates soon after the payment periods ends. It seems that these incentives don't always do a good job of creating healthy habits that will persist once the incentive goes away. An article appearing in a recent issue of the American Economic Journal: Applied Economicsexplores a modification to the financial incentives approach that may help these health interventions stick.

In Incentives, Commitments, and Habit Formation in Exercise: Evidence from a Field Experiment with Workers at a Fortune-500 Company (PDF), authors Heather Royer, Mark Stehr, and Justin Sydnor study a wellness incentive program implemented at a large corporate headquarters office in the Midwestern U.S. Three groups of employees were given different types of financial incentives to visit the on-site fitness center, and their gym-going behavior was monitored for many months afterward.

The basic incentive was pretty typical: some employees were offered $10 per gym visit over a four week period (the most they could collect was $30 per week). At the end of that four-week period, the researchers introduced a wrinkle for some employees. That group was invited to make a two-month commitment contract to continue exercising.

How does a commitment contract work? An employee puts some of her own money at risk that she will forfeit if she does stick to her commitment (in this instance, employees were allowed to choose the amount at risk). If she can make it to the gym at least every two weeks over the next two months, she won't have to pay and will receive her full benefits for participating in the experiment. If she falters, her commitment amount is lost and donated to charity.

Why would anyone want to take up this offer, where the best possible result is breaking even? This arrangement was inspired by research on time-inconsistent preferences, a situation where long-term preferences do not align with short-term ones. Someone may decide on a Monday morning that he wants to work out three times that week, but when the time comes to go to the gym Tuesday night he suddenly finds something better to do.

Using computerized login records from the fitness center, the authors compare the gym attendance of groups with and without the commitment contract offer. The response to the initial financial incentive is stark – gym attendance spikes for the incentive groups but not the control group during the four weeks when the $10-per-visit incentive is in play – but attendance recedes considerably in the weeks after the incentive ends (see figure above).

But the authors were more interested in how the groups would differ in the long run. The authors continued to monitor the behavior of participants over the subsequent months. This attendance data was collected on each participant long after payments from the experiment had ended, at which point many participants probably thought the experiment was "over."

Nevertheless, substantial differences persisted between the groups. Even 12 or 18 months later, employees who were part of the commitment contract group had noticeably more gym visits on average, and a greater fraction of that group kept up weekly visits. Remember that only about 12% of the employees who were offered a chance to make commitment contracts actually took up the offer, making the difference between the groups all the more notable.

The link between commitment and habit formation in this context is not totally clear. But a similar commitment contract for smoking cessation that was part of a 2006 study also seemed to induce some good habits: a surprise check-in 6 months after the incentive ended showed that people with commitment contracts still had lower nicotine levels in their urine. In that case as in this one, people did not immediately revert to unhealthy habits after the commitment contracts ended.

The commitment contract approach is especially appealing for companies because it is cheap – after all, it's the employees' money is on the line, not the employer's. The voluntary nature of the arrangement also means that it can reveal a subset of employees who are interested in fostering healthy habits, which might in turn allow firms to target additional programs and incentives.

Then again, it may be the employees who don’t sign up for the contract that could most use it. The authors identify a group of employees they call "low-frequency members" – people who pay the $25/month membership fee for the on-site fitness center but rarely visit. Perhaps they would get the most benefit out of a commitment contract that forced them to make concrete steps. Nevertheless, very few members of this group actually signed up for the commitment contract when it was offered.

The authors close with a call for future research exploring what kinds of people have demand for self-commitment devices and why. This could help us better understand the secret of habit formation that eludes so many of the new customers who will flood into their local gyms over the next few weeks. ♦

"Incentives, Commitments, and Habit Formation in Exercise: Evidence from a Field Experiment with Workers at a Fortune-500 Company" appears in the July 2015 issue of the American Economic Journal: Applied Economics.