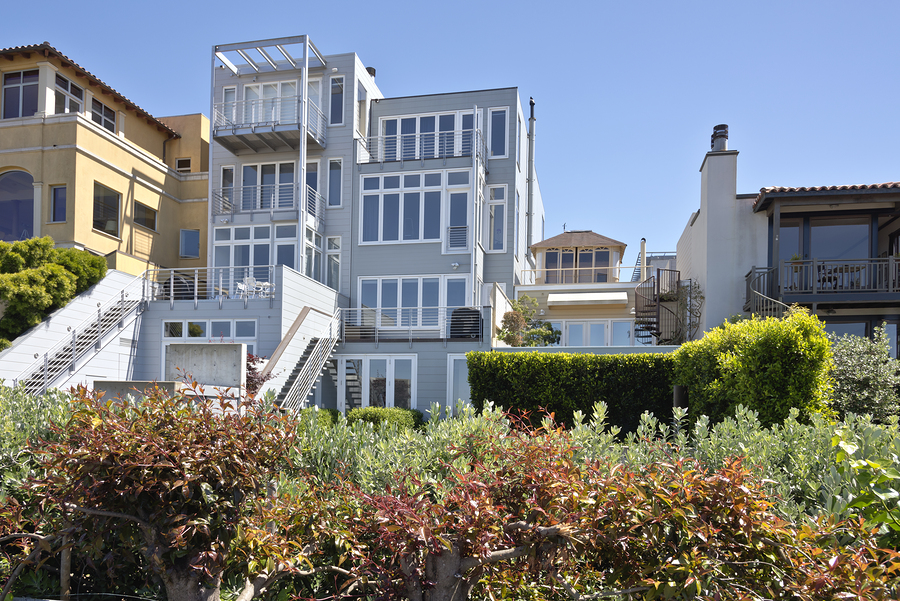 Modern houses in San Francisco, CA. Since 1978, new homes constructed in California have been required to incorporate energy-saving features.

In 1978, the state of California rolled out energy efficiency codes for new buildings that were hailed as some of the most ambitious in the world. By requiring basic upgrades like window glazing and insulation for new houses, they offered the prospect of lower cooling and heating bills, cleaner air, and less greenhouse gas emissions. Soon, states from coast to coast were adopting similar standards amid growing concerns over climate change.

The only problem? The new standards may not have actually saved much energy after all.

It’s not easy to say for sure, because it’s hard to estimate how much energy California homes would be using today if the building codes had never been introduced. But as more and more jurisdictions are relying on green building codes to reduce emissions and energy efficiency is becoming a cornerstone of U.S. climate policy, these policies deserve a more careful evaluation.

In the latest issue of the American Economic Review, Georgetown economics professor Arik Levinson takes a look at energy use data from new and old houses in California and elsewhere to see whether the codes are having the intended effect (PDF).

New homes in California (built after the codes were implemented) actually use quite a bit more electricity and a bit less natural gas than the older homes that are still around. But that’s not a fair comparison, as newer homes tend to be larger, occupied by higher-income residents, and built in less temperate parts of the state.

So how do we know if the mandated building improvements are saving energy relative to a world without such codes? Engineers can use sophisticated techniques such as model homes where robots turn appliances on and off to simulate how energy use is affected by improvements like better shading, better caulking, duct insulation, and more energy-efficient appliances.

This isn’t just an engineering question though – it’s an economics question as well. This engineering approach doesn’t consider the behavioral response of the people who actually choose to live in greener homes, and how their energy use changes as a result.

They don't make 'em like they used to
Surplus home energy usage in the face of unseasonable temperatures in California in 2003 and 2009, by year of construction. Electricity usage during hotter weather is more responsive for houses of more recent vintage. This is occuring despite mandated weatherization improvements that, in principle, reduce the need for climate control. 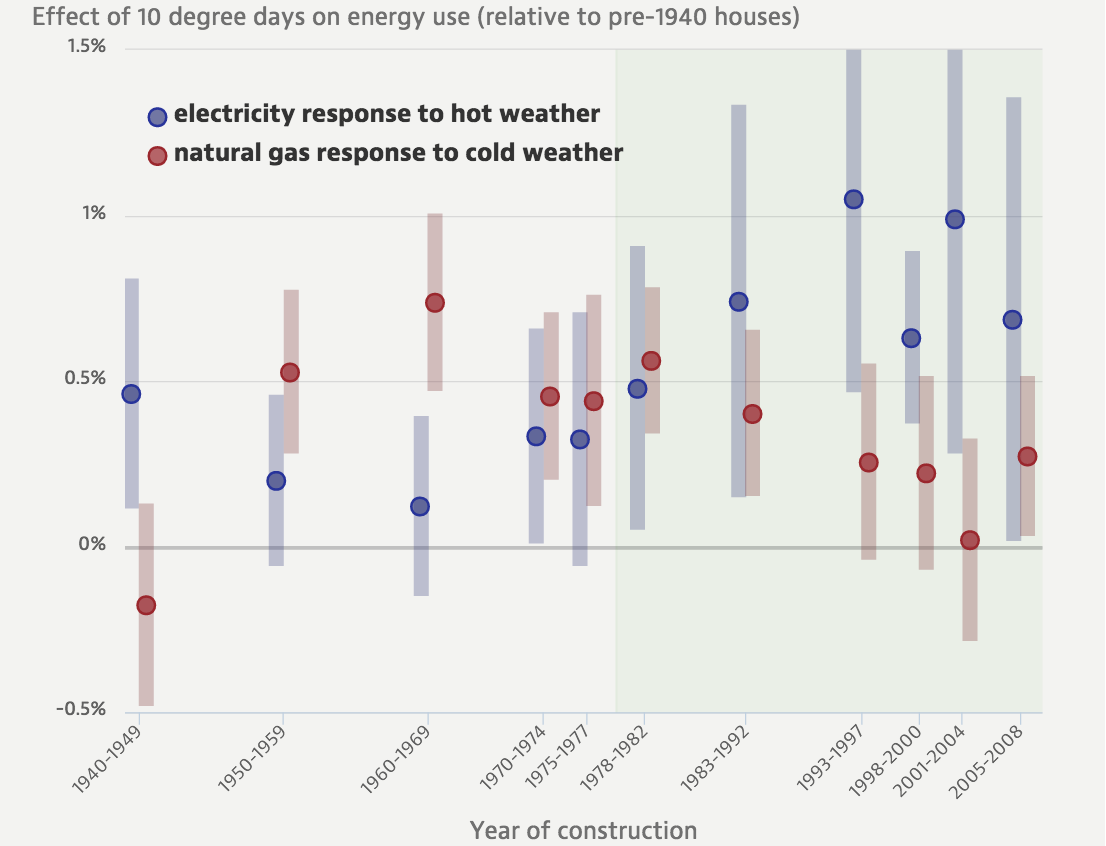 Levinson uses data from a statewide survey of energy use in thousands of California homes to try to measure the impact of the codes. The detailed survey data allows for an apples-to-apples comparison between homes of similar size, in a similar climate, with occupations of similar incomes and educational attainment – differing only in that some were built before the 1978 codes, and some built after.

Levinson finds that houses built after 1990 in California do in fact use a bit less energy (10-15% less electricity and 25% less gas) than houses built before the 1978 standards, all else equal. But this improvement for newer houses is not significantly better in California than in other states with much laxer building codes, suggesting the tough California building codes are not responsible for a large part of this shift.

Another test of whether the codes are working as intended is to see whether newer houses show smaller energy usage spikes in hot and cold weather.

Normally people will use more energy when the weather turns very warm or very cold as they attempt to maintain comfortable temperatures in their houses. The weatherization improvements included in the building standards should reduce the need to crank up the AC or the heat on uncomfortable days.

Even so, Levinson finds that electricity use responds slightly more to hot weather in new houses than old houses, although there are modest improvements for gas use on cold days (see figure above).

Why might these technological improvements fail to bring down energy use? The rebound effect may be partly to blame. In an old house with drafty windows and an inefficient cooling system, it might make more sense to sweat out a mildly hot day by opening the windows, using fans, or heading to the pool, rather than pay for sky-high electricity bills. But in a modern home with a tightly-sealed building envelope and a high-efficiency air conditioning system, occupants might not think twice about turning on the air.

The end result can be a smaller-than-expected drop in energy use, but also a lot more comfort. This means the rebound effect isn’t necessarily bad news. Energy efficiency improvements have probably allowed California families to heat and cool their houses more to their liking (or even add luxuries like backyard pools) without breaking the bank on energy costs or burdening their consciences with environmental guilt.

Energy efficiency policies like California’s are held up as a model for other states and countries and have become central to U.S. climate policy . . . More than one-third of the greenhouse gas emissions reductions targeted by Massachusetts in its Global Warming Solutions Act of 2008 were projected to come from energy efficiency improvements to buildings and appliances.

Additional research suggests that even the rebound effect might not explain some of the underperformance seen here. A study of Michigan homes that participated in a weatherization program as part of the 2009 stimulus package found that improvements did not tend to pay for themselves, even though survey data indicated the rebound effect wasn’t a big factor.

As Levinson points out, these regulations can have other benefits, like reassuring homebuyers that builders didn’t cut corners and leave them with a drafty house. But if we are relying on energy efficiency improvements to actually reduce energy usage and cut greenhouse gas emissions, there isn’t a whole lot of evidence that they are succeeding. With ongoing climate initiatives like the U.S. Clean Power Plan relying heavily on energy efficiency gains, Levinson cautions about putting too much stock in the energy-saving potential of green building codes.

How Much Energy Do Building Energy Codes Save? Evidence from California Houses appears in the October 2016 issue of the American Economic Review.