The efficiency of outsourcing

Does the government save by hiring private contractors for publicly funded projects? 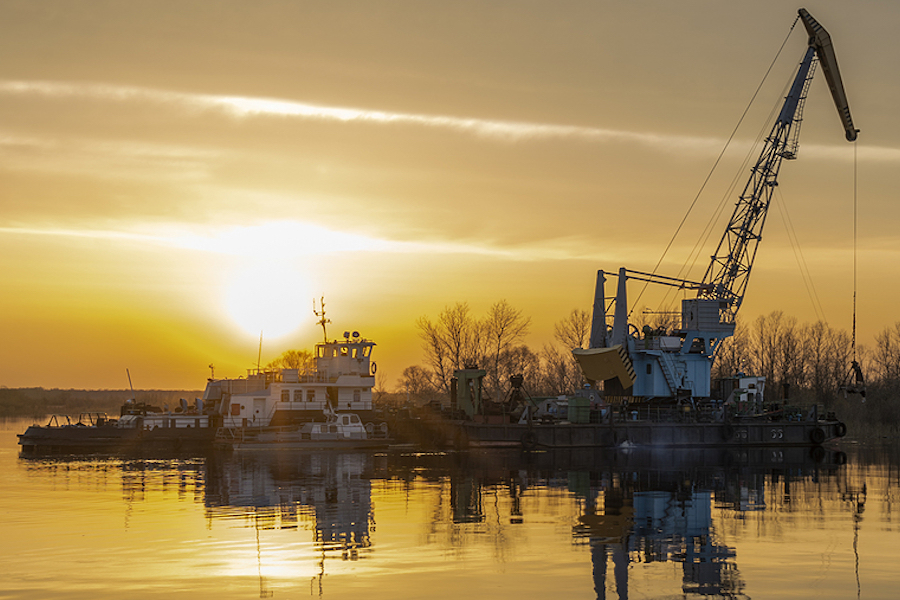 Dredger is working to deepen the fairway on a river.

The United States spends hundreds of billions of dollars every year in contracts with industries ranging from healthcare to public infrastructure, the rationale being that private firms are better able to provide certain services efficiently.

And yet, it’s difficult to know for sure whether the government is actually saving money by outsourcing.

There's sort of this allure of competition combined with private enterprise potentially being more efficient, that there's less bureaucracy. This paper is really investigating and probing whether it's not the case.

Every year, the United States Army Corps of Engineers (USACE) solicits bids from private dredging companies to clear out debris and muck from waterways in order to make them passable. But the USACE has its own fleet of dredges too.

There's sort of this allure of competition combined with private enterprise potentially being more efficient, that there's less bureaucracy,” Barkley told the AEA in an interview. “This paper is really investigating and probing whether it's not the case.”

Barkley was curious about which types of projects were best handled by the USACE directlyand whether there were ways to tweak the procurement auction process so that the government would truly be getting the most for its money when it did opt to outsource.

He collected data on all dredging projects that were outsourced between 1999 and 2013 and then developed a model to estimate cost advantages of the government versus private companies, factoring in the operational efficiency advantages, as well as how competition between private firms bidding against each other could lower project costs.

Dredging Costs
The chart below shows the costs incurred to the US Army Corps of Engineers for dredging projects. The majority of the spending was on outsourced projects to private contractors.
Source: USACE

Overall, Barkley found that outsourcing led to substantial savings for the government. Private costs were 23 percent lower than if the USACE had performed the work in-house.

But the advantages of outsourcing largely depend on the size of the job, Barkley said. Private dredging companies are more efficient for large jobs, which tend to be more competitive, driving down bid prices. In addition, private companies have more flexibility to adjust staff to meet the labor needs of a project.

Still, the government fleets have an important role for smaller projects, where there are not enough competing firms to keep bids low.

The government could leverage its in-house capability to set a kind of price ceiling on project bids. Currently, the USACE estimates projects by looking at engineering costs and historical contracting data. Barkley wondered whether it would be better to set a “reserve price” based on what it would cost the government to do the job in-house. That would ensure that the project goes to the supplier with the lowest cost, whether that’s the government or a private company.

Barkley ran a policy experiment to test this approach and found that it lowered total expenditures by 15.7 percent.

The findings have broader implications beyond the dredging industry. There are opportunities for savings in health care, education, and other markets where the government outsources to the private sector while also maintaining a competitive presence.

“I think the primary takeaway is being creative about designing market mechanisms that fully utilize the government's presence in the market,” Barkley said.

“Cost and Efficiency in Government Outsourcing: Evidence from the Dredging Industry” appears in the November 2021 issue of the American Economic Journal: Microeconomics.

Reforms in funding for New York City’s public schools had consequences for the private school sector.

Reforms to African agriculture markets didn’t help farmers or consumers as intended. The reason seems to be with how intermediary traders set prices.