Does economic activity move away from flood-prone areas after catastrophe strikes? 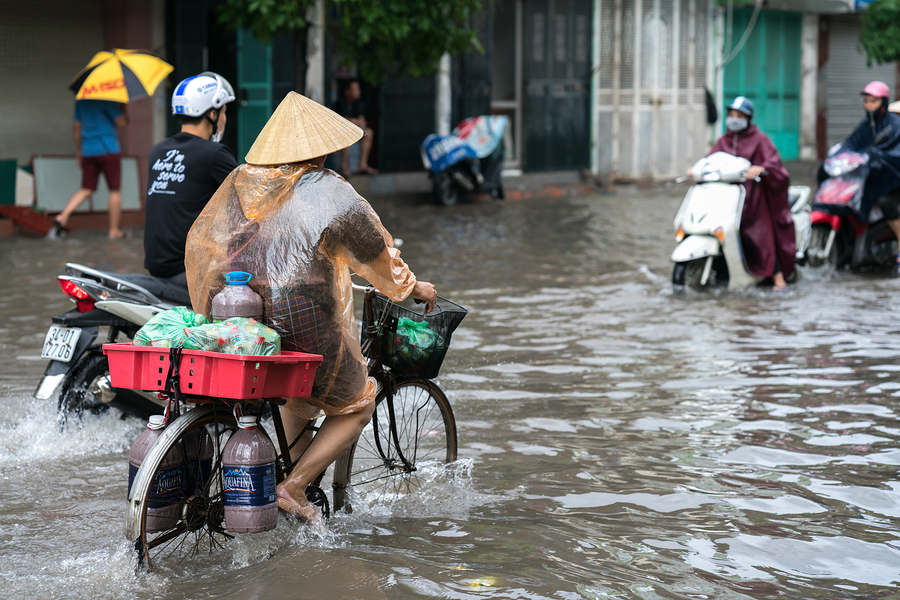 The residents of Hanoi move through flooded streets on July 17, 2017.

In August of 2005, Hurricane Katrina slammed into New Orleans. Nearly 80 percent of the city was submerged after multiple levee failures. Thousands of people were driven from their homes, and billions of dollars of economic damage were left behind.

And yet, a week after the storm, one building broadcast the city's resilience to the world. The words “The Big Easy will rise again” were written out in huge block letters on its rooftop.

Fifteen years later, New Orleans has come a long way to making good on that promise.

Since Katrina, each year dozens of low-lying cities across the globe have repeated this cycle of destruction and renewal. And it doesn’t look like that will change anytime soon, according to a paper in the April issue of the American Economic Journal: Applied Economics.

Authors Adriana Kocornik-Mina, Thomas McDermott, Guy Michaels, and Ferdinand Rauch found that flood-prone areas in cities tend to be economic hotspots, and they don’t lose that status even after catastrophe strikes. Businesses and residents generally returned to the city's most vibrant neighborhoods.

If systems were more flexible then increased flooding would be less of an issue because the system would adapt. But if it shows itself to be rigid, then the costs from climate change could become really magnified.

The worldwide scale of the hardship that flooding causes is staggering.

“From 1985 to 2014, floods displaced more than 650 million people,” Rauch told the AEA in an interview. “We wanted to document these important numbers, which we thought were not studied enough in economics.”

In contrast to New Orleans, most of these events happened in developing nations, and not necessarily on coastlines. Heavy rains often cause severe flooding in major population centers along rivers, such as the Ganges in India and the Yangtze in China.

The authors wanted to know how much the biggest floods—ones that displaced more than a hundred thousand people—have moved economic activity within cities. To do that they put together data from the Dartmouth Flood Observatory archives.

Measuring the amount of economic activity inside cities was trickier though.

Government statistics are not typically gathered frequently enough or provided at a local enough level to see differences within cities over a year, especially in developing countries. So, the authors used satellite imagery that tracks nighttime lighting. This light intensity correlates strongly with economic activity.

Light intensity dropped significantly the year cities were hit, between 2 and 8 percent. But those lights were almost fully recovered by the next year, even in low-elevation areas.

“There are some places in Southeast Asia that get flooded every two or three years and they just rebuild again,” Rauch said. “That's surprising because the costs of rebuilding a flooded city are just enormous.”

An aerial view of the Big Easy's comeback
The red and pink dots in Panel A of the chart below shows which areas of New Orleans were flooded by Katrina in 2005. Panels B, C, and D show the average annual light intensity in 2004, 2005, and 2006, respectively. Light intensity becomes dimmer in 2005, especially in the east, but almost fully recovers by the next year. Lights are not a perfect proxy, though. They may understate the amount of destruction. For instance, new construction immediately after an event could make it look like economic activity hasn’t dropped as much as it really has.

More importantly, light intensity ignores many of the costs of floods—such as rebuilding infrastructure, the extra health risks associated with flooded environments, missed schooling, and deaths.

It’s understandable that families don’t want to move from flood-prone areas. They may have lived there for generations and invested a lot into a home. But it’s also possible that people don’t understand the risks of flooding.

The authors found evidence that both incentives play a role in some parts of cities.

They saw that areas without lighting in the first year of data—presumably because they were not inhabited at the time—didn’t fully recover if they got hit in later years when they did have lighting. This suggests that the new residents may have underestimated the risk of flooding and left when they understood.

Similarly, poorly lit areas didn’t completely recover after a flood either. The researchers interpreted this as a sign that people from poorer areas were more willing to move since they had fewer sunk costs to leave behind.

As more people move into cities and concerns grow about rising sea levels, it could become critical for city planners to encourage growth in areas less susceptible to flooding. The authors’ work shows that people and economic activity rarely move on their own.

“If systems were more flexible then increased flooding would be less of an issue because the system would adapt,” Rauch said. “But if it shows itself to be rigid, then the costs from climate change could become really magnified.”