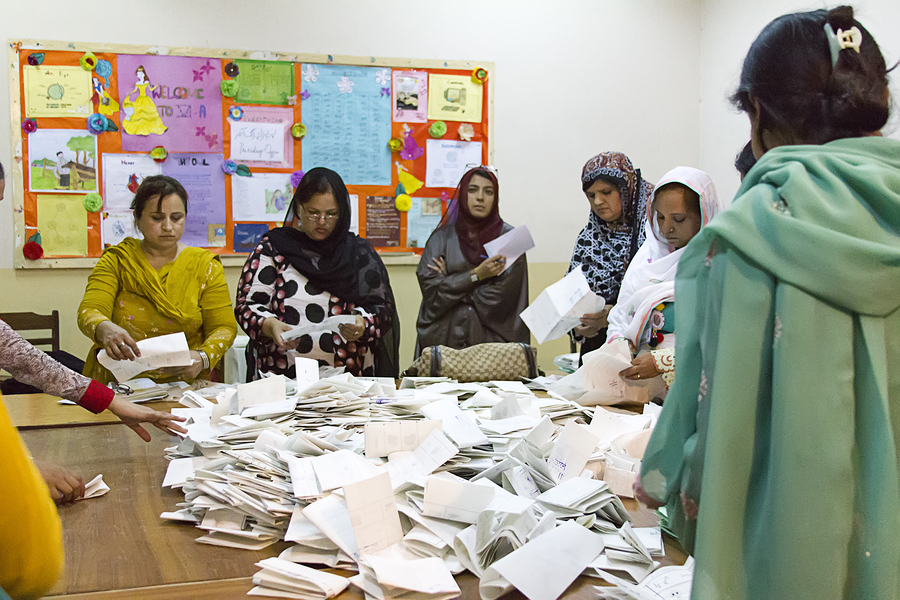 Vote counting in Lahore, Pakistan during the 2013 general elections

Get Out The Vote campaigns are a staple of the voting process in developed countries, particularly in the United States. These campaigns motivate potential voters to register and vote on election day, and researchers have studied them extensively.

However, in developing countries, motivation is not always the obstacle to voting. Groups excluded from the public sphere, such as women, face different challenges. Whether safety concerns, cultural traditions, or mobility constraints, these obstacles have received less attention from economists.

In the January issue of the American Economic Journal: Applied Economics, a new paper by Xavier Giné and Ghazala Mansuri highlights the role of information in female voting behavior in Pakistan. We spoke with Mansuri about what happened when researchers gave women basic information on the voting process and the secrecy of their ballots.

We also talked about women’s social networks, what men knew about women’s votes, and how cost-effective the information campaign was.

A transcript edited for length and clarity follows, and you can listen to the full interview by clicking on the media player below.

AEA: First of all, thank you for taking the time to talk today. You recently wrote a paper called Together We Will: Experimental Evidence on Female Voting Behavior in Pakistan. To get started, I was wondering if you could tell us a little bit about what is behind the first part of that title, "Together We Will.”

Mansuri: It was about including women in the conversation and bringing women into the public space. Electoral participation — whether as candidates or as citizens — is very much a part of that.

AEA: You're looking specifically at Pakistan and how women vote there and engage with the political process. Could you give us a short background on Pakistan's voting system and how women have historically participated in it?

Mansuri: Pakistan is a parliamentary democracy by design, but the actual democratic process has been interrupted several times by short and long periods of military rule following coups of various types. It's been a choppy road to democracy, but in recent years there have been almost ten years of continuous democratic rule with a non-violent transition in between to a new government, so there are some encouraging signs.

AEA: And why do women turn out at such low rates?

Mansuri: There could be multiple reasons for this. One of them is that there may be cultural stereotypes or traditions that make women self-exclude because they think this is not a process that is salient for them.

Some of these reasons are not reasons that can be changed overnight. There are in fact mobility constraints. If there are social mores and other things that restrict women's participation, those may be a little harder to shift. But, to the extent that any of these is about a lack of information — either on the process or the salience  — then that may be addressed quite quickly by providing the right type of information. That's our focus. 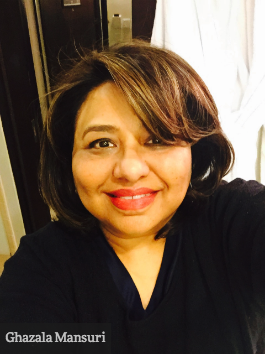 AEA: Could you talk about exactly how you tested whether or not this information would actually change things for women and how they decided to vote?

Mansuri: This was a randomized experiment, and it had two arms. The first arm provided women information just on the importance of participating. Why should they participate as voters in this process? And then the second part was additional, so it did everything that part one did — which is provided information on the salience of the process and importance of voting — but also provided details on exactly what would happen on election day: where their polling station would be, the fact that polling booths were single-gender, that they were manned by women political staff, what hours it would be open, that it was close by, and so forth.

AEA: Going into this experiment, was there anything you expected to happen?

Mansuri: I think our hunch was that that there may be some impact [in turnout], but we didn't put any size on it...We were interested in also understanding the nature of women's networks. Women with limited mobility tend to have networks that are very close to home. How much peer to peer diffusion of this information would occur?

On both fronts, the results are actually quite surprising for us because the spillover effects were huge. Women were talking to other women around them more than we had expected. As a result, the total turnout impact is large enough that it would close the gender gap in turnout if this had been implemented on scale.

You don't have to target every household in going door to door. You can be quite parsimonious and still get the message across.

AEA: You went back after the experiment and talked to the men and women in each household, and you found that the men generally had less of an accurate idea about who their wives were voting for. Could you elaborate on that?

Mansuri: The idea was to tell [the women] a little bit about the fact that the ballot is secret. This is information that's between you and the piece of paper. No one else really has to know it or knows it. It's up to you whether you tell them or you don't. And what we find is that that ballot secrecy message appears to have gotten through. So men just knew less, and the women who are treated actually vote for a different candidate than the household had voted for.

Mansuri: Yes. This is a very very cheap way to get to women. In the end, these are very simple poster campaigns in a low-literacy, low-mobility environment.

The other thing we do learn which makes this even more effective is how much information spillover occured. You don't have to target every household in going door to door. You can be quite parsimonious and still get the message across. For Pakistan, I see this having a major impact. In any context, for women or other excluded groups, if you see differential turnout, then at least providing accurate information on the real and imagined constraints of participation could be important.

Together We Will: Experimental Evidence on Female Voting Behavior in Pakistan appears in the January issue of the American Economic Journal: Applied Economics.

Swarthmore’s Amanda Bayer discusses sexism in the profession and what to do about it.