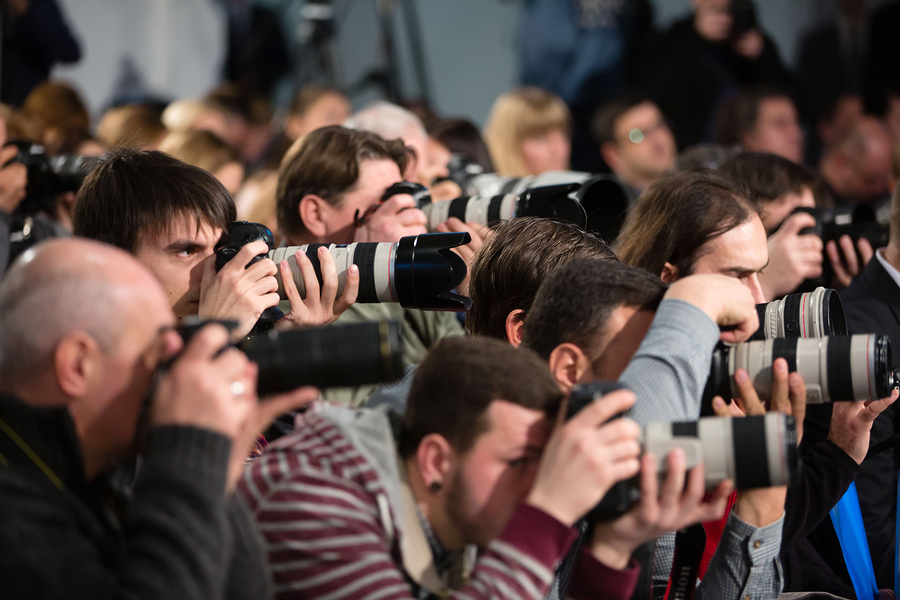 Journalists at a press conference for Ukrainian President Petro Poroshenko in Kiev, January 14, 2016.

As the 2016 U.S. presidential election continues to dominate the news, accusations of media bias are surfacing just as they do every four years. Of course, the media are in the tank for establishment candidates who support the status quo – unless they are propping up the underdog in the hopes of a competitive race (and high ratings).

These mutually contradictory critiques often start from the assumption that media have their own preferences or interests and are trying to boost favored candidates for a credulous audience. But does this really matter in a material way at a time when trust in the media is declining and people increasingly seek out news coverage that confirms their own biases anyway?

From the perspective of voters, the crucial question is whether media bias (if it exists) is actually distorting the choices of voters and politicians. Does the media’s influence result in different people getting elected and different policies getting put into practice? A study from the current issue of the American Economic Journal: Microeconomics uses a game-theoretical model of electoral competition to study the potential effects of media influence.

In Character Endorsements and Electoral Competition (PDF), authors Archishman Chakraborty and Parikshit Ghosh ask whether and how media bias could affect the outcome of elections. They model an election as an economic game between candidates, voters, and the media and they show that, under the right conditions, the public might be better off if the media just disappeared.

The authors start by assuming that people care about two distinct things in their elected leaders: their policy positions and their character. In the model, the media and the public at large agree totally on issues of character: candidates should be honest, fair, intelligent, and should never be tempted by corruption or graft. But, crucially, the media and public disagree on issues of policy.

This disconnect means the media might disagree with the public about who is the best candidate in a given election. This disagreement could be interpreted as a simple ideological bias to the left or right, or represent the gulf between the opinions of everyday voters and the consensus of elites who tend to own or dominate the media companies.

The figure above shows selected results from a survey of elites and the general public in the U.S. conducted by the Chicago Council on Foreign Relations. There is a definite difference of opinion – the public is much more skeptical of globalism, open borders, immigration, and U.S. military operations while the elites (a group that includes academics, think tank experts, and journalists covering international affairs) are much more comfortable. If the media are largely owned and operated by an elite class who holds these idiosyncratic opinions, biased coverage could result.

So media outlets might be expected to give more coverage to issues they care about, and put candidates who share their outlook in a more favorable light. But does this really affect election outcomes?

So media bias might be a non-issue if viewers are able to unskew the coverage. The problem, in the authors’ model anyway, is that the media has crucial information that the voters don’t have.

In the election imagined by the authors, the media’s job is to research each candidate’s background and record. So while everyone knows the candidates’ policy positions, only the media have good information about a candidate’s character. This makes sense because individual citizens do not have time to personally investigate the background of candidates or try to uncover scandals themselves. Instead, they delegate this responsibility to the media.

But the media might not have incentives to paint a totally honest picture for their audience, because they may have their own opinions about whose policies are better. In a race between a candidate who panders to public opinion and one who espouses the elite worldview, the media will probably want to promote the latter candidate unless it learns something truly odious about his or her character. The media (like the public) wants to avoid people with bad character, so if they discover their preferred candidate is bad they may grudgingly choose to promote the other candidate instead.

This creates an interesting tension between knowledge and authority -- the media has the information about the candidates’ character, but the voters are the ones who decide which candidate will hold office. This gives the media influence, even if voters are fully and completely aware of the media’s bias. If the voters in the model value character highly relative to policy, and as long as the media’s bias isn’t too extreme, they will listen to the media’s endorsement even if they know the media shouldn’t be trusted to always report in their best interest.

Parties face a tension between opposing temptations of pandering to the voter and courting the media. Adopting slightly more elitist policies than the rival induces a slightly higher probability of endorsement and electoral victory – a phenomenon we call elitism creep.

This in turn means that politicians have some incentive to get on the media’s good side. Candidates are torn between pandering to voters’ interests and currying favor with the elite in hopes that the media will prefer them. The public will interpret favorable coverage as a good sign about that candidate’s character, although often the media may be favoring a candidate simply because of his or her policies. The public has no way to tell if the media is sincere about a candidate, but the endorsement still carries weight because the media does have more information than the voters.

In the end, electoral outcomes will tilt toward elite interests, both because candidates have incentive to shift their platforms in ways that please media elites, and because the media will tend to boost the candidate closest to their preferences (as long as it doesn’t discover terrible skeletons in that candidate’s closet). If one candidate goes too far in pandering to elites, another candidate might try to take advantage by renouncing elites and taking on the voter's preferred policies in what the authors call a "flight to populism." This candidate will likely be skewered in the media regardless of his character because of his anti-elitist positions, but voters might respond positively to an exotic candidate who is not espousing the typical elite positions.

The authors show that, if the media influence is shifting political debate too much, the voters in their model would actually be better off if the media ceased to exist. In that world, voters would be more easily hoodwinked by candidates who lack integrity (because no one would be digging into their pasts to uncover character flaws), but on the plus side there would be no incentive for candidates to deviate from the policies favored by the masses.

Of course, the dynamic between voters and the media in real world elections is much more complicated. Recent research has highlighted the way that people are selective about the media they consume, and sometimes it may be hard for media consumers to even perceive bias in the first place. In an age when many people across the demographic spectrum get their news from social media feeds rather than a particular TV channel or a city newspaper, there are fears that Facebook’s decisions about what news to show users could subtly change opinions, or that tweaks to Google’s search algorithm could move enough voters to affect an election.

So while the authors’ model is just a starting point for understanding the problem of a media with its own political agenda, it highlights the key problem for voters in a democracy: the media have better information about the candidates’ qualifications, but they don’t necessarily have good incentives to report this information truthfully. Voters have to decide whether media reports are trustworthy enough when they cast their votes. ♦

“Character Endorsements and Electoral Competition” appears in the May 2016 issue of the American Economic Journal: Microeconomics.