An evaluation of the National Resident Matching Program 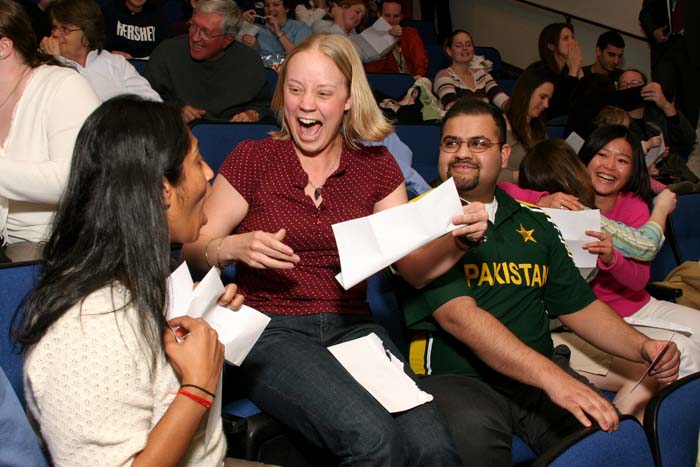 Students at Penn State College of Medicine rejoice after learning where they matched for their residency programs on Match Day in 2010.

On Friday, tens of thousands of graduating medical students across the U.S. will gather in auditoriums and learn where they are headed for residency in one simultaneous announcement that is the physician's equivalent of the NFL draft. This is the National Resident Matching Program, or "The Match", and it has a long history in the medical profession.

Most labor markets are decentralized, with employers and job seekers haphazardly contacting each other, evaluating each other, and negotiating offers of employment – but the labor market for medical residents is no ordinary market. Fourth-year medical students angling for residency slots fill out ordered preference forms that are entered into an algorithm that assigns all students to available residency slots on a day in March each year.

This unusual system arose in the early 1950s when it became apparent that the old, decentralized system was no longer working. In the 1940s, this market worked much as any other, with individual residency programs reaching out to medical students with offers for placement after they graduated. To get a step up on their rivals, programs began trying to lock in students earlier and earlier, which led to a vicious cycle as programs realized they might run out of qualified students (in the relatively small market for medical residents of a given specialty this was a real concern). Soon, students were interviewing and accepting exploding offers in their third or even second year of medical school.

This didn’t work well for anyone. It forced programs to commit to students before they had proven themselves in the classroom, and it forced students to settle for programs they didn’t really want out of fear that all the good spots would be snatched up.

The match was introduced to take time pressure out of the equation. Students would rank their top schools and programs would rank their preferred students, and an algorithm would make a match between them and release the results at a predetermined time in the spring before students were set to graduate. Programs and students who participate agree not to make or take offers outside the system in order to keep the market from unravelling again.

This system has been touted as an early triumph of economic engineering but has also been called into question and even provoked a 2002 class-action lawsuit alleging that the match system depresses resident salaries. The typical resident salary is less than $50,000 per year, far less than physician assistants or nurse practitioners who have roughly similar skills sets. Salaries are set long in advance, and once a student is matched to a residency program, she has no ability to negotiate because she is committed.

The match system clearly has some benefits in keeping the market from descending into chaos, but does it also serve to hold down the salaries of medical residents? An article appearing in the American Economic Review uses a new empirical approach to answer this question based on results from the family medicine residency match.

In An Empirical Model of the Medical Match (PDF), author Nikhil Agarwal argues that the match is not the only reason that resident salaries may not be commensurate with residents' talents and training. Because it is very difficult for new residency programs to get up and running, and because it takes new programs so long to become established, existing residency programs have an advantage that gives them more bargaining power.

If a residency program is one of the most prestigious in the country, has some of the most sought-after doctors to train with, or is one of the few positioned in a city or state where many residents want to live, it can effectively charge residents "tuition" in the form of a lower salary. Agarwal builds a model of the medical match to try to measure the size of this implicit tuition across programs and see if it is large enough to explain the low salaries of residents.

"In the lawsuit, the plaintiffs used a perfect competition model to argue that residents' salaries are lower than those paid to substitute health professionals because the match eliminates salary bargaining. This reasoning does not account for the effects of the limited supply of each type of program and resident."

Agarwal's model makes the simplifying assumption that while student preferences can differ based on personal considerations like wanting to be matched close to family or preference for living in a big city, each program's preferences are identical: every residency program in the country agrees that a certain student is the best in her year, and they agree on the rank ordering of every other student too.

The challenge in studying this market is that researchers can only see the final matches. Due to privacy protections, we can't see the complete ranking lists of residents or see who really wanted to end up where. This would be valuable information in gauging how much prospective residents value things like salary, prestige, and geographic proximity of programs, but it’s not available to researchers.

It may seem difficult or impossible to recover much from the static information on who ended up where at the end of the match process, but Agarwal takes eight years of data from the match for family medicine doctors and looks for two kinds of subtle patterns in the final matches to try to reconstruct preferences.

First, Agarwal looks at how residents matched to the same program compare to each other. Residents matched to one program should all have roughly similar ability, so the differences between them are illuminating. If some students are strong on one dimension and weak on another compared to others in the same program, it illustrates how programs view the tradeoff between different types of qualifications.

Once the preferences of residency programs are better understood, Agarwal then looks for patterns of assortative matching in the data. Do the students from the most prestigious med schools all end up at the largest hospitals, while the students from the least prestigious med schools are at small hospitals? That would be a strong indication that hospital size is an attractive quality for students and that the residency programs at big hospitals essentially have their pick of applicants.

Agarwal takes his dataset containing roughly 24,000 matches for family medicine residents from 2004-2011, and looks for these patterns to train his model. He finds that these students prefer prestigious, well-funded programs, rural hospitals to urban hospitals, and a wider mix of cases as measured by Medicare diagnosis data. He also finds that residents who match to hospitals that are geographically close to their birthplaces or medical schools tend to match with less prestigious and lower-salaried programs – an indication that students are willing to trade off prestige and money in order to be close to family, friends, or a significant other.

Meanwhile, programs seem to value students who come from schools with high average MCAT scores and research funding from NIH, but don't care about a student's gender or country of birth.

Medical residents get paid partly in experience
The distribution of nominal salary (red) and nominal salary plus estimated implicit tuition for residents (gray) at more than 400 U.S. family medicine programs in 2010. When non-salary benefits – like the opportunity to train at a more prestigious program or one closer to home – are considered, total resident compensation begins to look more comparable to the salaries of physician assistants or nurse practitioners.
Source: author calculations based on specification 2 in Table 8 of Agarwal (2015)

Crucially, the salary offered at each program is one of the factors that Agarwal can observe, so he can see how students trade off money specifically against other desirable traits like prestige, geography, or an interesting medical case mix. This allows him to estimate the monetary value associated with relative tradeoffs; for instance, he finds that the average resident is willing to take a $10,000 annual pay cut to match at a program in her state of birth or the state where she went to school versus a similar-quality program far away.

From these results, Agarwal estimates an implicit tuition for each program – a measure of how much extra value programs offer to residents due to their specific factors like prestige or geographic placement. Higher implicit tuition is an indication of bargaining power because it results when programs have highly desirable characteristics that aren't widely available. These attractors allows programs to keep their salaries low for reasons that have nothing to do with the existence of the match system.

The sum of the nominal salary and the implicit tuition is an better indicator of the true compensation that a resident is receiving when she enters her program – she is being "paid" not only her actual salary but also in the form of experience training at a top program or the covenience of being close to loved ones. the figure above shows that the distribution of this measure (gray) is much higher than the nominal salaries (red) that most residents receive, and quite high – more than $140,000/year – at some of the most coveted residency programs.

Residents are apparently willing to sacrifice higher salaries earlier in their careers either because they are willing to take less pay to be near family or because better training could result in a more satisfying career (and maybe a more lucrative posting) down the road. Agarwal can't definitively say that the match process isn't reducing salaries, but his findings suggests that, even in the absence of the match, residents would be willing to take low salaries to sign on at the right programs.

The medical match controversy may only affect a tiny sliver of the labor market, but matching markets are growing in importance as policymakers are increasingly turning to matching to solve thorny problems in ill-functioning markets ranging from organ donation to public school choice. This empirical approach to data from a match process is novel in the field of market design, which has mostly been a theoretical study so far, and provides a step forward in understanding the outcomes of matching markets. ♦

"An Empirical Model of the Medical match" appears in the July 2015 issue of the American Economic Review.