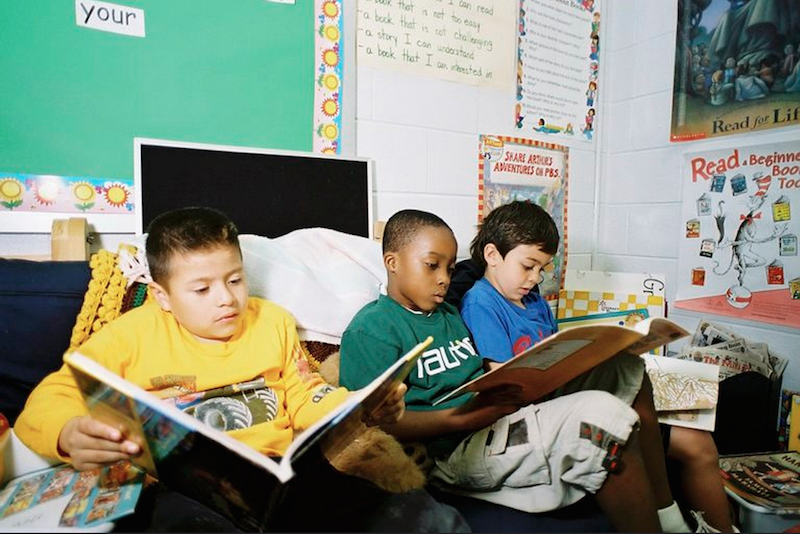 A reading lesson in a Washington, D.C. classroom in 2013. Bilingual education for immigrant students is a contentious issue in education circles.

Students at Theodore Potter elementary school in Indianapolis take math and science class in Spanish – even though about half of the student body are native English speakers. Theodore Potter is one of a small number of dual-language immersion programs operating in Indiana public schools, and the state is allocating funds for more pilot schools due to open in 2016. Proponents argue that bilingual education can boost test scores for all, but detractors argue that English-only instruction is the best way to prepare young immigrant children for their lives in America. Even as Indiana is expanding bilingual education, many states are holding firm with English-only education policies.

This same policy fight has played out before. In the years after World War I, the foreign-born population in the U.S. was actually larger in percentage terms than it is today, thanks to waves of immigration from southern and eastern Europe in the preceding decades. Politicians of the day advocated English-only schooling as a means to break immigrants’ ties of loyalty to their old countries and to prevent foreign notions like Bolshevism from taking hold in the United States.

English-only instruction laws, which required children to attend English-language schools and sometimes effectively outlawed foreign-language private and parochial schools, were passed in dozens of states in the 1910s and '20s. An article from last month's issue of theAmerican Economic Journal: Economic Policy analyzes the long-run impact of these laws.

In Did the Americanization Movement Succeed? An Evaluation of the Effect of English-Only and Compulsory Schooling Laws on Immigrants (PDF), authors Adriana Lleras-Muney and Allison Shertzer find that English-only education laws had little to no effect on immigrant students' later-life outcomes. Despite the hopes of reformers that these laws would bind immigrants more closely to the U.S., the authors find no convincing evidence that children exposed to English-only education were more likely to become citizens, enter the workforce, or serve in the military.

English-only education in the 1920s had little effect
The estimated effect of English-only education laws on immigrants' economic outcomes, in percentage points, along with 95% confidence intervals. In each case, the effect was not statistically distinguishable from zero.
Source: Adapted from Table 3 and Table 7 of Lleras-Muney and Shertzer (2015)

Of course, the timing of state laws might be correlated with relevant factors – perhaps a state that with a rapidly growing immigrant population is particularly likely to implement an English-only law. If so, a straightforward comparison of immigrants in states with and without such laws would not tell us the causal impact of the laws. The authors include a number of state characteristics like immigrant population, religious makeup, and political leanings in their model to address this concern. Any residual differences in the timing of state laws that cannot be explained by these factors can probably be chalked up to random chance.

The authors analyze the 1940 census as well as WWII enlistment records, looking for data on foreign-born males who would have been students in the U.S. during the 1920s and 1930s. By comparing immigrants born in different years and living in different states, the authors can get an estimate of how exposure to English-only laws affected eventual outcomes like employment and naturalization. The authors focus on each child's exposure to English-only laws, rather than time actually spent in English-language schools, because they lack data on where students were enrolled, and enforcement of these laws was not perfect.

These sources don't include any measures of loyalty to the U.S. or understanding of American customs, so they can't tell us directly whether these measures succeeded in inculcating American culture. But the data show that immigrants who had been exposed to more years of English-only education as children were not significantly more likely to be employed, to have become U.S. citizens, or to have joined the American military. These outcomes seem like good proxies for integration, and they were basically unmoved by English-only requirements.

The share of students learning any foreign language declined very rapidly in the 1910s, at the same rate in states with and without English-only laws....[This] suggests that other trends were driving the decline in the use of foreign languages everywhere and is consistent with a very small effect of the language laws. Historical evidence supports this view: there were many voluntary changes that resulted in greater use of English in schools.

Why did English-only instruction fail in its objective? The authors provide additional evidence that English education actually had very little impact on English fluency or literacy among immigrant children at the time. Data from earlier censuses shows that foreign-born children aged 10-16 were no more likely to be fluent in English and no more or less likely to be literate in any language when exposed to English-only laws. While the laws did modestly boost literacy for certain vulnerable groups like those with non-fluent or illiterate parents, those gains had disappeared by 1940 as immigrant students without English-only laws caught up over time.

The implications of this study for the current English-only debate are not clear. The profile of U.S. immigration continues to change as newcomers are increasingly likely to hail from Asia or Africa and to move beyond the major industrial centers like New York and Chicago that housed most immigrants a hundred years ago. This could change the value of English-only instruction in unpredictable ways. We will have to wait for future research to shed more light on whether today’s version of English-only education is more effective than past efforts. ♦

"Did the Americanization Movement Succeed? An Evaluation of the Effect of English-Only and Compulsory Schooling Laws on Immigrants" appears in the August 2015 issue of the American Economic Journal: Economic Policy.