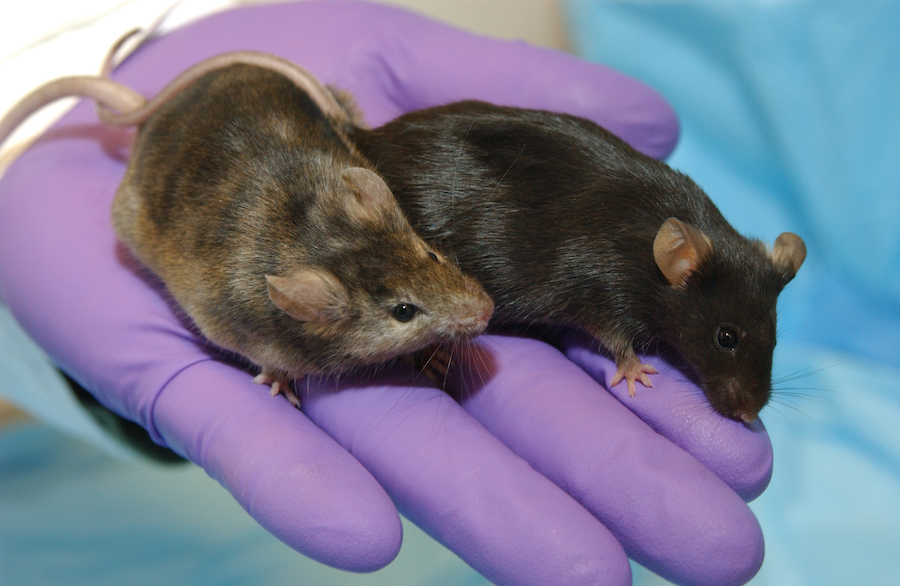 Two laboratory mice at the National Institutes of Health. Researchers genetically engineered the mouse on the left by deactivating a gene for hair growth, leaving it with a less lustrous coat than its labmate.

The biomedical research community is engaging in a lively conversation about the importance of scientific openness in the wake of a controversial editorial published in theNew England Journal of Medicine that highlighted reasons why scientists are sometimes reluctant to share their data. The ensuing debate is shining a light on the complicated dynamics that exist between medical researchers and could complicate the Obama administration's new push for a cancer cure.

This debate comes at a time when biomedical researchers face increasing barriers to accessing not just data but other research tools as well. The kinds of knowledge and tools that were once in the public domain and available to academic researchers are increasingly covered by patents and are costly or impossible for researchers to access.

Finding the right level of protection for intellectual property is always a delicate balance. Protections that are very strong can choke off potential follow-on research that could take an old idea and improve it. But when protections are weakened, there is reduced incentive for coming up with new ideas in the first place because it is harder for innovators to profit from their inventions.

The debate about patents has generally been grounded in this view of research as a sequential process, with each idea neatly building upon the last. But in reality, it is not always apparent which idea should come next; there is often an exploratory process by which old discoveries get applied in new fields to produce new innovations.

In academia, especially, there is the opportunity to explore broadly without strong pressure to find a commercially viable product. Strong patent protections may have an additional underappreciated cost if they discourage researchers from taking old ideas in unexpected directions. An article appearing in this month's issue of the American Economic Journal: Economic Policy analyzes academic work on genetically engineered mice to study this effect.

In Of Mice and Academics: Examining the Effect of Openness on Innovation (PDF), authorsFiona Murray, Philippe Aghion, Mathias Dewatripont, Julian Kolev, and Scott Stern take advantage of a shift in policy that tore down an intellectual property barrier. In 1998 and 1999, the National Institutes of Health (NIH) signed a Memoranda of Understanding with DuPont regarding the use of genetic engineering methods that were covered by DuPont patents.

The NIH agreement dramatically reduced costs for researchers who wanted to use the genetic engineering methods developed at DuPont and study mice that had been created with them. Researchers who once had to secure costly licenses and report back to DuPont annually about their research progress now simply had to fill out a one-page form and pay a small fee to cover the costs of acquiring a Cre-lox or Onco mouse.

In an 'open' research environment, researchers have low-cost and independent access to prior discoveries and research tools. Such an environment encourages not only direct (perhaps commercially oriented) exploitation by follow-on researchers, but also the exploration of new research directions and entry by researchers who are new to an emerging research area.

Costly access or royalty charges will deter academics who just want to experiment with something new and untested or try to apply an idea from another field. If a researcher already has access to engineered mice and has produced good research, she can continue to do so, but will tend to keep researching in a narrow area of expertise. A new lab that might want to use genetically engineered mice to test an off-the-wall idea would balk at paying a high upfront cost for an experiment that may not lead anywhere. Costly access will bias research toward ideas and techniques that have already been proven.

Specifically, the authors measure the influence of each article by looking to the bibliometric record. When each genetically engineered mouse strain is created, researchers will publish a paper describing its creation and characteristics in a biomedical research journal. When subsequent researchers use that same mouse strain, it is customary for them to cite that original article in their new study.

In this way, the list of citations to an original article serves as a record of the research productivity attributable to that mouse. The authors are able to link 2,171 individual genetically engineered mice to academic articles published between 1987 and 1998.

The PubMed database maintained by NIH has information on citations between articles in the biomedical literature, so the authors can follow the lines of new research citing back to each original mouse creation article. With information on authors, their institutions, and topic keywords, the authors can track not only the volume of new research relying on each mouse, but also the composition and diversity of that research.

The authors find that citation patterns for mice created with different technologies diverged in predictable ways after the NIH agreements. One way they measure the novelty value of new citations is by counting the number of previously unused keywords associated with each article. If a particular article has already been cited a thousand times, but the 1001st citation contains keywords that have never been associated with this mouse before, that is an indication that the research is going in new directions.

Openness agreements led to a burst of novel research
Average rates of new keywords in citations for a sample of articles about genetically engineered mice published in 1992-94. Most articles see declining rates of new keywords over time as new citations tend to cover similar ground as old citations. The Cre-lox and Onco articles were given second life when access to mice created with these methods improved in the late '90s. New keywords proliferated as research went in new directions. 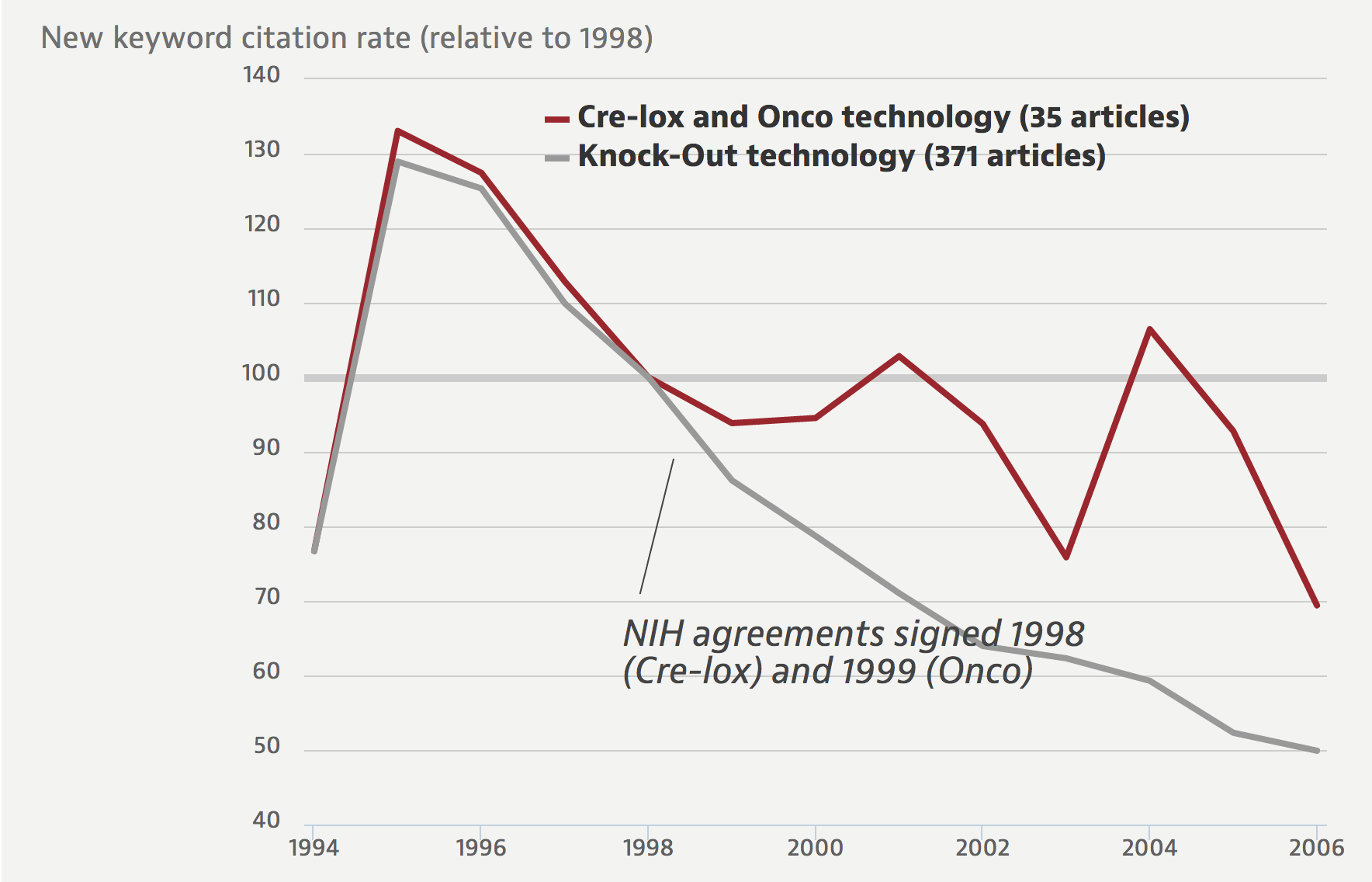 This may happen because a small subset of researchers who have gained access to a mouse are using it over and over for a narrow line of research. Even though a flurry of new articles may be citing the original article each year, they tend not to expand the scope of research very much.

This is consistent with other evidence that the authors found: Cre-lox and Onco articles were frequently cited by new researchers at new institutions after 1999, and the bulk of new citations came from these newcomer authors. This is not too surprising if many new academic institutions were granted access to these mice after the NIH agreements went into effect. As the cost of access to mice declined, it is likely that more labs were willing to take risks and try something new.

The authors find clear evidence that the patents protecting Cre-lox and Onco limited the scope of scientific inquiry by genetics researchers, but the best policy for reducing this type of harm isn’t clear.

The authors note that in this particular case the NIH agreements did not seem to inhibit the creation of new Cre-lox or Onco mice, contrary to what might have been predicted by a more basic economic model of IP protection. Other companies, notably IBM, have also embraced scientific openness with promising results. The authors close with a call for a broader re-examination of the subtle economic effects of patents, especially in fields where private innovation and academic research coincide. ♦

"Of Mice and Academics: Examining the Effect of Openness on Innovation" appears in the February 2016 issue of the American Economic Journal: Economic Policy.