Did the introduction of the printing press bolster social capital in Africa? 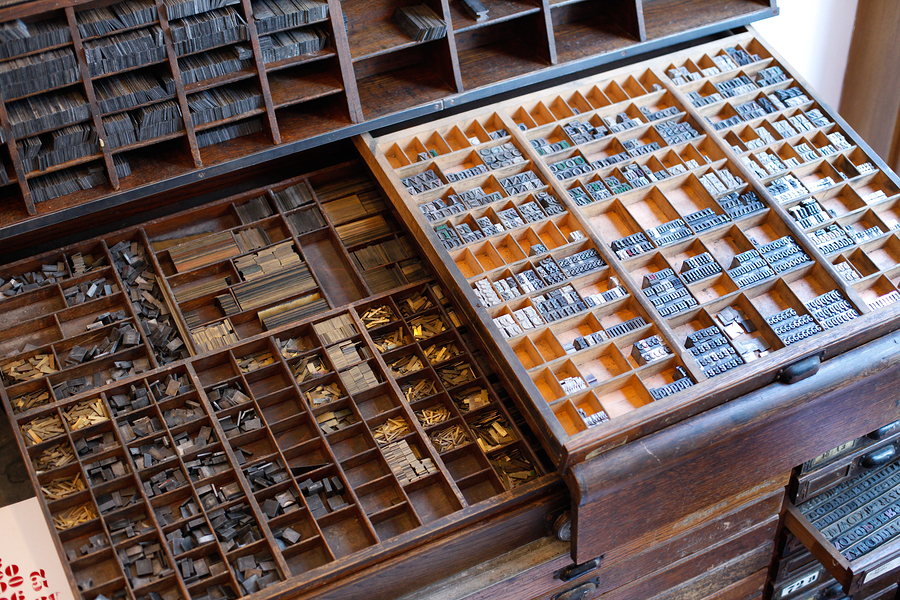 Economists generally agree that a society’s level of social capital – factors like trust and willingness to cooperate – helps its economic and civic development by fostering healthy institutions and facilitating trade. But where do these cultural traits come from, and how does one society develop more trust or camaraderie than another?

A new study appearing in this month’s issue of the American Economic Journal: Applied Economics investigates the role that the printing press, brought to sub-Saharan Africa by Protestant missionaries in the nineteenth century, may have played in strengthening social capital in certain parts of the continent.

In The Long-Term Effects of the Printing Press in Sub-Saharan Africa (PDF), authors Julia Cagé and Valeria Rueda recount the history of Protestant missionaries formalizing the languages of the peoples they encountered in Africa, with the aim of creating Bibles written in the local tongue. Importing printed material from faraway Europe was often impractical due to excessive travel times in the 1700s and early 1800s, and most African languages were completely unknown to European publishers anyway. As a consequence, missionaries sometimes opted to obtain their own printing presses so they could print customized materials to complement their work.

This wasn’t always an easy choice: printing presses were expensive, bulky, flammable, and required specific knowledge to operate. But once they arrived and workers were trained to operate them, they were put to work printing all sorts of written material, not just religious tracts. The first newspaper for African readers appeared in 1837 and was printed at the Wesleyan Missionary Society in Cape Colony, followed in later decades by an increasing number of papers that were edited or published by Africans.

Unlike Protestant missionaries, Catholic missionaries placed little emphasis on having adherents be able to read scripture in their native languages, and few if any of those missions would have had the capacity to print newspapers. The first newspapers appeared much later in areas that were dominated by Catholic powers like France and Italy, where Protestant missions were mostly nonexistent.

The rise of newspapers in some parts of Africa may have helped foster debate in a new kind of public forum; this in turn has the potential to bolster social capital and strengthen civic institutions, even over the course of generations. Historians have argued that a similar process unfolded in western Europe when the printing press appeared there.

But could the arrival of a single printing press in a town over a hundred years ago still be affecting the local culture decades later? Other research has found long-term effects of colonial borders in Africa drawn across ethnic homelands or even the placement of the first schools in Benin. The authors hypothesize that the appearance of the printing press in certain African communities during the 1800s could have far-reaching effects on social capital that might still be measurable today.

They pair this data with tens of thousands of survey responses from the 2005 and 2008 rounds of the Afrobarometer, a survey that investigates civic attitudes, political participation, and media consumption across 19 African countries. Each respondent reports their town of residence, so the authors can determine how close each person lives to the historic site of a Protestant mission with a printing press in 1903.

The authors measure the relationship between proximity to a historic printing press site and indicators of social capital, like education level, newspaper readership, trust, and participation in elections. Using a large set of geographic, historical, and demographic controls, they find that living 1% farther away from a historical printing press site was associated with a 2.5 percentage point decrease in newspaper readership and a 3.6 percentage point decrease in trust, as measured by responses to the question “do you trust people in general?” Proximity to a printing press was also linked to higher levels of education and (in democratic countries) political participation in voting and public marches.

The proximity variable explains only a small amount of the overall variation in social capital between regions, an indication that many other factors affect social capital besides historical printing press locations, but it is notable that there is still a link that is statistically discernable a century later. 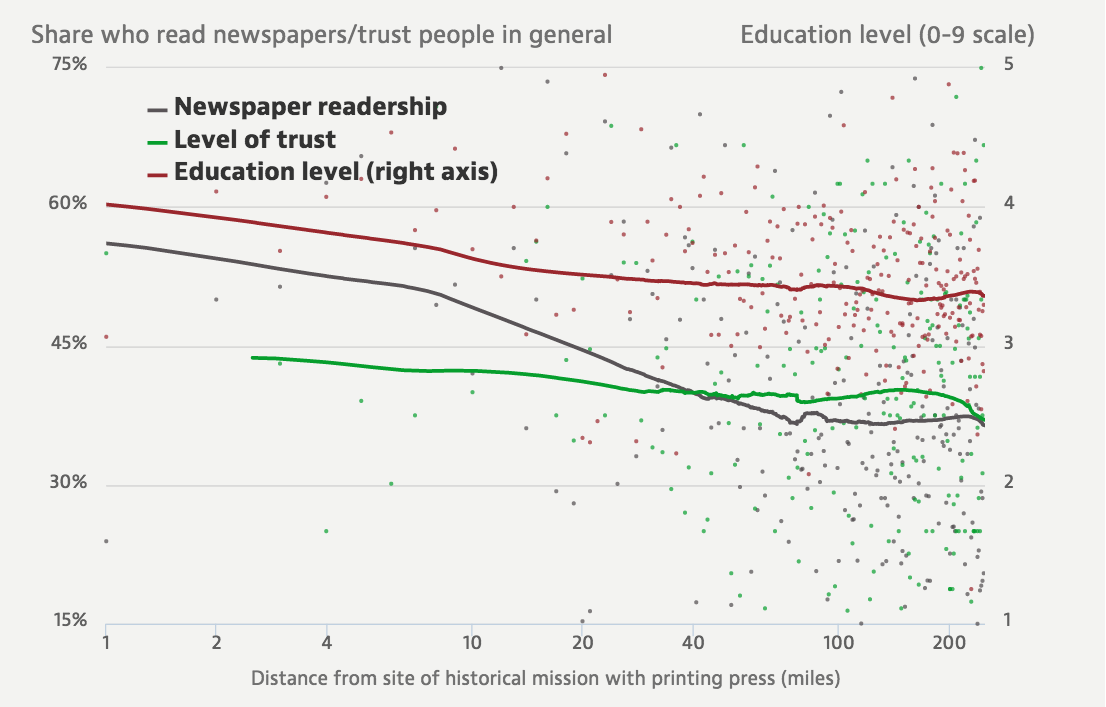 Using a similar methodology, the authors found no comparable connection between social capital and proximity to Catholic missions or proximity to Protestant missions without printing presses.

The authors note that printing presses were not distributed randomly across sub-Saharan Africa, which could mean that this is not really a causal relationship. They find that Protestant missions were more likely to have imported printing presses if they were close to historical cities or routes explored by the earliest European arrivals (perhaps reflecting lower transport costs).

But they may also have been more likely to be placed in areas that missionaries perceived as already having greater social capital and hence more fertile ground for the missionaries’ message. If that’s the case, these findings do not necessarily indicate that the printing press had any effect at all on the local populace, they might merely reflect the strategic considerations of the missionaries.

To address this issue, the authors use a matching strategy, finding pairs of Protestant missions that look similar in the data but differ in whether they actually had a printing press on site. The idea is to create a sample of two sets of missions, one with printing presses and one without, that are otherwise quite comparable. The authors find that even within this matched sample, proximity to a mission with a printing press is more important for social capital than proximity to a similar mission without one.

These results are additional evidence of the ways that economic and civil development in a region over centuries can hinge on seemingly minor investments, like a school here or a printing press there. Economists are just beginning to understand how culture emerges differently in different societies and regions, and often still have trouble finding examples of events that impact the cultures of different people in different ways. The way that the piecemeal introduction of the printing press in sub-Saharan Africa seems to echo in the Afrobarometer data provides a glimpse of how trust and civil engagement can develop over time. ♦

“The Long-Term Effects of the Printing Press in Sub-Saharan Africa” appears in the July 2016 issue of the American Economic Journal: Applied Economics.