Why would anybody want to keep taking on expensive high-interest loans? 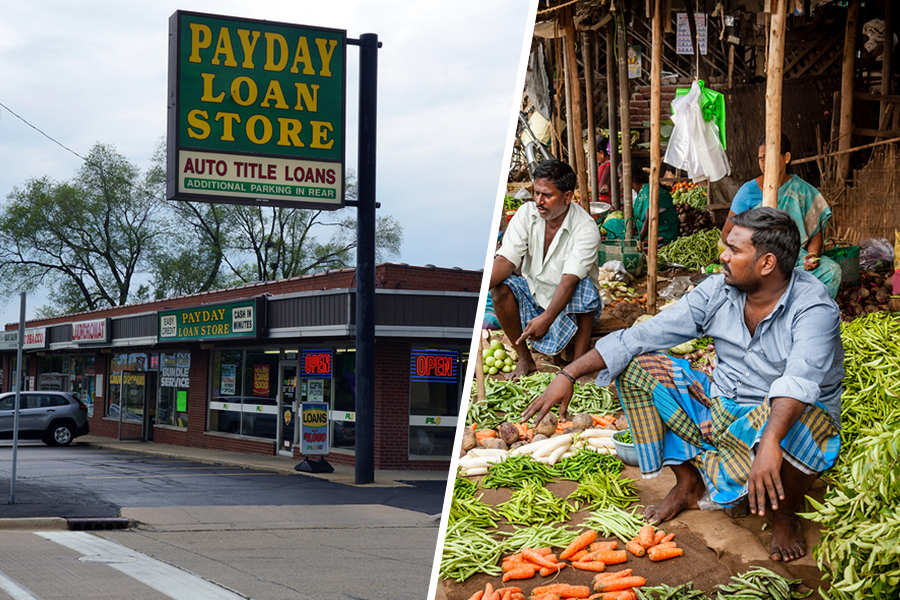 Many vendors in India took on high interest loans.

Staying solvent for small entrepreneurs can be a bit like swimming in quicksand.

It’s not just the day-to-day struggle of covering operating costs. Many are mired in expensive debt.

They might take out a high-interest loan for temporary relief, only to begin a vicious cycle of taking out more expensive loans to cover the rapidly accruing interest.

Why would retail vendors continue to borrow at these rates instead of getting out of debt?

It’s a common and confounding pattern.

“The puzzle is a pretty classic puzzle,” said Ben Roth, an assistant professor at Harvard, in an interview with the AEA. “Many people have noticed very high rates of serial borrowing at what seems to be very high interest rates. Why would retail vendors continue to borrow at these rates instead of getting out of debt?”

In the June issue of the American Economic Review: Insights, Roth and coauthors Dean Karlan and Sendhil Mullainathan explore whether reliance on these high-interest loans is a kind of "debt trap," in which borrowers are unable to free themselves from debt, or reflects a predisposition toward borrowing because of other constraints borrowers face.

The paper focuses on experiments in the Philippines and India, but the issue shares much in common with the payday lending industry in the United States. Millions of Americans turn to high-interest lenders for short-term cash shortfalls, and then subsequently dig themselves deeper into a hole because they cannot afford to pay back snowballing interest growing at rates as high as several hundred percent annually.

Trouble Paying the Bills
American consumers who rely on high-interest payday loans often have trouble covering their living expenses. A majority of borrowers surveyed by The Pew Charitable Trusts said they have trouble paying bills at least half the time, represented in green. Only 14 percent said they never struggle to pay their bills.

In three experiments conducted between 2007 and 2010, the authors gave out grants to clear the debts of small vendors in India and the Philippines, essentially allowing them a “do-over.” They then paired that with very basic financial training to ensure that these entrepreneurs were aware of the high costs of these loans.

Being debt-free and learning a bit about the cost of the debt seemed like a good way to give people a boost and a salient reminder that could then keep them out of debt going forward. If they then go back into debt anyway, that would teach us that something other than a debt trap explains why they persistently borrow from such high interest rate lenders. That’s exactly what happened.

“People go back into debt,” Karlan said. “There’s an initial drop, but in a year, everybody’s back into debt. That suggests it’s not a debt trap story, because they do go back in. Whatever led them to go into debt at some point comes back.”

There may be situations when high-interest lenders are simply the best option available to business owners. Still, it’s difficult to know why they wouldn’t use the opportunity to save their money in a “rainy day” fund so they could cover an unexpected expense rather than turn to expensive loans. Maybe they didn’t absorb the financial lessons, don’t have access to banks or other safe places to store their money, had a lot of unexpected expenses occur, or just lacked personal discipline.

While the evidence from the three experiments doesn’t provide a single clear answer, the authors discuss several potential explanations. They say the right answer is undoubtedly a mix of each.

Understanding how and why people get into these debt cycles is critical for policymakers hoping to address the issue. If it’s shocks to their income, then perhaps there’s a role for social insurance to play. If it’s education or financial literacy, then it might be useful to consider different approaches to inform consumers about the cost of debt.

“We don’t understand that as much as we need to in informal lending market policy,” Kaplan said. “Part of what we see from this is that there’s a certain level of acceptability and flexibility that is desired by people. What can we do in the formal sector to make loans more flexible for people?”

"Debt Traps? Market Vendors and Moneylender Debt in India and the Philippines" appears in the June issue of The American Economic Review: Insights.