Dreaming of an education 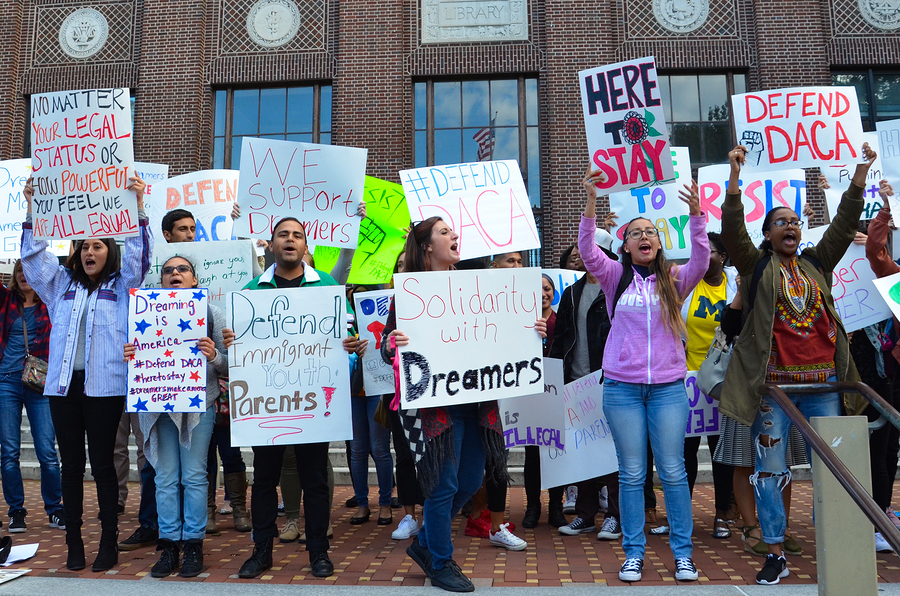 Pursuing education is an act of hope, the beginning of building toward a dream.

Hundreds of thousands of undocumented migrants living in the US have dreams, too, but are wondering whether to defer them.

“People are scared because they don’t know how the courts are going to rule,” Leezia Dhalla, a spokesperson for the immigration advocacy group FWD.us, told Vox Media in October 2019. “There is a lot of fear about how the Trump administration is going to handle our information if DACA ends.”

DACA, or the Deferred Action for Childhood Arrivals program, provides protection from deportation to undocumented people who were brought to the US as children. The Trump administration has sought to end the Obama-era program. While it remains in limbo in a case before the Supreme Court, so do the fates of nearly 700,000 “DREAMers.”

Should the program survive, there would be significant impacts on the educational decisions of hundreds of thousands of migrants, according to a paper in the American Economic Journal: Economic Policy. The research offers insights into how immigration laws influence the decisions young people make to invest in developing their skills.

“There are a lot of concerns about undocumented people coming here; they’re not working, they’re not educated,” co-author Elira Kuka told the AEA in an interview. “We show that, given the incentives to go, they will succeed.”

Implemented in 2012, the DACA program is open to those who were brought to the United States before they were 16 years old and have lived here at least five years. It does not provide a path to citizenship, but it does allow recipients to work legally and to renew their two-year reprieves from deportation. They must have a clean criminal record and meet certain educational requirements that include pursuing a high school degree.

Hoping to Stay
The number of new applicants to the Defered Action for Childhood Arrivals program (DACA) has declined significantly since it was started in 2012. The majority of approvals in 2019 were for renewals.
Source: US Citizenship and Immigration Services (2019)

The program has broad support in the US, with nearly three-quarters of Americans favoring granting permanent legal status to immigrants brought to the US as children. But the Trump administration has sought the court’s permission to end the program, with the president raising concerns about their criminal conduct.

One challenge in studying the impacts of the program is finding data that identifies the population most affected. After all, they are undocumented. As a proxy, Kuka and co-authors Na’ama Shenhav and Kevin Shih examined foreign-born noncitizens who were Hispanic—who account for the largest share of undocumented migrants in the US—and compared them to Hispanics who were legal citizens.

The takeaway is that school decisions really respond to incentives for these people.

They found that DACA significantly boosted school attendance of 14 to 18-year olds, closing the education gap with their citizen peers by 55 percent. It also increased high school completion among 19 to 22 year olds by 7.5 percent. The results imply that more than 49,000 additional Hispanic youth obtained a high school diploma because of DACA.

“The takeaway is that school decisions really respond to incentives for these people,” Kuka said.

Men were affected twice as much as women, likely due to the higher likelihood of men being deported. A program that protects them from getting expelled from the country is going to resonate more.

The Supreme Court is expected to rule on the fate of the program later this year. Supporters are urging Congress to make the program permanent—it was implemented under an executive order by Obama. Kuka says this research suggests there would be significant upsides from its continuation, perhaps even addressing the concerns its detractors are using to argue against it.

“An immigration policy that provides incentives for education can mitigate some of the negative traits that people may be afraid of,” Kuka said. “If they’re worried undocumented people have high fertility rates, low education, low wages, you can design immigration policies that mitigate this concern.”

“Do Human Capital Decisions Respond to the Returns to Education? Evidence from DACA” appears in the February issue of the American Economic Journal: Economic Policy.

A public policy debate that goes back more than a century