Conspiracies against the public 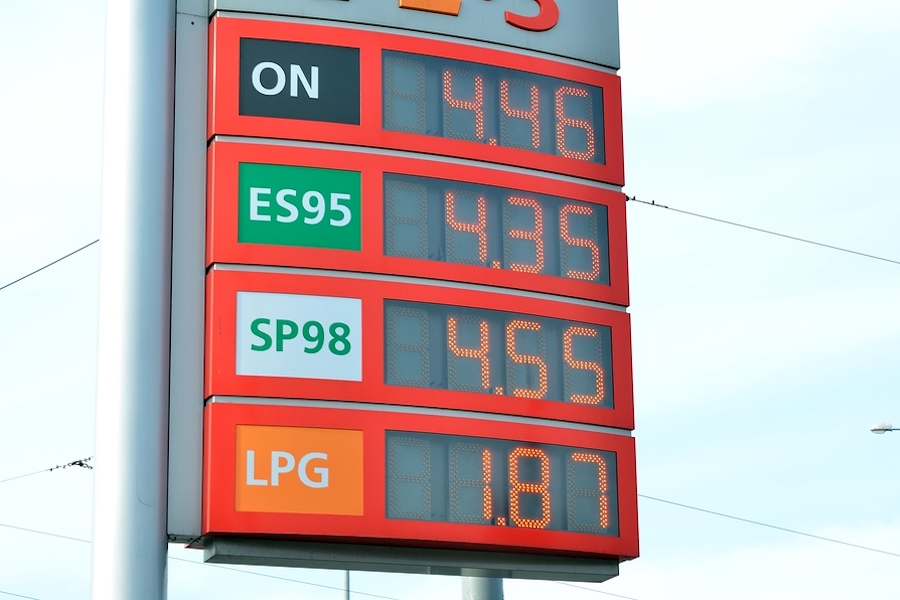 Prices on display at a gas station in Torun, Poland, February 21, 2015. OPEC is an organization of oil-rich states that attempts to influence the global price of oil.

It’s one of the most basic principles of economics: if something that people value gets more scarce, the price will go up. Some goods, like gold jewelry or aged scotch, are naturally quite scarce, if they are made from rare materials, or require some unusual expertise or long process to make. But long ago, companies realized that artificial scarcity is almost as good as the real thing.

When companies conspire to hold down output in order to raise prices (and boost profits), they form what is called a cartel. Even a relatively cheap and common good can become expensive if the people who supply it are able to keep only a small amount flowing into the market.

Rather than working full-tilt to undercut their competitors and provide customers the cheapest product, rival companies can often make a lot more money with a lot less effort if they are able to work together.

The potential for companies to give up on competition and form cartels was recognized in Adam Smith’s day, and led to an array of anti-trust laws during the nineteenth century designed to combat the problem. Still, perhaps the best protection against cartels is the strong temptation for cartel members to cheat on the deal.

People of the same trade seldom meet together, even for merriment and diversion, but the conversation ends in a conspiracy against the public, or in some contrivance to raise prices.

This is routinely a problem for the Organization of Petroleum Exporting Countries (OPEC), one of the most widely known cartels, which exists for the purposes of keeping oil prices high. Member nations agree to production quotas at regular meetings. But if every other country is cutting back oil production and propping up the price, more money can be made by increasing output, stealing other country’s customers, and cashing in at the high price.

If everyone does this though, prices fall, defeating the entire purpose of the cartel. How can participants deter cheating? The standard textbook economics answer is that firms sustain collusion by threatening massive retribution when someone tries to undermine the cartel.

The prospect of a huge price war that drives profits down for the cheater is the mechanism to keep cartels hanging together. In long-standing economic models of cartels, this punishment is designed to be so severe that no one ever cheats, and it will thus never need to be used.

But studies of OPEC and other present-day and historic cartels has revealed they don’t operate this way in the real world. Contrary to the predictions of textbook models, cheating is apparently quite common, and often goes unpunished. A study appearing in this month’s issue of the American Economic Review reviews this economic puzzle and offers a more nuanced type of cartel agreement that can make sense of continual cheating.

Authors B. Douglas Bernheim and Erik Madsen note several examples of cartels uncovered by prosecutors in the U.S. and Europe where cheating was apparently commonplace. In markets for products ranging from citric acid to food flavor enhancers to sugar, cartel participants discovered their partners were cheating: upping output levels or going behind each other’s backs to offer customers lower prices. In each case, cheaters avoided serious punishments and got away with commitments to being more faithful to the cartel in the future.

Does this mean these cartels were ineffective, or not ever really operating as cartels at all? The latter interpretation has been embraced by defense attorneys in anti-trust proceedings.

In one high-profile prosecution of Archer Daniels Midland, a U.S. food conglomerate whose executives were caught on tape conspiring with companies from Japan and Korea to fix the price of a livestock feed additive called lysine, defense attorneys boasted about the underhanded and deceptive tactics used by ADM towards its rivals. This was presented as proof that ADM was not actually part of any cartel and was competing hard against the Japanese and Korean companies.

Thanks to copious video and audio evidence obtained by ADM executive-turned-informant Mark Whitacre, the lysine cartel is one of the best understood and most studied collusive schemes in history, and the inspiration for the 2009 movie The Informant! starring Matt Damon as Whitacre.

The lysine cartel: an economic roller coaster
Prices for lysine, an additive in livestock feed, 1990-96. Secret audio and video recordings of meetings between executives from American food conglomerate Archer Daniels Midland and companies from Japan and South Korea revealed ongoing attempts to fix prices in this market. Prices recorded during the approximate period of the conspiracy are highlighted. See source for more details on the timeline of the cartel as it has been reconstructed from court records. 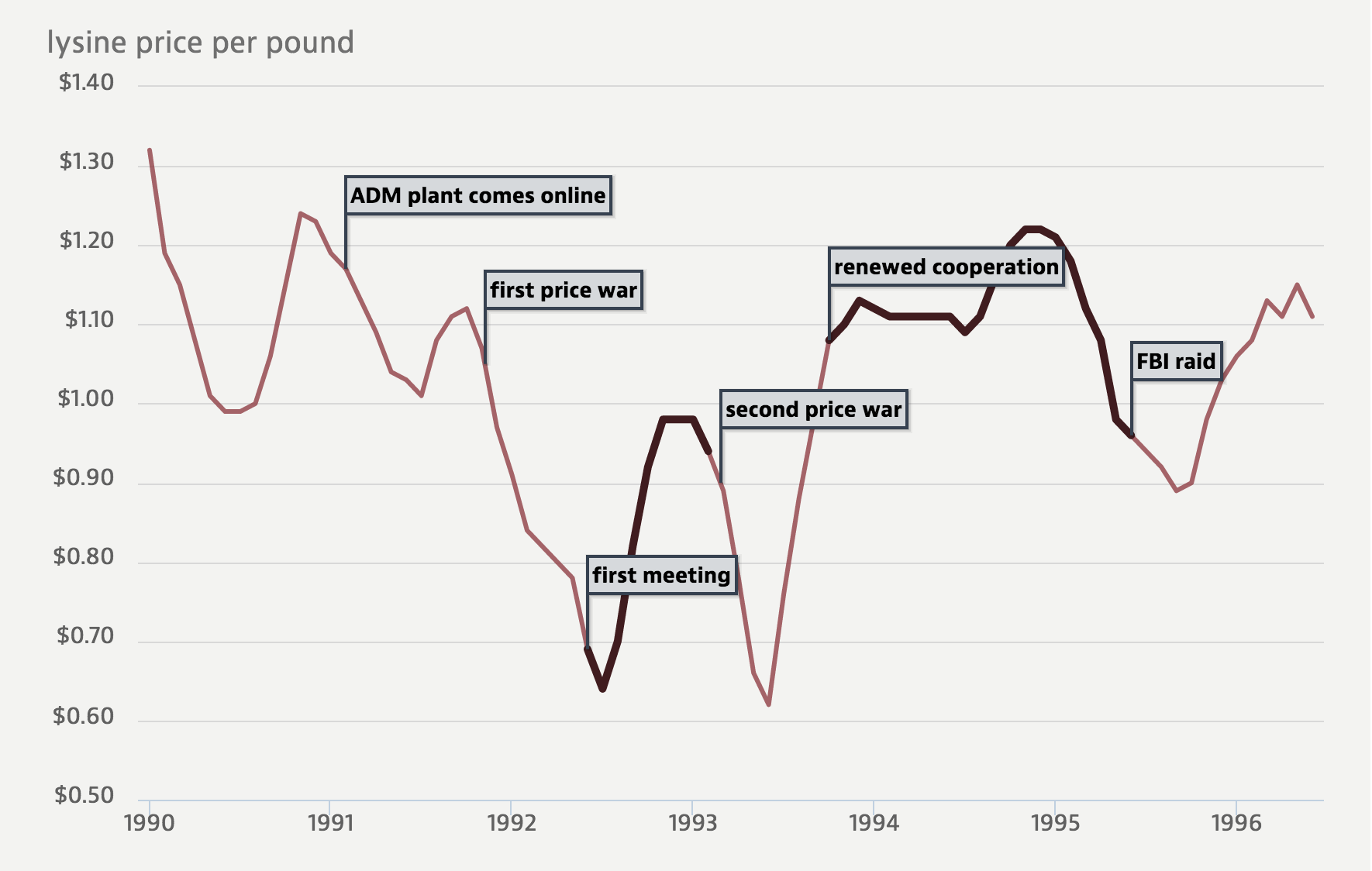 The lysine cartel certainly had its ups and downs, including breaches in trust and a renewed commitment to high prices (see figure above). Bernheim and Madsen argue that signs of competition and distrust between rivals are not necessarily incompatible with collusion.

They present an alternative model of a cartel where each participant has a “home” market where they have a natural advantage. This could happen if certain companies are better positioned in certain regions of the world or have relationships with certain major customers.

In this arrangement, each cartel member can corner their own home market but can also try to make incursions into rivals’ markets as long as they don’t reduce prices below a specified threshold. As long as they don’t compete “too hard” in someone else’s market, they won’t be punished.

This allows limited competition, which can look like cheating or non-cartel behavior from an outsider perspective, within the bounds of the agreement. It provides an outlet for companies who may otherwise be tempted to completely renege, and is more sustainable because it doesn’t require painful punishments for each minor instance of business stealing.

The authors don’t necessarily think this is a precise model for any specific real-world cartel, but they argue it can be used to better understand the seemingly dysfunctional cartels that have been observed in recent prosecutions. It also raises the question of whether businesses have hit upon subtle forms of collusion that economists didn’t previously consider.

In an interview with the AEA, Madsen suggested that this finding means policymakers and anti-trust regulators should think about collusion – and its many possible forms – more broadly. Just because a group of companies don’t seem to behaving like a classic cartel, with strict output quotas and harsh punishments for cheaters, doesn’t necessarily mean they aren’t participating in what Adam Smith would have called “a conspiracy against the public.”

Price Cutting and Business Stealing in Imperfect Cartels appears in the February 2017 issue of the American Economic Review.