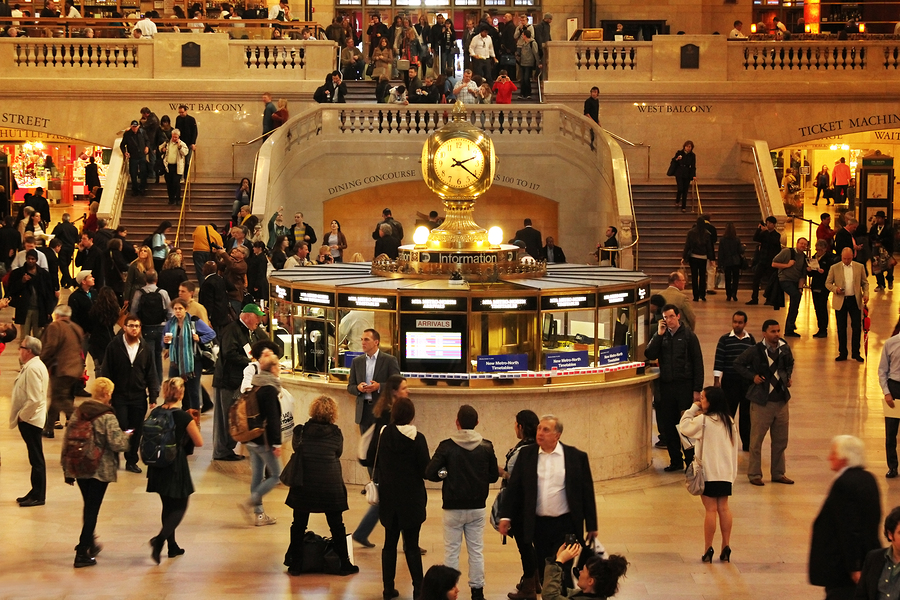 The clock at the information booth at Grand Central Terminal. A survey during the 1950s found that this was a natural meeting point for people trying to connect in New York City.

Let’s say you know you have to meet a stranger in your city sometime tomorrow. The only problem is that neither of you can communicate in advance about when or where to meet. Do you think you could still manage to show up at the same place and time?

Thomas Schelling, the Nobel-winning game theorist who passed away earlier this month, found in an informal survey that many of his students tended toward the same answer when posed this question about New York City: they would wait under the clock in Grand Central Station at 12 noon, hoping their partners had the same idea.

He introduced this concept in his 1960 book The Strategy of Conflict as a “focal point” – a solution to a coordination problem that somehow stands out as the natural answer even if the participants don’t have a chance to arrange it beforehand. Schelling argued that people’s apparent ability to coordinate without communicating was key to understanding how real-life strategic games are solved.

As game theory has developed in the decades since, Schelling’s ideas about focal points have been rarely studied, partly because the existence of focal points was perceived more as a mysterious, sociological phenomenon rather than an economic one amenable to analysis.

Schelling argued that people’s apparent ability to coordinate without communicating was key to understanding how real-life strategic games are solved.

Schelling himself said trying to determine the focal point of a game analytically is like trying to use a computer to understand whether a joke will be funny – it depends on cultural context and the relationship of the people trying to coordinate. Even the classic Schelling focal point of Grand Central might not apply if you asked different groups of New Yorkers who lived in different parts of the city or never took the trains that pass through the station.

The existence of focal points is mildly reassuring if you’re trying to meet up with a friend and lose your phone or get separated from your companion in a crowded place. But Schelling’s career was consumed with weightier considerations, like negotiations between countries on the brink of thermonuclear war.

In a 2014 study appearing in the American Economic Review, authors Andrea Isoni, Anders Poulsen, Robert Sugden, and Kei Tsutsui, have test subjects play bargaining games with and without focal points to see if they can skew negotiations in a controlled environment. The stakes are low -- only a few dollars -- but these experiments can tell us how powerful focal points really are.

An earlier study cowritten by Robert Sugden, one of the authors of the current study, illustrated that people actually have an understanding of what it takes to coordinate, rather than just picking the most salient or obvious answer.

Test subjects received a questionnaire with items like “name a year” or “name a city in England.” When they were merely asked to think of the first answer that came to their minds, many provided their birth year or home town.

But when they had incentive to coordinate – they were told they would be paid if they managed to answer the question the same way as an anonymous partner – most chose 1990 (the year at the time) and London (the largest city in the UK). These aren’t necessarily the first answers to spring to mind, but upon reflection they are the best options when trying to match a partner.

In the 2014 study, Sugden and his colleagues set up their test subjects in a more adversarial setting, positioned across a game board with several disks representing sums of money (follow link for example game boards). Players had 90 seconds to negotiate how the disks would be divided, with the caveat that if any disk was claimed by both players after 90 seconds, neither player would get any money.

In some of the games, the disks were positioned evenly between the players’ bases, denoted with “L” and “R” in the figure below. In others, the researchers positioned them suggestively to one side, even though the position on the board didn’t affect the mechanics or rules of the game in the slightest.

An offer you can't refuse
Diagrams illustrating two of the bargaining games administered to test subjects. Players (represented by bases labeled "L" and "R") had 90 seconds to claim disks on the board, with the caveat that if both players were claiming the same disk at the end of 90 seconds, neither would get any. Even though the location of disks on the board was technically irrelevant, placing disks suggestively (game board on right) seemed to skew the bargaining results.

The players could communicate through a computer terminal, like superpowers bargaining over spheres of influence. When both players claimed the same disk, a standoff would ensue until one player withdrew her claim, or the game ended and both players ended up with nothing.

The researchers argue that their layouts create a natural focal point for negotiations (“you get the disks on your side, I get the ones on my side”) even though in principle any player could claim any disk. They wanted to see if the focal points they created had any suggestive power to bend negotiations toward whichever player had more valuable disks closer to them.

The results were mixed, with many matchups devolving into games of chicken where both players claimed the most valuable disk until one person retreated right before the 90-second buzzer. In some cases though, the focal point seemed to move the needle. In the unbalanced game pictured above, the left-hand player averaged 10% more money than the right-hand player across 72 distinct matches, even though the only advantage was psychological.

Can this teach us about how negotiators will think when the stakes are much higher? Some have argued that focal points are meaningless in negotiations where the participants can actually communicate with each other – who cares if most people would gravitate toward Grand Central Station if they can talk beforehand and arrange to meet wherever they chose?

Schelling argued that focal points could still matter if negotiations come down to the wire and each player must make a final, last-second decision about how aggressive to be and how much they trust their adversaries.

In an interview with the AEA, Sugden suggested that American inaction during the Soviet invasion of Hungary in 1956 and the Soviet Union’s retreat at the peak of the Cuban Missile Crisis may have reflected a tacit agreement between the superpowers to concede to each other in their respective spheres of influence. A focal point may have helped the U.S. and U.S.S.R. avoid a situation where both sides pressed too hard in the same place at the same time, with unimaginable consequences.

Schelling’s work on focal points is sometimes considered an early contribution to a field that would come to be known as behavioral economics. As behavioral economics continues to work its way into the economics mainstream and talk of a renewed nuclear arms race is making headlines, Schelling’s insights about coordination and negotiation may prove to have been ahead of their time.

Efficiency, Equality, and Labeling: An Experimental Investigation of Focal Points in Explicit Bargaining appears in the October 2014 issue of the American Economic Review.