Did the "Cash for Clunkers" program actually hurt automakers? 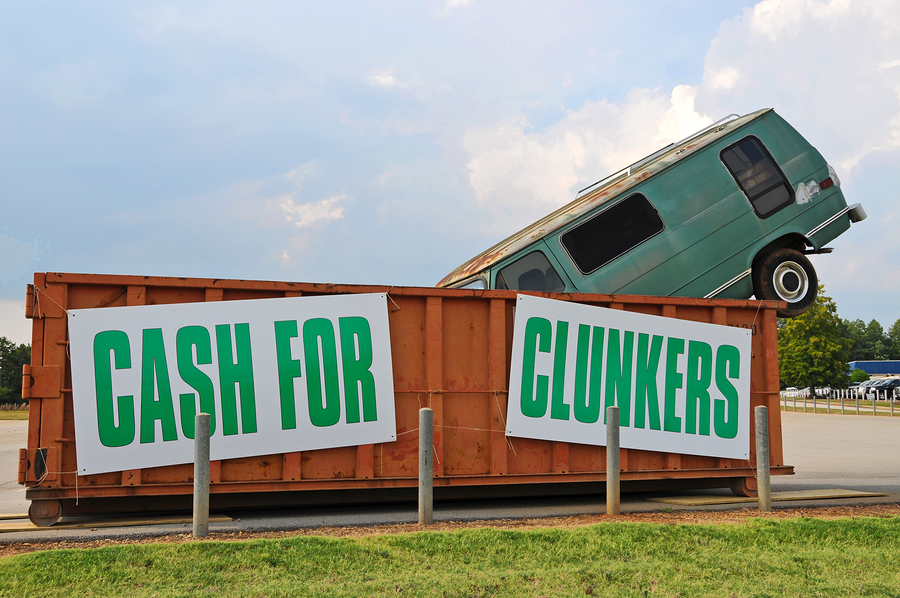 The Cash for Clunkers program provided a short term boost for auto sales in 2009, but may have done more harm than good over the long term.

Automakers were precariously close to collapse when, in the summer of 2009, Congress passed a law intended to give the industry a jump start.

Dubbed “cash for clunkers," the government was offering roughly $4,200 to people if they traded in their old gas guzzler for a newer fuel-efficient car.

It was the kind of legislation that included something for everyone, a triple threat that New York Senator Chuck Schumer called a “win-win-win.”

"Cash for clunkers is a new engine for automakers; a tune up for the environment; and a jump start for communities across the country whose economies are dependent on a strong auto industry," Dave McCurdy, CEO of the Alliance of Automobile Manufacturers, said at the time.

In fact, the $3 billion stimulus program was an abject failure that did more harm to automakers than good, according to a paper that appears in the July issue of American Economic Journal: Applied Economics.

Authors Mark Hoekstra, Steven Puller, and Jeremy West say the program’s efficiency requirement convinced people to buy smaller, less expensive cars than they otherwise would have had the incentives never existed, thus reducing new vehicle spending by $5 billion below what it would have been.

“The first objective of the stimulus was generating sales in the auto industry. But at the same time they said, ‘Let’s also try to get this environmental benefit,’ ” Hoekstra said in an interview with the AEA. “The way people responded in net is they bought smaller, cheaper, more fuel-efficient vehicles.”

Car dealers did, in fact, see a spike in sales when the program went into effect, but all of the additional purchases were by people who were going to buy a new car within the next few months anyway. The authors estimate that nearly two-thirds of subsidies went to people who were going to buy a car during the program period regardless of whether they qualified for the program. And because of the efficiency rule, rather than buy something like a $27,000 Chevrolet Equinox, they would use their government subsidy to buy a $19,000 Toyota Corolla.

Borrowing from the future
The "Cash for Clunkers" program aimed to stimulate consumer spending on new cars in the depths of the Great Recession. There was a spike in sales when the program went into effect in July and August 2009, a period indicated by the shaded bar in the chart below. But those sales were to people who planned to buy a car soon anyway and just moved up the timing of their purchase. 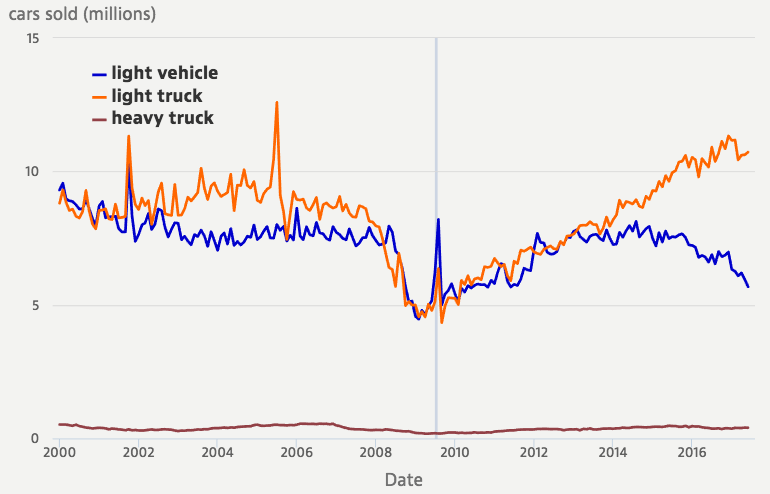 Other papers found the program fell far short of its goals to stimulate auto sales, but Hoekstra and his co-authors were most interested in exploring how the twin goals of the program — boosting auto sales and getting emissions-spewing guzzlers off the road — interacted.

Though well-intentioned, the efficiency rules did more harm than good. Most people used the cash to buy cheaper gas-powered cars instead of going electric, spending an average of around $8,000 less on a new vehicle than they otherwise would have. Meanwhile, the authors estimate it generated only $253 in environmental benefits per car, compared to an average taxpayer cost of $4,210.

“If your objective is to design a stimulus policy, then I think certainly for starters adding on that environmental component  was a mistake,” Hoekstra said. “It’s hard to argue that something is going to be good for the auto industry when it reduced spending.”

To figure out whether people planned to buy a car, Hoekstra and his colleagues looked at consumers in Texas who were “on the bubble” of qualifying for the program. Specifically, they looked at households that owned “clunker” cars rated at 18 miles per gallon or less — those who qualified — and households that just missed qualifying because they owned a car with slightly higher m.p.g. rating. Then, they compared the behavior of the barely eligible households to those who were barely ineligible.

I think it would be useful to try to generate new sales instead of trying to pull forward sales from the future.

The people who qualified were much more likely to buy a new car during the two months of the program. But failing to qualify didn’t mean that someone wasn’t still going to buy a car at some point. Instead, they just waited a few more months. The authors estimate that the program convinced consumers to move up their car purchase by eight months, at most.

Instead of borrowing from future sales by subsidizing purchases that people were already going to make, a better policy would have been to target those shoppers who weren’t going to buy a car, thus generating new sales, Hoekstra said. For example, policymakers might have wanted to offer bigger subsidies of at least $10,000 targeted at low-income households, he said.

“I think it would be useful to try to generate new sales instead of trying to pull forward sales from the future,” he said.

Hopefully, Washington won’t soon find itself scrambling to save the American auto industry again. Although one can never be too sure what will happen. After two years of record sales, car makers appear to be looking at dark times ahead. Sales in June were down 3 percent from a year ago, according to The New York Times, and auto plants are beginning to cut their workforces.

Cash for Corollas: When Stimulus Reduces Spending appears in the July issue of the American Economic Journal: Applied Economics.