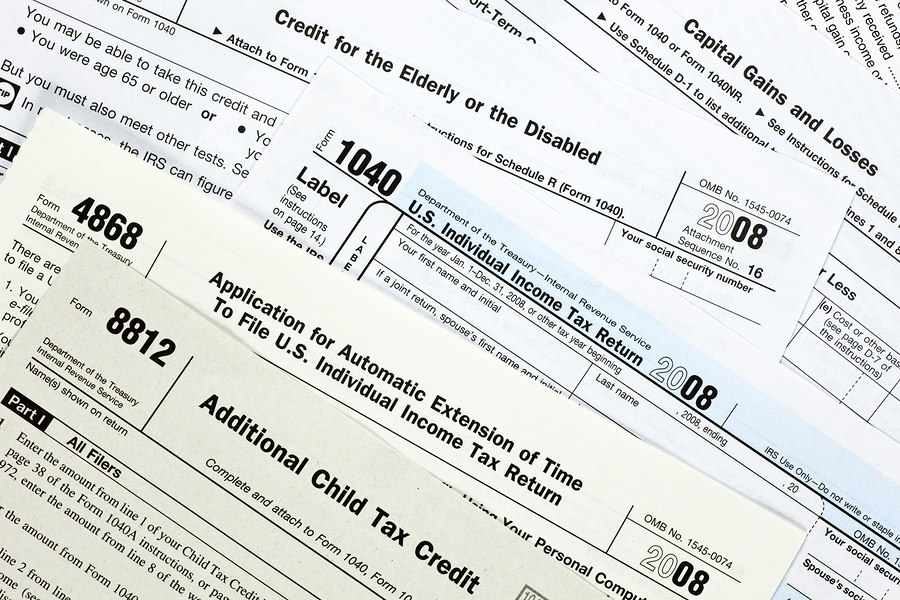 A multitude of IRS forms for federal income taxes.

As U.S. taxpayers grudgingly prepare to file their taxes over the next two weeks, many are briefly reacquainting themselves with vagaries of the tax system like capital gains or education tax credits that they will then proceed to forget about again until next April. Some will skip this step entirely and hand a pile of forms over to a tax preparer, never giving it another thought.

The federal tax code is notoriously complicated and confusing, loaded with deductions and credits that in principle are designed to encourage or reward certain behaviors while penalizing others. But most people have more pressing things to do than figure out how to avoid the alternative minimum tax or calculate their passive activity losses.

All this complexity begs the question: do people understand the basics of how their taxes are calculated and how changes in their behavior do and do not affect their ultimate tax bill? An article from this month's issue of the American Economic Review draws on tax records from nearly one million households to probe taxpayers' understanding of their own incentives.

In Taxpayer Confusion: Evidence from the Child Tax Credit (PDF), authors Naomi Feldman, Peter Katuščák, and Laura Kawano argue that the expiration of the Child Tax Credit when a child turns 17 provides a great opportunity to test taxpayers' intuition. Losing the tax credit does not impact one's marginal tax rate, but it does mean a lump-sum increase in tax liability of $1,000 for most taxpayers with moderate incomes. Taxpayers who lose the credit this year will see their tax bill increase (or refund decrease) by precisely $1,000, assuming no other changes between this year and last.

Savvy taxpayers who realize that this occurred because their child turned 17 will understand that this doesn't affect their incentives next year. Their marginal tax rates are still the same, so any decision with tax consequences – should I increase or decrease work hours? shift investments to tax-free bonds? – is the same as it was before. They simply have $1,000 less disposable income each year going forward.

[T]he US tax code is highly complex. As a result, it may be costly for taxpayers to fully understand the tax rates that they face and, thus, their tax-induced incentives. . . . Instead, taxpayers may opt to form their beliefs about the relevant tax rates by applying simple heuristics based on information that becomes readily available when interacting with the tax system.

But taxpayers who aren’t paying as much attention might notice a higher tax bill and not make the connection to the lost tax credit. These "ex-post confused" taxpayers as the authors call them may ascribe the increase to imagined tax hikes coming from Washington, or might assume that another recent change (like a raise at work or a mortgage finally paid off) pushed them into a higher tax bracket even if it didn't.

If a confused taxpayer thinks his tax rate has just gone up, he might react in ways the authors of the Child Tax Credit legislation never intended taxpayers to react when they lost the credit – by reducing his work hours or dropping a second job next year.

The authors try to measure this effect by tracking families over time and closely examining tax returns filed in the period after a dependent turned 17 and aged out of the credit. They focus on families with children or dependents with birthdays in December or January, so that they can follow two parallel groups with children of very similar ages but whose tax credits expired in different calendar years.

For instance, the dataset includes people filing their 2008 taxes if they had children or dependents who turned 17 in December 2007 or January 2008. The December-birthday group lost the Child Tax Credit the previous year (on their 2007 tax forms) so they already saw an abrupt increase in taxes a year ago by the time they are filing taxes for 2008. The January-birthday group meanwhile is about to lose the Child Tax Credit for the first time and would not have noticed anything unusual on last year's tax forms.

The authors' hypothesis is that this is the moment when confusion will become evident. If most taxpayers are not confused, the two groups should look broadly similar in 2009 because neither group is systematically overestimating its tax rate and the children in question are very close in age even if they were technically born in different years.

But if a large group of taxpayers are confused after losing the credit and respond by cutting back work hours, the two groups will look different. The families with a dependent born in December (who lost the tax credit a year earlier) will report less wage income in 2009.

Not-so-sweet seventeen
Labor income reported by taxpayers with dependents who recently aged out of the Child Tax Credit, 2004–2011. Taxpayers whose dependents have birthdays in December already lost the credit the previous year, while those with dependents born in January are losing the credit this year. Those who already experienced an increase in their tax bills last year report significantly lower income this year, perhaps due to confusion about their tax rates.
Source: adapted from Figure 3, Panel C in Feldman et al. (2016)

The figure above shows that the December-birthday group does indeed report significantly less income than the January-birthday group in the year after losing the tax credit. The authors' dataset includes returns filed from 2004 to 2011, so they are able to look at eight sets of comparison groups, not just one year's worth.

The authors acknowledge that other changes having nothing to do with taxpayer confusion could be happening right around this time if a child is leaving for college or entering the workforce. These changes might be reflected on tax returns, but there is no particular reason that the December-birthday group and the January-birthday group should differ, except perhaps for school enrollment rules (the authors sift out the data from four states where the cutoff for kindergarten enrollment falls on December 31).

These results are based on income reported by filers on their tax forms, so there is another alternative explanation: people are earning the same amount of income, but reporting less to the IRS (alternatively they could be pursuing legal forms of tax avoidance like topping off retirement accounts while maintaining their work levels). Even if that is driving some or most of the effect, it’s still a sign that taxpayers are failing to understand that their incentives haven't changed.

Notably, the Child Tax Credit expiration effect is less pronounced for certain groups of people: older filers, people with self-employment income, and people with capital gains from investments or home sales. These people have something in common: they have had more opportunities to interact with the tax system and potentially greater need to understand some of the intricacies of the tax code. This could explain why they show less evidence of confusion when the Child Tax Credit vanishes from their tax bill.

The authors’ finding is subtle but speaks to a larger point about whether people understand the basic incentives presented by an income tax. And while the Child Tax Credit provides a particularly good opportunity to catch confused taxpayers in action because of the sharp calendar cutoff, there are plenty of other tax code complexities – like the mortgage interest deduction or the alternative minimum tax – that might create far larger unintended consequences that are just not as easy to observe.

It’s a reminder that crafting tax policy is difficult but the authors also note that taxpayer confusion might actually be a good thing for society. Income taxation (in theory) provides a disincentive for people to be economically productive, but if people are confused about the tax rate they pay, and specifically if they confuse their marginal rates with their average rates, they may perceive less of a disincentive. These blissfully unaware taxpayers might be happily working longer hours than they would if they actually understood how their taxes worked. ♦

"Taxpayer Confusion: Evidence from the Child Tax Credit" appears in the March 2016 issue of the American Economic Review.