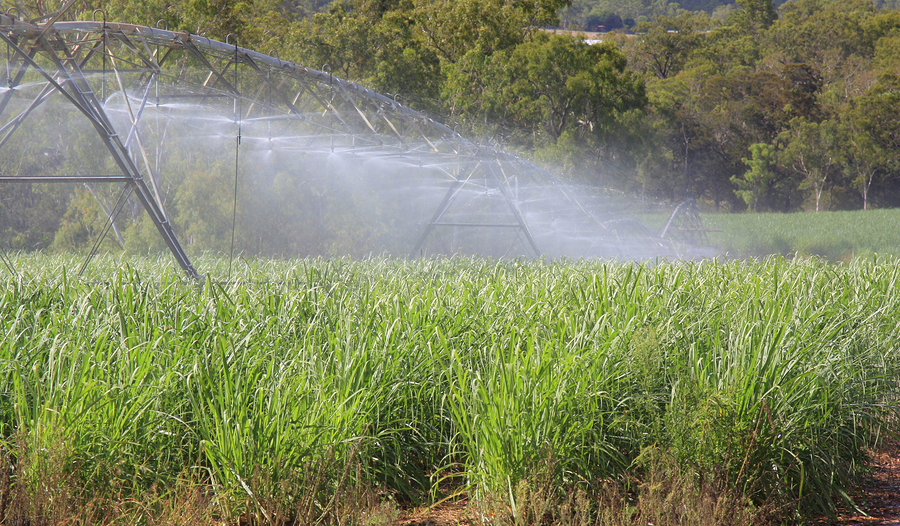 Irrigated sugarcane field in Cairns, Australia. Sugarcane farming is among the most water-intensive processes in the world.

As the state of California takes increasingly stringent measures in the face of a multi-year drought, there is mounting concern that water shortages will hamstring the state's economy. While we are in no danger of running out of water on a global level, regions from California to Pakistan to northeast Australia are being stretched to the limit by rising water demand and changing weather patterns.

Water resources are distributed quite unevenly around the world, but global export markets can help alleviate water imbalances by allowing countries and regions rich with fresh water to focus on the production of water-intensive goods. A recent article appearing in the American Economic Journal: Applied Economics uses an economic model of international trade to better understand the role of water in the global economy.

In The Global Economics of Water: Is Water a Source of Comparative Advantage? (PDF), author Peter Debaere asks whether water resources have any bearing on a country’s exports. In the 1990s, hydrologists began to consider the fact that while water is not actually shipped internationally in bulk, it is effectively traded in the form of finished goods that require water to produce. When a carton of shirts crosses the Pacific in the hold of a cargo ship, the thousands of gallons of water that were required to make them do not need to come along. Still, that water can be thought of as part of a worldwide "virtual water" trade.

In this way, water-scarce countries can enjoy the bounty of water-produced goods, and conserve their smaller water resources. This is the basic trade theory of comparative advantage at work. But if global trade is highly dependent on water availability, then changing precipitation patterns have the potential to significantly disrupt the economies of several countries.

Freshwater is distributed unequally across the globe
Freshwater resources per capita, 2013. A country’s freshwater resources are comprised of its river flows and groundwater derived from precipitation, both of which are subject to change over time.
Source: World Bank

To measure the impact of water resources on the industrial mix in each country, the author develops a measure of "water intensity" intended to capture the ratio of water costs to total value added in each industry. Data collected in the United States show that water intensity varies significantly by industry: sugarcane farming and stone quarrying rank near the top, while the manufacture of medical equipment uses almost no water as a percentage of value.

If global markets are using water as a source of comparative advantage, then each country’s exports will reflect local water availability. Water-rich countries like Russia and Brazil will be more likely to concentrate in water-intensive sectors like agriculture and mining, while water-poor economies in Africa, Europe, and western Asia will tend to import these goods and focus their exports in other industries.

Debaere feeds this data into a model of national exports, which seeks to explain the export mix in each country based on the amount of water, capital, land, and skilled labor available. As expected, countries with greater water resources export more water-intensive goods, but the relationship is much weaker than that for capital or skilled labor. A standard-deviation increase in water resources per capita is associated with only a 0.05 standard-deviation increase in exports.

The evidence suggests that water-scarce countries, at least to some extent, protect their scarce water resources by exporting less water-intensive goods that would tax their scarce resources even more.

These results should reassure us that changing water availability, while potentially disruptive in some countries, will not throw global trade into disarray. This is explained in part by the fact that water is generally so cheap that it only makes up 1-3% of a producer’s added value in most industries outside of agriculture; even a doubling or tripling of water prices does not significantly alter a producer’s profitability.

However, Debaere cautions that the relationship between water and trade may strengthen in the future. At present, water prices in water-poor countries are kept artificially low, either because water is freely available in rivers and lakes, or because governments explicitly or implicitly subsidize water for consumers and businesses. If water scarcity deepens, governments may start to reconsider these policies and trade may become more sensitive to local freshwater resources.

Even these lower estimates show the potential for climate change to alter trading patterns. Debaere notes that the Australian government recently predicted a 10% nationwide decrease in precipitation by 2030. The model predicts that if Australia’s water resources shrink by 10%, its export trade would drop by about 5% or $15 billion, creating a small but meaningful dent in the Australian economy, especially its agricultural and resource extraction sectors. As governments consider changes to water policy in coming years, they will be considering the potential for these kinds of disruptive effects. ♦

"The Global Economics of Water: Is Water a Source of Comparative Advantage?" appears in the April 2014 issue of the American Economic Journal: Applied Economics.