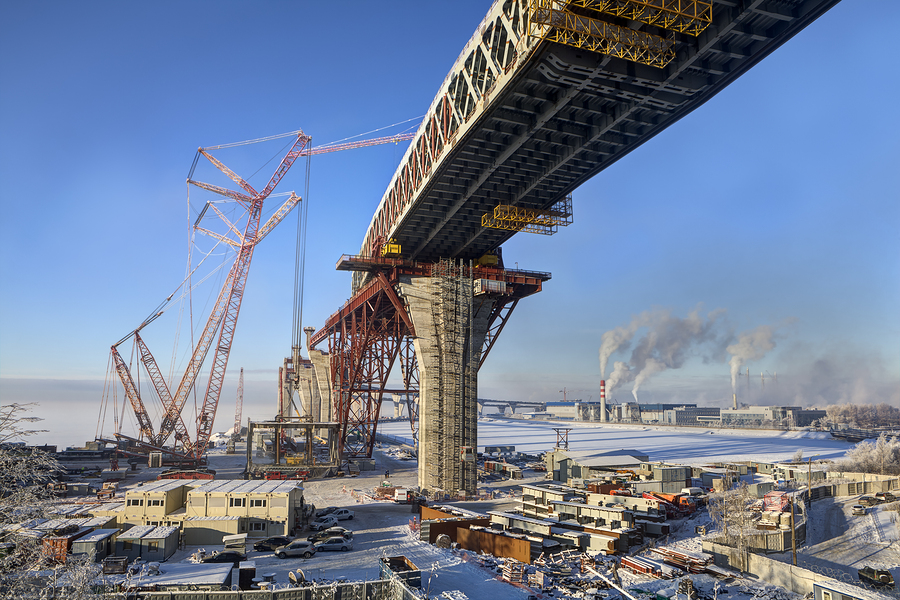 A new highway bridge under construction over a canal in Saint Petersburg, Russia, January 23, 2016.

Corruption has a pretty bad reputation, but a theory going back to the 1960s says that corruption can sometimes serve as a necessary grease in the gears of a bureaucratic government.

To be sure, corruption can deter investment and redirect resources from vulnerable populations to wealthy oligarchs. But it can also allow nimble firms to cut through red tape or bypass pointless regulations. If certain profitable activities are restricted by law, a well-placed bribe can enrich companies and provide necessary goods and services to the public.

Graft may also provide a substitute source of government revenues when the tax base can’t adequately fund the government. A corrupt traffic guard who requires motorists to pay bribes to cross a bridge has incentive to make sure the bridge is functional and well-maintained, and probably has the funds to make it happen. Sometimes, this type of arrangement can result in better and more reliable public services than an underfunded but honest government.

Corruption is never ideal – of course it is always better to have well-functioning public institutions and smart regulations in the first place. But when outdated laws or sclerotic bureaucracies are impeding progress, a little corruption can be a good short-term solution – at least according to the “efficient grease” theory.

Naturally, the typical mechanics of corruption like money laundering and bribery are hidden and hard for researchers to observe and understand. A study appearing in the current issue of the American Economic Journal: Economic Policy uses financial transactions data leaked from the Central Bank of Russia in 2005 to find evidence of corruption in municipal governments and test the “efficient grease” hypothesis.

In Corruption in Procurement and the Political Cycle in Tunneling: Evidence from Financial Transactions Data (PDF), authors Maxim Mironov and Ekaterina Zhuravskaya argue that they can create a measure of corruption by looking for evidence of suspicious transactions by Russian firms in the leaked bank data, and then seeing whether the shady firms tend to get more government contracts. By comparing regions of Russia that are more or less corrupt, they can see if corruption helps make governments operate more efficiently.

The researchers analyze the leaked dataset of over 500 million bank transactions between hundreds of thousands of Russian companies and identify a subset of 99,925 companies with some suspicious characteristics. These “fly-by-night firms” as the authors call them received more money from other companies than they paid out, but paid little or no taxes to the Russian government, and didn’t pay the requisite social security tax that would be required for even one employee at minimum wage.

Many of the payments these suspicious firms receive are ostensibly for “consulting services.” But the authors’ research shows that many of them exist to allow legitimate firms to remove funds from their official balance sheets and then use those funds for nefarious purposes, a practice known as tunneling. The authors can’t tell what happens to the money after it is tunneled out of the legitimate firms’ bank accounts (which is exactly the point) but they infer that funds transferred to tax evader firms will ultimately be used for corruption.

In Russia, suspicious cash transfers spike after elections
Rates of "tunnelling" (bank transfers from legitimate firms to suspicious firms) for Russian companies that provide procurement services to local governments and firms that receive little or no revenue from such services, 1999–2004. Tunneling at firms that work closely with local governments rises in the months before regional elections and spikes during the month after elections (highlighted in red) when many procurement contracts are typically signed.
Source: adapted from Figure 2 of Mironov & Zhuravskaya (2016), author calculations based on leaked data from the Central Bank of Russia

To test their theory about the link between tunneled cash and corruption, the authors track how tunneling activity moves with local elections. It turns out that tunneling patterns are different for firms that earn more than 1% of their revenue from procurement contracts with local governments (these contracts can range from office supplies for city hall to major road maintenance and infrastructure projects). Sure enough, firms that do a lot of business with local governments increase tunneling activity in the runup to local elections and do the most tunneling in the month immediately following election day.

Why is this happening? The authors cite the example of Inteko, a firm owned by Yelena Baturina that made millions off procurement contracts from the city of Moscow during the period when Baturina’s husband was the mayor. Inteko made major transfers to suspicious firms in the weeks before the Moscow mayoral election in December 2003.

The authors note that much of campaign financing in Russia comes from illegal, under-the-table contributions, and that many procurement contracts are determined immediately after new officials come to power and set up their new budgets. This could explain why firms angling for government contracts tend to increase tunneling activity around election time.

The authors calculate a corruption index for each region by determining the correspondence between tunneling payments after an election and the allocation of government contracts. A region where the biggest tunneling firms end up with the lion’s share of government contracts probably has a culture of corruption. A region where tunneling activity is uncorrelated with government procurement revenues suggests that, even if firms there may be doing something suspicious, they do not seem to be unduly influencing public officials with the tunneled cash.

The authors’ index matches up well with regional corruption rankings provided by Transparency International, a group that uses interviews with residents and experts to gauge perceptions of corruption in different parts of the world. The corruption rankings are only available at the regional level and only then for some regions of Russia, underscoring the advantages of the authors’ approach. Their index is based on hard data in the financial transactions database rather than surveys or perceptions, and can be extended to cover all regions and calculated even down to the municipal level.

The final step is to see whether municipalities with more evidence of corruption actually function better than other localities nearby. Differences in economic and cultural conditions across different parts of Russia may be too great to allow for meaningful comparisons, so the authors compare the most and least corrupt municipalities within the same region. They calculate corruption indices for 246 localities across Russia, finding statistical evidence linking tunneling to government contracts in 26% of those localities.

On average across Russia, firms that win municipal government procurement contracts are slightly less efficient in terms of revenue per employee than firms that don’t supply the government. This suggests room for improvement in the decision-making progress and a possible opening for corruption in procurement to serve as an efficient grease for Russia’s city governments. But the evidence suggests this is not the case -- the problem is actually worse in the most corrupt municipalities. The efficiency gap between winning firms and losing firms in those municipalities is almost twice as big.

This suggests city officials are not hiring the best companies for their projects in these areas. Whatever process is determining the allocation of government contracts in these cities, it seems to have worse results for the public than whatever they are doing in cities not showing signs of corruption.

As the authors point out, there does not seem to be much of an overlap between the skills it takes to navigate the municipal bureaucracy to one’s advantage and the skills to run a procurement company efficiently. The localities where tunneled cash seems to translate most directly into government contracts do not see the most efficient companies coming to the fore and winning the contracts away from less-efficient competitors.

This result doesn’t rule out the possibility of beneficial corruption in certain situations, but it does provide some systematic evidence that the more corrupt corners of the Russian Federation are spending funds less wisely, and that residents there are getting less value for their municipal tax dollars. This could temper some of the enthusiasm for the counterintuitive efficient grease hypothesis that has been building in the economics literature. ♦

“Corruption in Procurement and the Political Cycle in Tunneling: Evidence from Financial Transactions Data” appears in the May 2016 issue of the American Economic Journal: Economic Policy.

Should we use subsidies to correct inattentive consumers?

Measuring attentional bias in the market for light bulbs