Can American agriculture adapt to a hotter climate? 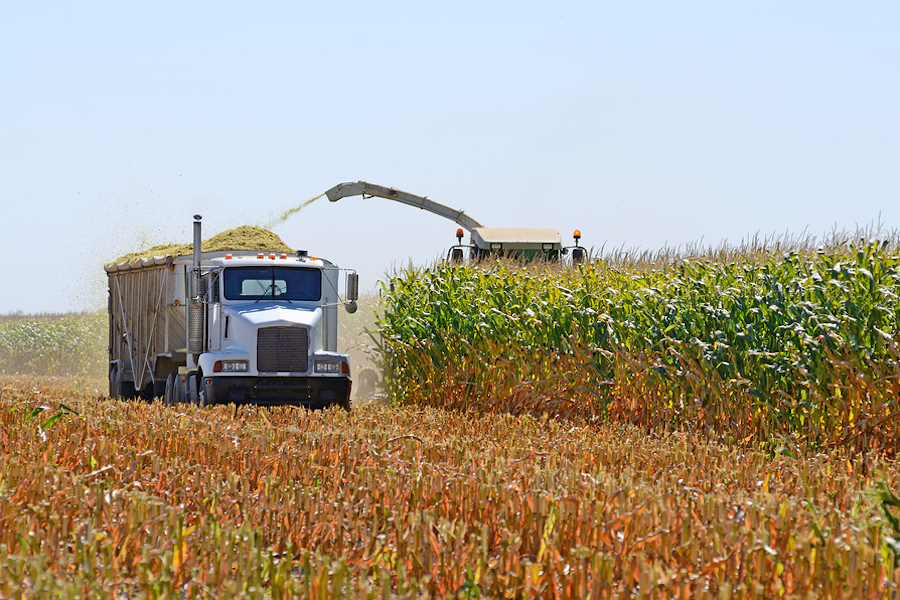 Combine harvester cutting across a cornfield. More than 90 million acres in the U.S. are devoted to corn production (an area roughly the size of the state of Montana).

There is lots of uncertainty about how damaging climate change is going to be. We don’t know whether we will manage to limit global temperature increases to 2 degrees celsius or not, and climate models disagree on what and where the impact will be even if we do.

Yet another big source of uncertainty is the question of adaptation, especially in the agricultural sector. The stakes are high because some projections say food prices could double, but the potential for growing crops in new locales and tweaking inputs to existing crops means that agriculture could find ways to thrive in a slightly hotter world. A new study in the current issue of the American Economic Journal: Economic Policy looks to see how well American farmers have adapted to temperature changes over recent decades.

In Adaptation to Climate Change: Evidence from U.S. Agriculture (PDF), authors Marshall Burke and Kyle Emerick use archival weather data to track how the climate during the growing season changed in each county in the eastern U.S. between 1980 and 2000. They find a wide variation across different parts of the country, with some counties warming by more than 2ºF and some actually cooling by half a degree.

These changes may not sound like much, but the average county saw an astounding increase relative to the previous two decades. In the counties that warmed the most, the pace of warming was on par with the average projected warming for the eastern U.S. by 2030 according to climate models – a pace very unlikely to keep overall warming below 2ºC (3.6ºF). In essence, some counties got a preview of coming climate change during these decades, while other counties saw little change.

Most U.S. counties got warmer during the '80s and '90s
Change in average temperature during the growing season (April–September) across 2,600 counties in the Eastern U.S., 1980–2000. Even within a state, there can be substantial differences in how the climate changed over these two decades. The top four corn-growing states are highlighted. 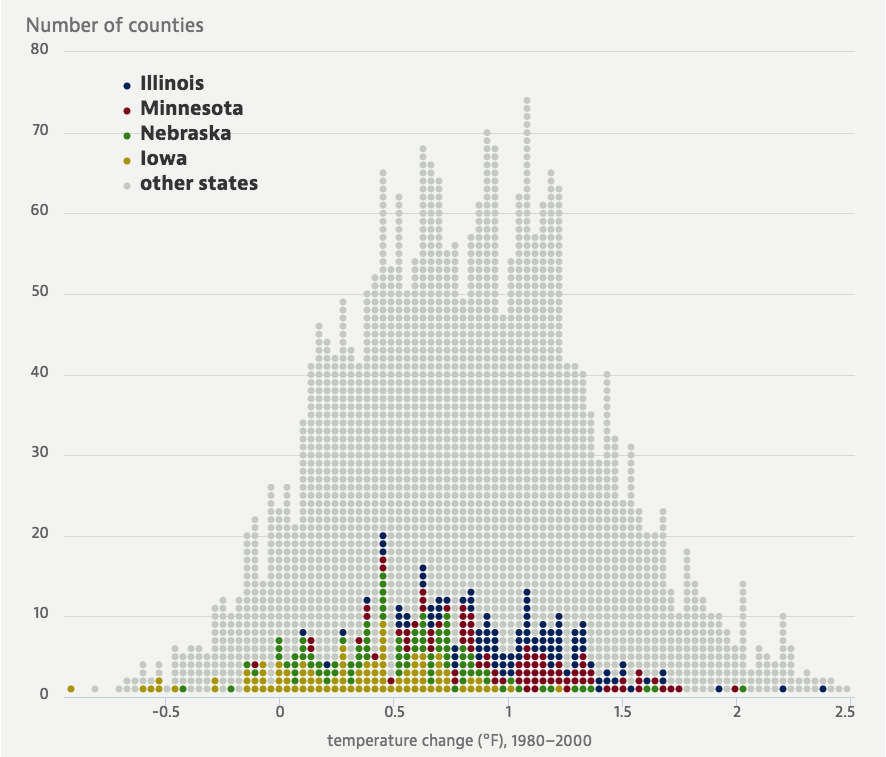 It’s true that activity on the ground can lead to changes in the local climate – expansion of irrigation systems seems to cause local cooling, for example. But the bulk of evidence from the physical sciences indicates that these changes are probably due to natural fluctuations in ocean temperatures and air currents over North America, with complicated knock-on effects that can impact nearby counties differently.

The authors highlight the case of Lee and Mahaska counties in Iowa. The two are only 80 miles apart, but Lee County saw an increase of just under 1ºF during the ‘80s and ‘90s, while Mahaska County cooled by half a degree. The patchwork of climate impacts in counties across the country create a natural experiment to see how easy it was for farmers to adapt in the states with the most adverse weather changes.

As a baseline, the authors look at how year-to-year variation in weather (which is much more volatile than longer term trends in the climate) affects corn production per acre. Warmer temperatures are generally better for corn cultivation up until a threshold around 84ºF – after that, each hour the crop spends under the sun at a temperature above that threshold has a stunting effect. Similarly, there is a happy medium for seasonal precipitation levels (around 17-20 inches in the data) that is best for growth.

By comparing corn yields in years with more and fewer periods of intense heat and different levels of precipitation, the authors calculate that every additional 24 hours of exposure to heat above 84ºF in a county reduces corn yields by 0.56%. A couple weeks of hot weather in the middle of summer can easily reduce the corn crop by 5%.

These losses are somewhat unavoidable because the weather changes from year to year, and farmers can’t anticipate what sort of summer they will have with perfect accuracy. But if the climate is changing significantly over a period of decades, there might be things they can do to adapt, ranging from small changes in runoff management or fertilizer levels to bigger investments like new irrigation systems or a shift to a different variety of corn that is more heat-resistant.

The authors’ hypothesis is that farmers in counties that experienced bigger temperature increases between 1980 and 2000 would have taken some steps to adapt. If they succeeded, they won’t be paying the full penalty for extra days of extreme heat, and there won’t be as strong a connection between heat and wilting corn yields in the data when focusing on just the long-run difference between 1980 and 2000.

Nevertheless, the authors find that the effect of 24 hours of hot weather is still quite damaging, reducing yields by 0.44% over the long term instead of 0.56%, an improvement of barely 20% and one that is not statistically significant. Even in the places where farmers have had time to get used to hotter temperatures, they don’t seem to have gotten much better at ameliorating the damaging effects of intense heat. The authors look at soybean yields using the same methodology and find a slightly better 32% improvement, but that is statistically insignificant as well.

So it doesn’t seem like corn and soybean farmers are adapting too well to climate change, but this may not tell the whole story if part of the adaptation involves switching to different crops or out of agriculture and into another line of work.

Our median estimate is that corn yields will be about 15 percent lower by mid-century relative to a world without climate change . . . . We note that a 15 percent yield loss is on par with the estimated 15– 25 percent productivity losses resulting from the well-publicized “extreme” drought and heat wave that struck the US midwest in the summer of 2012.

The authors rerun the analysis using total crop revenues across the county as their outcome instead of crop yields. If farmers advantageously switched to more profitable crops at just the right time, revenues might have been more resistant to extreme heat than yields within an individual crop were. That doesn’t seem to be the case in the data, and a test of whether population is decreasing faster or farmland cultivated is falling in the most heat-stricken counties was inconclusive.

These results don’t seem too promising for the notion that the agricultural sector will transition gracefully as the climate warms. The authors’ data takes the bird’s eye view of each county, so they aren’t able to see what specific steps farms are or aren’t taking to adapt to warming temperatures. One hypothesis is that farmers were slow to realize the changes that were happening and will adapt more fully over time as trends become clear, but it’s also possible that there simply aren’t that many good adjustment options for farmers whose crops are increasingly getting blasted with extremely hot days.

The authors estimate that, given the current low rate of adaptive response and projected rates of warming, corn yields across the eastern U.S. will be about 15% lower by 2050. That’s at the low end of estimates of the damage of the major drought that struck the midwest in 2012. That means drought-like conditions may be the new normal for corn and soybean farmers in the region if they aren’t able to find better ways to adapt. ♦

“Adaptation to Climate Change: Evidence from U.S. Agriculture” appears in the August 2016 issue of the American Economic Journal: Economic Policy.