The AEA interviews Thiemo Fetzer about how austerity policies after the financial crisis led to Brexit. 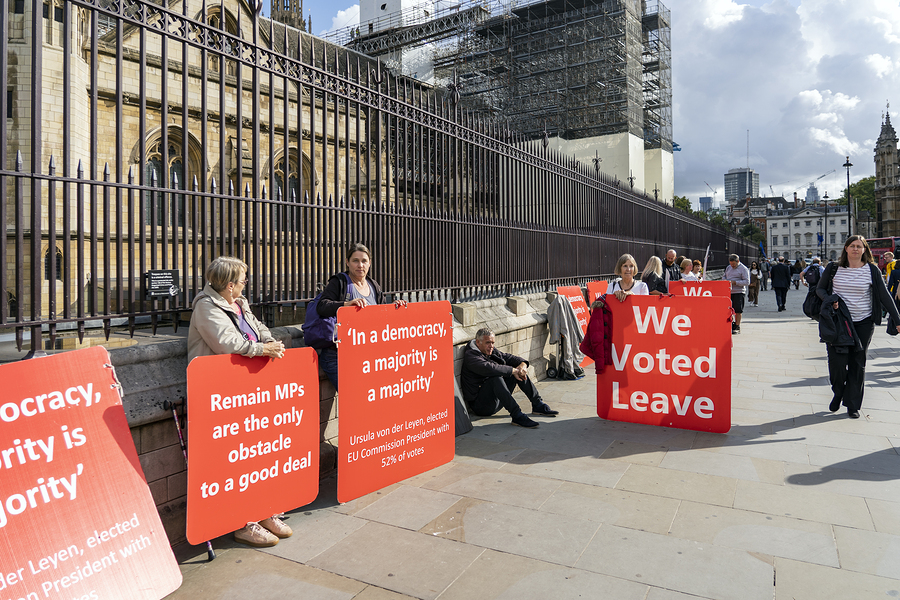 A group of pro-Leave protesters rally in London in October 2019.

Next month, Britain will go back to the polls to elect a new Parliament that, potentially, will agree on a Brexit plan.

It’s been a contentious few years since the shocking referendum vote to leave the European Union. Even once the UK government decides how it will leave, the worst may be yet to come.

But how did we get here? What caused the populist revolt that continues to divide the UK?

Thiemo Fetzer takes a look at one specific set of reforms that may have played a decisive role in the referendum vote. In the American Economic Review, Fetzer says that austerity-induced cutbacks since 2010 are important to understanding why the "Leave" side won.

Fetzer spoke with the AEA about austerity in the UK, how it fed support for populist movements like the UK Independence Party, the potential fallout from cuts to social support programs, and the upcoming Parliamentary elections on December 12.

An edited transcript is below and the full-length audio interview can be heard using the media player below.

AEA: I'd like to talk specifically about what was happening in 2010 with austerity. What kinds of cuts were made to UK welfare programs and who was most affected?

Fetzer: There were three main elements to austerity. One was essentially a lot of cuts to everybody working in the public sector, so that wages would not grow with inflation as they used to in the past. The second element was comprehensive reform to the welfare system, which affected mostly people . . . who were actually employed in low-paying jobs and who would receive a top-up from the state through what is called tax credit. Financially, that was an important part of austerity, whereby these kinds of wage top-ups were withdrawn at a faster rate.

There's a third element to austerity which entailed significant cuts to local government finance and local government funding, which is used to pay for basic services, maintenance of local roads and these types of things that was also quite dramatically cut by I think 50 percent in real terms, which was quite dramatic. And last but not least, there were significant cuts in spending in things like education, which in real terms declined by 20 percent.

AEA: So how did you go about connecting those welfare cuts with how the most affected people voted on Brexit?

Fetzer: There's two parts to the analysis. One of them is essentially just geographic-based on voting outcomes at the district level in European elections . . . and the other set of elections I look at are Westminster (Parliamentary) elections. And within these elections, I study the electoral performance of the one political party in the UK (United Kingdom Independence Party) that advocated consistently on a platform of the UK leaving the European Union over the whole sample period of 2000 to 2015.

AEA: How significantly did you determine that these welfare cuts that austerity policies drove support for Brexit?

Fetzer: What is quite remarkable is that post-2010, the structure of who was supporting UKIP changed a lot. UKIP won about 16 percent of the popular vote in European elections in 2004 and 2009, so it was not a negligible electoral force. But in 2014, there was a massive surge in support for UKIP. And a lot of that support for UKIP can essentially be attributed to regional or individual exposure to welfare cuts. You see that support for UKIP increases in areas most exposed to austerity by about 5 to 6 percentage points.

AEA: There are some members of Parliament who initially voted in favor of these welfare benefit reductions, but also voted years later to remain in the EU. Many of them, if not all, couldn't have predicted Brexit. What would you like them to take away from this, about the consequences of their stances on certain policies that may have outcomes they couldn't possibly predict?

Fetzer: In the grand scheme of things, you can think about Brexit as just a sequence of a lot of policy failures and potential accidents, partly facilitated by institutions like the UK's electoral system. In 2015, nobody expected the Conservative party to win an outright majority. It was the fact that they won an outright majority that forced a referendum to be called. Obviously in 2010, the country was coming out of a financial crisis. Deficits had spiraled up, and at some level, it was clear that some things had to be done to rein in public spending. The 2010 coalition government probably did that reining in of spending in ways that were quite deeply corrosive to social cohesion and to the implicit social contract.

Austerity was imposed . . . and implied that it was single mothers, disabled people, and the working-age adult population who have to cough up the funds to pay for gross misconduct in the financial service sector. All of these narratives were right there. I think with the 2010 austerity package there was not even an attempt to frame this as a common social purpose.

AEA: What do you think is going to happen next month and with the ultimate fate of Brexit?

Fetzer: The general election is a very bad way of confirming any public sentiment toward the version of Brexit that sees a dramatic severance of ties between the UK and EU, that actually nobody advocated for or even campaigned for in 2016. What this election might do is offer a victory for the Conservatives on the backs of maybe 35 percent of the popular vote. This is no democratic mandate to implement (a Brexit plan), and it won't resolve the democratic and institutional crisis that is simmering.

My best hope for this election is to produce exactly what the previous election has produced —another hung Parliament—so that politicians will be put into the same position to actually solve the underlying problem. On some level, the most pragmatic thing would be to come to a compromise solution between those 48 percent (of “Remain” voters) and the 52 percent (who voted “Leave”), which is closer to what was actually promised to the voters in 2016. This would be my most ideal outcome.

"Did Austerity Cause Brexit?" appears in the November issue of the American Economic Review. Music in the audio interview is by Podington Bear.

Why do 100 million Americans give interest-free loans to the government each year?

The mysterious prevalence of tax refunds