"The curse of bigness"

The AEA interviews Naomi Lamoreaux about the history of Americans' response to dominant companies. 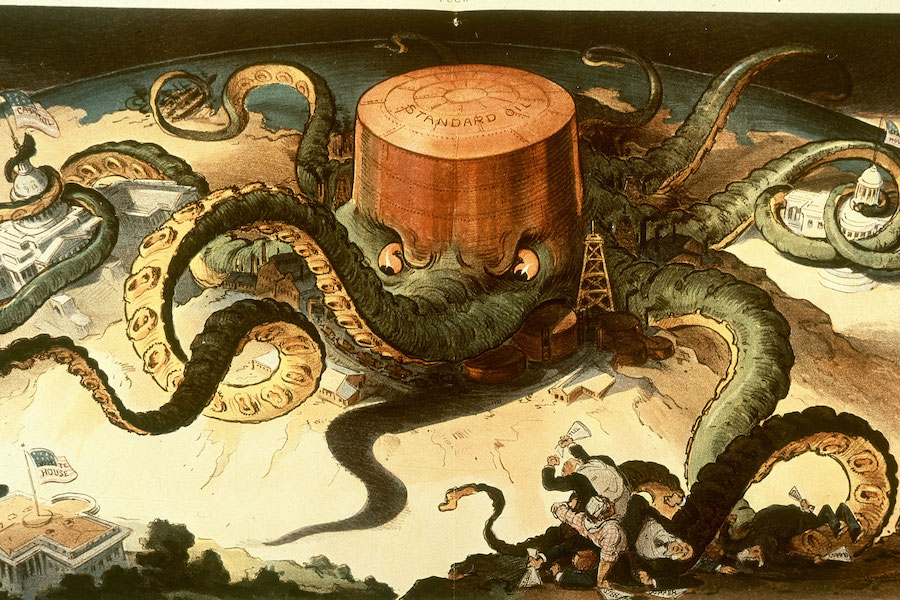 A political cartoon from 1904 shows a Standard Oil tank as an octopus with many tentacles wrapped around the steel, copper, and shipping industries, as well as a state house, the U.S. Capitol, and one tentacle reaching for the White House.

A new Gilded Age is upon us.

Tech titans like Amazon, Google, Facebook, and Apple dominate their respective markets and are growing increasingly powerful. Now, a chorus of critics is calling for them to be dismantled.

We’ve been here before. More than a century ago, it was Standard Oil who was coming under fire for anti-competitive practices. Then it was the meat packing industry, metal production, and telecommunications. Each phase presented unique questions about how to treat powerful corporations.

Lamoreaux’s paper in the Summer issue of the Journal of Economic Perspectives lays out how our thinking of the “problem of bigness” has evolved since the late 19th century. She spoke with the AEA about various corporate antitrust cases, the tension between the Chicago School theorists and the “New Brandeisians,” and the challenges of trying to encourage innovation without giving firms too much power over our democracy.

A transcript edited for length and clarity is below. A longer audio version of the interview can be heard by clicking on the media player.

AEA: What lessons do you think the experience with companies like Standard Oil have to offer us today?

AEA: Can you briefly describe what Standard Oil was and it's dominance in energy markets?

Lamoreaux: Standard Oil was a refiner of crude petroleum. Initially its main product was kerosene, which was used for lighting purposes. Later on, it became a producer of gasolene, but it's monopoly was initially one of lighting, of kerosene. ... Initially, it only had about 4 percent of the refinery capacity of the country. It went from 4 percent around 1870 to around 90 percent of refinery capacity by the end of the decade. And so, that scared people and set off alarm bells.

AEA: How did it get so big so quickly?

Lamoreaux: Basically, it was able to secure unfair advantages over competitors by means of railroad rebates. A good part of the price of oil was the costs of shipping the oil, and Standard was able to get lower shipping rates by railroads than its competitors and then use that advantage essentially to force competitors out of business or to sell out to it.

AEA: When did regulators begin to step in with Standard Oil?

Congress faced pressure to take action, so it passed a law in 1890 called the Sherman Antitrust Act, which is the first federal antitrust act which made it a crime to attempt to monopolize commerce or engage in the restraint of trade activities. The problem with that law was that it was much more difficult to apply it to state chartered corporations. Companies like Standard took out charters from friendly states like New Jersey. Standard might be a monopoly, but it was operating under a New Jersey charter and, according to New Jersey law, it was a legal enterprise. That posed problems for federal regulators. It took until 1911 for federal regulators to figure out how to proceed against a company like Standard. At that point, the Supreme Court in two decisions — one involving the Standard Oil Company and the other the American Tobacco Company — broke up those companies on the grounds that they were engaged in anticompetitive acts.

AEA: There's a thin line between business practices that are deemed anticompetitive and dangerous and those that enhance efficiency. Can you describe the evolution in the way that we think about what is dangerous and what is not?

Lamoreaux: There was a sense that these large firms that were emerging in many sectors of the economy . . . had done important things that lowered the cost of goods to consumers, that improved efficiency, that brought new goods to consumers. They were large and successful and because they were successful they had market power. People wanted to find ways of distinguishing between those firms and firms that got large by gobbling up their competitors as a result of unfair advantages. The problem is that firms don't really sort themselves neatly into those categories. The most efficient, most innovative companies can do things that are designed to block future competition. They can engage in practices that we regard as unfair and anticompetitive.

Over the course of the 20th century then, policymakers tried first to distinguish those kinds of behaviors and just put a stop to the bad behaviors. But then in the late 1930s, they decided that you really couldn't do that. Bigness itself was bad and they just pursued policies that were aimed to reduce the market share of large firms whether they had behaved badly or not. And that view of what antitrust policy should do really started in the late 1930s and persisted into the early ‘70s. Then we swung to the opposite side and decided that bigness was not a problem as long as firms deliver benefits to consumers and so we weren't going to worry about it at all. And now people are beginning to rethink this again.

AEA: What you're referring to is this tension between the Chicago School and the so-called New Brandeisians. Can you explain the conflicting arguments between those two sides?

Lamoreaux: The Chicago School position was that size should not be a problem if size was the product of superior efficiency. My old colleague Harold Demsetz argued that large firms often had market power because they were really successful and you didn't want to punish that. So basically size wasn't considered a problem at all and as long as firms were not doing things that harmed consumers, restricting output, conspiring to keep prices high, there was no problem with size.

The New Brandeisians think very differently. They call themselves the New Brandeisians because their view of the world is much more similar to that of Louis Brandeis where they see large firms posing threats in many different ways. While they might bring some benefits to consumers in the short run, in the long run they may choke off innovation. They may protect their positions by lobbying to prevent Congress or other authorities from taking actions that might undermine their powers. And of course people worry about a lot of other things that have to do with bigness that really are not related to antitrust policy but are social concerns like control of information.

AEA: What is the most critical question or thread that you think history has to offer the current moment?

Lamoreaux: I guess I would say two things. One is that concerns about bigness are always multifaceted and cannot be reduced to a simple dimension of whether consumers in a comparative static sense are harmed. The second point is that trying to decide whether a large firm is doing damage or not, behaving badly or not, is actually a really difficult question. Because it's so difficult, we've found it a hard line to draw and have, as a result, thrown up our hands and said we're not going to draw the line.

It's an illusion to think that there is some single principle that will allow us to escape those kind of judgement calls. And the judgement calls will always be flawed. It's part of the nature of the political systems. It's part of the nature of regulatory system. They always involve judgement. And we're always going to err on one side or the other. But that's where we have to put our effort: getting it right. We'll never get it right, but we have to keep trying.

"The Problem of Bigness: From Standard Oil to Google" appears in the Summer issue of the Journal of Economic Perspectives. Music in the audio is by Podington Bear.

Born to be big

How do aggregate conditions when a startup launches influence its growth potential?

What types of training are most effective at helping microenterprises grow?