Did cell phone technology in Afghanistan help reduce ballot stuffing at the polls? 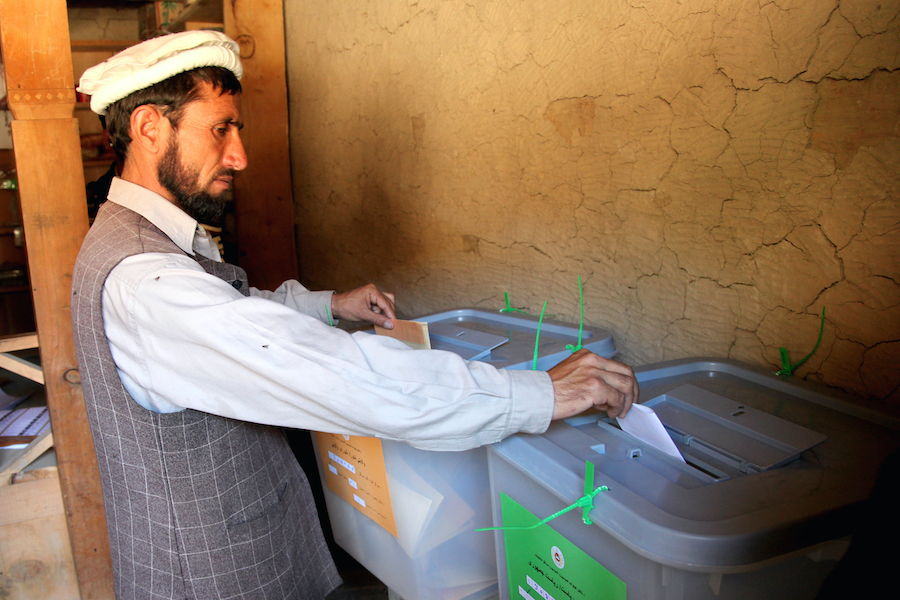 An Afghan elder places his ballot into a ballot box during the heavily anticipated Afghanistan elections in 2009.

Eight years after the Taliban was toppled, Afghanistan’s fledgling democracy was still facing major questions about the legitimacy of its government.

Widespread fraud allegations during the 2004 presidential election led to the creation of an independent watchdog, the Electoral Complaints Commission (ECC). But political violence and fears of retribution against whistleblowers cast doubts over whether this commission could effectively reduce fraud.

A paper in the American Economic Journal: Applied Economics finds that mobile phone technology played an important role in helping the ECC identify and address polling irregularities in the second presidential election, which took place in 2009.

Gonzalez’s findings highlight how communication infrastructure can help improve election oversight even with the threat of violence at the polls, including lessons for established democracies like the United States.

The paper builds on the literature about the role that information–communication technologies play in social monitoring and economic development.

Gonzalez had to find a way of identifying the impact of mobile technology on fraud, while separating out other impacts of cell coverage, such as insurgents' use of phones to coordinate attacks at the polls.

Deterring election fraud
The figure below shows the effect that cell phone coverage had on election fraud. The negative "distances to boundary" on the left of each panel are areas outside the coverage area and positive distances are areas with coverage. Hollow dots are the average share of fraudulent votes for polling centers falling within 2,000-meter bins, and solid dots are 4,000-meter bins. The likelihood of a polling center reporting fraud drops by 5 percentage points (Panel A) while the average share of fraudulent votes drops by 2.5 percentage points (Panel B).

He collected data on polling center activity and insurgent attacks and overlaid them with cell phone coverage maps. Then, using a technique known as a spatial regression discontinuity, he compared activity at polling centers that were on either side of the border of the coverage areas.

To identify fraud, Gonzalez looked at polling centers where voter turnout and the share of ballots cast for a single candidate were suspiciously high.

Each polling center has several stations where citizens can cast their ballots, and each station has 600 empty ballots that can be cast. Gonzalez examined stations where there were 600 or more votes cast and where one candidate received more than 95 percent of the votes—these two measures combined suggest strong evidence of ballot stuffing.

By this proxy measure, he discovered meaningful differences between polling centers that were just inside cell phone coverage areas and those on the other side of the boundary.

The share of fraudulent votes at polling centers that were just inside coverage areas dropped by about 4 percent, while the likelihood of a fraudulent station within a center went down by about 8 percent.

Importantly, there was no difference in political violence across coverage areas, suggesting that phone coverage driving violence at the polls was not influencing the results. Nor did the cell phone coverage correspond to areas dominated by a single ethnic group that could explain the overwhelming share of ballots cast for a single candidate.

“The main channel here seems to be the ability for people to report complaints,” Gonzalez said.

Cell phone access allows citizens to report complaints anonymously rather than have to physically report to an ECC station and potentially face retaliation from corrupt officials.

The main channel here seems to be the ability for people to report complaints.

But just as important was the legitimacy of the ECC itself. Without public trust that the commission would follow up on complaints, there would have been little incentive to report fraud, and cell coverage likely wouldn’t have had an impact.

Fortunately, the ECC does appear to have some legitimacy in Afghanistan, likely due to its independence from the Afghan government. At the time of the election, three of the five commissioners, including the chairman, were international experts appointed by the United Nations, and the other two included an Afghan Supreme Court justice and an official from a Non-Governmental Organization (NGO).

This is where there are lessons for advanced democracies like the United States. Deterring election fraud does not come down to technology alone. It must be coupled with trust in the institutions that provide oversight.

“The condition here, which holds for the US, is that we have to consider that the success of the technology in deterring fraud is intrinsically linked to the existence of some credible institution that can actually act on the complaints,” Gonzalez said.