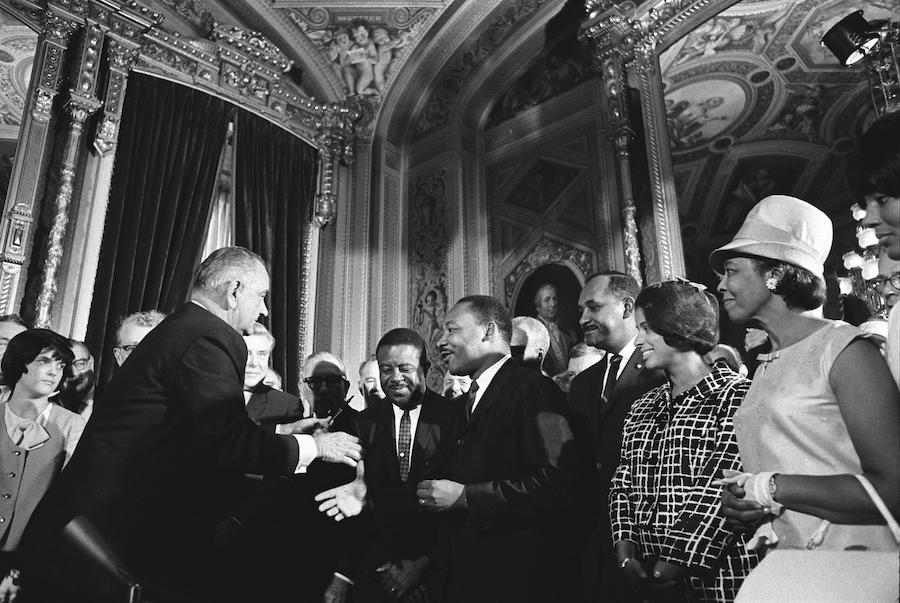 President Lyndon B. Johnson meets with Martin Luther King, Jr., at the signing of the Voting Rights act of 1965.

Six years ago, the Supreme Court decided that the country no longer needed to take certain “extraordinary measures” to prevent racist voter suppression laws from going into effect.

“Our country has changed,” Chief Justice John G. Roberts Jr. wrote for the majority in Shelby County v. Holder. “While any racial discrimination in voting is too much, Congress must ensure that the legislation it passes to remedy that problem speaks to current conditions.”

The 5-4 decision struck down a key provision of the Voting Rights Act of 1965 known as “preclearance,” which required some municipalities—mostly in the South—to get federal approval for any changes to voting laws.

In the July issue of the American Economic Journal: Applied Economics, Desmond Ang provides the first estimates of the effects that preclearance oversight had on voting. He found that the provision increased voter turnout by 4-8 percentage points, all due to increased minority participation. And yet, there were some surprising effects on the balance of political power.

The AEA spoke with Ang about why he was interested in this lesser known part of the Voting Rights Act, what he discovered about the long-term effects of federal oversight, and how his research can inform larger legal and policy questions around this issue. A transcript of that conversation, edited for length and clarity, is below and a longer audio interview can be heard using the media player below.

Desmond Ang: I started this project back in grad school in 2014 shortly after the Shelby decision. At the time there was a lot of talk in the media about how there might have been all these adverse implications for turnout, specifically minority turnout, as a result of this decision. And I felt it was fascinating because this was essentially a silent provision. This was a part of the Voting Rights Act that I and a lot of other people I think hadn't really heard of. Typically, people think of the Voting Rights Act and they think of bans on literacy tests, etc., these really salient restrictive obstacles for people to vote. And this preclearance thing was actually much more invisible.

AEA: Describe what preclearances do and what kinds of laws they're aimed at addressing.

Ang: The Voting Rights Act actually had a few different parts to it. There was the part that struck down literacy tests, which I think people are familiar with. There's the part that outright prohibited discrimination in voting. And then there's the part of the Voting Rights Act called Section 5, which established something called preclearance coverage, or federal oversight. For areas that were subject to federal oversight, from then onwards if they wanted to implement any new change to the voting laws, they would first have to obtain approval or preclearance from the government before they could put in these laws.

AEA: Can you give an example of specific laws that preclearance helped prevent from going into effect?

Ang: One specific example was a very strict voter identification law that Texas tried to implement back in the early 2010s. The federal government ruled that this was discriminatory and so that Texas couldn't implement it. However, after the Shelby ruling in which federal oversight was overturned, Texas went about and implemented this very same photo ID law within hours of that ruling.

AEA: What did you think that economics and the tools of economics had to contribute to this larger question of the effect that preclearances had?

Ang: I think the tools of economics at this point are very much empirical econometric tools and they can be applied to questions that you wouldn't necessarily associate with the economy, or at least the monetary economy. In this case, I thought there was a very important political economy question about what causes people to vote, what causes people not to vote, and that has downstream implications for the economy more generally.

AEA: Getting back to this question of these 40-year-old facts and whether they matter, what did you find?

Ang: I found that they mattered quite a bit. Areas that were subject to preclearance back in the 1970s, their voter turnout increased significantly as a result of their protections by 4 to 8 percentage points. And this was all due to increased minority turnout. Minorities were about 30 percent more likely to vote in 2012 because of these protections that were put into place in the 1970s and 1960s. What's surprising is that despite the fact that there were these huge increases in minority enfranchisement and minority participation in these areas, Democratic support actually dropped on net.

AEA: Which you wouldn't expect because, historically, minorities have voted Democratic and so if minorities are the people who are turning out more, you'd expect Democratic vote share to increase. But that's not what happened?

Ang: No. Share of votes that were cast for Democratic candidates dropped by 2-3 percentage points. I find that this is actually driven by backlash among racially conservative whites, which started voting Republican in large numbers. In a sense, that outweighed the gain in Democratic support that you would expect from this increased minority turnout.

AEA: Could you determine why preclearance was effective in boosting minority voter turnout?

Ang: It's difficult to capture the entirety of the types of laws that preclearance disallowed or prevented and those that it did allow. But one thing that we can look at is the implementation of at-large election laws. In the 1970s and 1960s, at-large election laws were thought to be one of the most prevalent ways in which counties would discriminate against minority voters.

AEA: What are at-large election laws?

AEA: An at-large system would basically dilute those minority votes by making it city-wide, so that the person who gets the most votes may not be from a predominantly minority area of the city.

Ang: Exactly. It's a form of voter dilution and it was historically one of the most controversial or divisive tools that localities would use to disenfranchise minority voters or dilute the power of minority votes. Looking at at-large election data, we find that cities that were subject to preclearance were significantly less likely to implement these at-large election rule changes. This is just one dimension on which preclearance may have helped bolster voter turnout.

AEA: What open questions are you interested in exploring regarding preclearance laws?

Ang: I think there is this open question about the fact that the arbiters of preclearance, the people who decided which rules went into effect and which rules couldn't go into effect, in some sense they easily could have been influenced by the political process as well. The attorney general is appointed by the president. You could imagine that he would bring in lawyers that would be favorable for certain types of election laws and not favorable for other types of election laws and you could imagine that there could be political differences in this process even though the whole point of the process could be to take political decisions or political biases out of election rulemaking. I think this is especially pertinent if we think about the application of preclearance or federal oversight to other sort of policy domains where there are also divisive political differences between Democrats and Republicans.

Do 40-Year-Old Facts Still Matter? Long-Run Effects of Federal Oversight under the Voting Rights Act appears in the July issue of the American Economic Journal: Applied Economics. Music in the audio is by Podington Bear. Subscribe to the monthly Research Highlight email digest here.