"Sand castles before the tide"

How can America's most expensive cities keep themselves affordable? 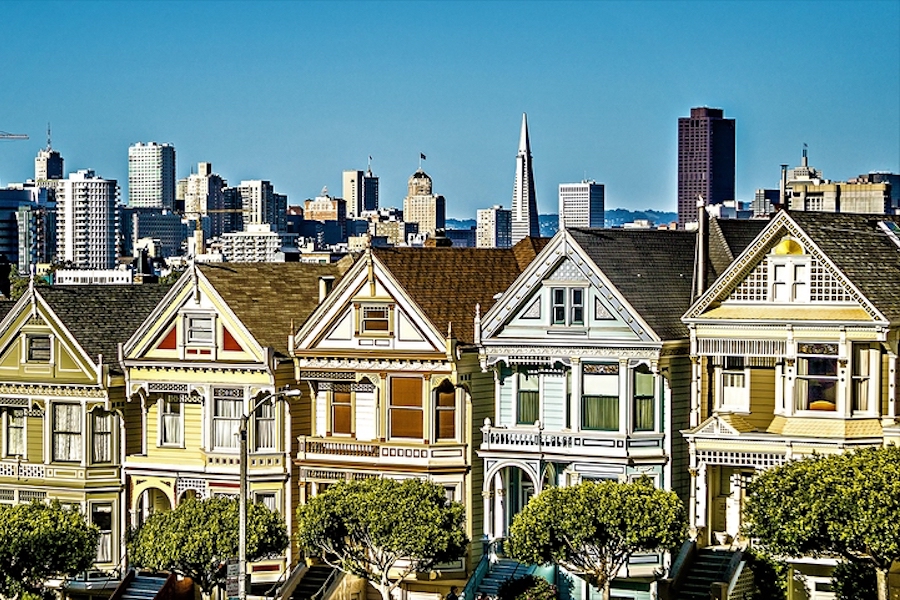 The "painted ladies" of San Francisco, one of America's most expensive housing markets.

A bunk bed in San Francisco was being offered to rent for $1,800 a month. One guy listed a tent in his parents’ backyard for $900 per month.

Housing prices in California’s Bay Area had risen so absurdly high that a Google engineer was living inside a moving truck to save on rent. The 23-year-old was simply sick of overpaying for a pad when he was never there.

“I don't know exactly when I had the idea to live in a van, or where I first read about people who had done it,” Brandon S. (he declined to give his last name) wrote on his blog. “What I do remember, distinctly, is finding out how outrageously expensive it was to live in the Bay area.”

The phrase “affordable housing” can seem like an ironic joke when applied to one of America’s most expensive places to live. But many cities — New York, Boston, Seattle, Denver, and San Diego, among others — are grappling with how to rein in housing markets where prices are only affordable to the financial elite.

The issue is of key concern for economists studying how to help low- and middle-income populations build wealth. Policies that encourage people to build emergency savings, buy health insurance, or invest in tax-deferred college plans for their children are irrelevant if people are putting all of their money toward rent or a mortgage payment.

“The high cost of housing and the refusal of high cost cities to expand their housing supply is effectively keeping people in economically struggling places from migrating to opportunity,”  said Gabriel Metcalf, president and CEO of the San Francisco-based housing advocacy group SPUR, who wrote an article about the issue for the winter Journal of Economic Perspectives. “It’s a huge problem from an economic productivity standpoint and also a social justice issue at the same time.”

The high cost of housing and the refusal of high cost cities to expand their housing supply is effectively keeping people in economically struggling places from migrating to opportunity.

In some ways, the cities are victims of their own success, having built up a thriving job market that has attracted so many workers that demand for housing has outstripped supply. But the lack of affordable housing options threatens to upend some of the very things that made them attractive places to live. It contributes to income inequality, straining infrastructure, and feeds urban sprawl as residents are forced to live further from their jobs at the urban core.

Despite efforts to address the problem — through regulations, social housing programs like Section 8, vouchers, and rent control programs — the problem is far more severe than any of these efforts can address, Metcalf said. He compared the affordable housing programs in these high-cost cities to “sand castles before the tide.”

It’s difficult for local elected officials to see the negative spillover effects of constraining housing supply when they are focused only on their own municipality.

“The US has made the decision to delegate land use issues to cities,” Metcalf said. “We may be coming to a point in time when we need to rethink that.”

The problem is most acute in California, where median home values have more than doubled since the mid-1990s in four cities — San Francisco, Los Angeles, San Diego, and San Bernardino. Home values have also spiked in East Coast cities like Boston (97 percent), Washington, DC (79 percent), and New York (75 percent), as well as Denver (92 percent) and Seattle (94).

Price Control
Cities that have experienced high price growth have taken a variety of approaches to provide affordable housing. Some have focused on publicly subsidized housing programs, such as Section 8, while others have put more effort into regulating rents. The map below shows the share of housing units in the largest American cities that receive subsidies and the share that are rent controlled, unregulated, and owner occupied. The size of the bubbles corresponds to the percent change in home prices since 2010, as measured by the Zillow Home Value Index.
Source: author data

Imbalances within these housing markets stem from a variety of factors, ranging from limited available land to overly restrictive housing codes that inhibit development of new units. Indeed, many of the things that shape housing markets are beyond the control of cities, such as the mix of employment opportunities and occupational structure of the economy, he says.

Cities have made earnest efforts to address the problems through social housing programs or rent control policies. But there is a larger issue at play; the undersupply of housing stems from a political system controlled by homeowners whose immediate interest is not to encourage development, but rather to preserve their neighborhoods and even restrict supply to increase the value of the land they already own.

Ironically, landlords often have the support of renters suffering the consequences.

Both renters and owners may oppose new housing development because the negative impacts are concentrated, while the benefits are diffuse, Metcalf said. The renter whose back patio will be shadowed by an apartment highrise may be more motivated to stop it from going forward, even if the additional housing supply might help stabilize rent prices over the coming years.

Metcalf said there needs to be a more fundamental and region-wide restructuring of the housing market in these urban areas to bring about meaningful change. And while the problem is dire, it is perhaps not hopeless.

Metcalf proposes seven changes to housing policy that cities could implement that may move them faster to a solution for their housing crisis. They include:

No single approach will suffice on its own, Metcalf said. What is required are “grand bargains” between regulators, policymakers, housing advocates, and the industry.

“The approach I think that has the most promise is to look for some grand bargains that solve multiple problems simultaneously and allow us to put together political coalitions that are strong enough to overcome the resistance,” he said.

“Sand castles before the tide? Affordable housing in expensive cities” appears in the winter issue of the Journal of Economic Perspectives.