Evidence from price trends on the New Orleans slave market 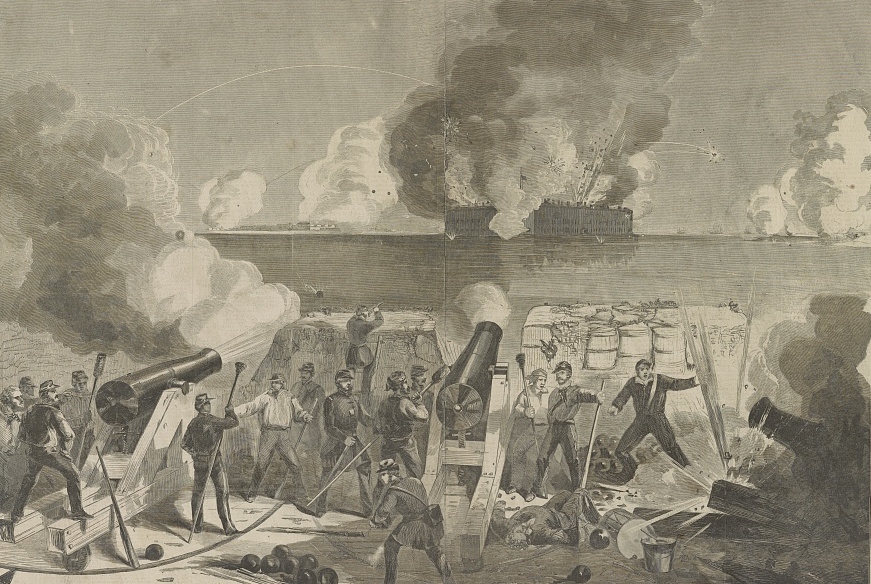 An illustration of the bombardment of Fort Sumter in April 1861 appearing in Harper's Weekly.

Historians generally concur that the American Civil War was fought over the issue of slavery, but the decision by southern states to secede from the Union remains a puzzle for historians and economists who study the period.

Newspaper articles and speeches from the period make clear that the conflict had philosophical and moral dimensions, but the cause of slavery was in large part an economic one – modern scholarship has emphasized the large fraction of Southern wealth that was embodied in slaves and the sheer economic might of the enslaved workforce. How would slave owners who wanted to maximize the value of their investment and find new markets in western states have viewed secession as a business proposition?

In Betting on Secession: Quantifying Political Events Surrounding Slavery and the Civil War(PDF), authors Charles Calomiris and Jonathan Pritchett argue that prices paid at the slave markets in New Orleans in the period around the beginning of the Civil War can augment traditional primary sources like newspaper editorials and political speeches in shaping our understanding of this period. They can help us understand whether slave owners feared defeat and the possible loss of their slaves or were supremely confident in Confederate victory.

If the goal of secession was preserving the slave system, what were slaveholders' expectations regarding the cost of the war and its possible outcome? Did they anticipate that Lincoln and the North would passively permit secession, or decide to fight? . . . How did the probability weights attached to these possibilities change in 1860 and 1861?

The records from slave sales are a valuable source for economic historians, but it is important to remember that these data come to us through tragedy. The New Orleans slave market was the largest in the South in the mid-1800s, operating out of squalid slave pens in the central business district (link contains some graphic descriptions). While most cities discreetly confined slave markets to a single building or street, the trade was everywhere in New Orleans, a major port city and focal point for slave traffickers who would bring bondsmen from across the South to market. About half of the sales split families apart, and many formerly enslaved people spent the decades after the war searching in vain for long-lost relatives through classified ads in regional newsletters.

As horrifying as this scene sounds to modern ears, these sales were considered to be as prosaic as real estate transactions under Louisiana law. Contemporary officials dutifully recorded and notarized all sales, leaving a paper trail that forms the basis for the authors' dataset. The authors collect data on over 16,000 slave sales between 1856 and 1861 to search for clues on how slave owners would have perceived the risks associated with secession.

The authors use the data preserved in these records to model how prices varied with characteristics of the person being sold. Enslaved people who were reported to have disabilities or who had no special skills often sold for less, while young men were in the most demand, with prices peaking around age 24 for men and declining thereafter. Healthy young slaves were prized by traders as well; oftentimes the very highest prices were paid for mothers sold along with their young children.

Taking these characteristics into account, the authors build a price index that captures trends in sales prices while adjusting for changes in the composition of slaves at the market over time (see figure below). The authors argue that this index can be used as a proxy for attitudes about the present and future value of the enslaved.

They find that the price index (which is calibrated to the price of a healthy 20-year-old unskilled man) fell in the wake of the Panic of 1857 to approximately $816, and then rose steadily up to a peak of $1,225 in the summer of 1860 just after Lincoln won the Republican presidential nomination. By the following August the war had begun in earnest and the index had fallen about 35% even though the newfound Confederacy had yet to lose a battle.

Prices on the New Orleans slave market, 1856–1861
Data on over 10,000 individual slave transactions in New Orleans in the years leading up to the Civil War. The authors construct a price index that accounts for the changing characteristics of the people sold at market over time. Because the data are so frequent, we can use the price index to gauge reactions to political developments like Lincoln's nomination or the Battle of Manassas in something close to real time.

Source: adapted from Figure 2 of Calomiris and Pritchett (2016) using records of the New Orleans Conveyance Office and author calculations

What can this bear market for slaves tell us about the perspective of slave-trading Southerners during these critical months?

Primary source evidence from the period tells us that the decision to secede followed a surprisingly nuanced debate about the costs and benefits of secession. There are at least two conceptually distinct reasons that prices could have fallen during this period: the natural disruptions of war that would have made any sort of capital less productive, and the potential for broad-scale emancipation of slaves without compensation for slave owners.

To disentangle the two, the authors analyze how prices varied with age. If slave owners foresaw a coming end to slavery, it would have dramatically affected their willingness to pay for enslaved children (whose productive years lay mostly in the future) and childbearing women relative to men in their prime who could provide labor immediately. The authors find no such pattern in the data though; the price declines in late 1860 and 1861 were remarkably balanced across all demographics.

The timing of decline is also interesting. Lincoln’s election itself coincided with a sharp decline in prices, indicating clear economic harm to slaveholding interests. But the authors note that several key events on the road to secession – such as the vote in the Georgia legislature in favor of disunion – did little to affect prices. This suggests that secession, per se, did not have particularly good or bad implications for the economic value of slaves on balance.

Prices began declining again after the bombardment of Fort Sumter and the mobilization of federal troops in April 1861, and continued to decline after the Battle of Manassas. Even though the latter was a tactical victory for the Confederacy, the scale of the battle sent a clear signal that Lincoln was abandoning his earlier conciliatory posture.

The authors' conclusion is that the traders transacting in the slave economy during this period felt confident that full-scale warfare would be avoided until a relatively late date, but quickly grew pessimistic after it became clear that Lincoln would not let the southern states off easy. Even once they came to this conclusion, they did not seem to worry that emancipation might be on the horizon, perhaps because Lincoln was careful to disclaim any interest in ending slavery throughout the first months of the war.

With the benefit of hindsight, the bet on secession does not look like a good one – the act of secession created a smaller, more cohesive Union that was more unified against slavery, and which had industrial capacity and manpower that far outstripped the Confederacy's. Still, the historical evidence from slave prices suggests that southern slave owners did not view secession as a particularly high-risk proposition until it became clear that the North was actually willing to go to war.

"Betting on Secession: Quantifying Political Events Surrounding Slavery and the Civil War" appears in the January 2016 issue of the American Economic Review. ♦