Unions provide protections for teachers, but how do they affect students over the long run? 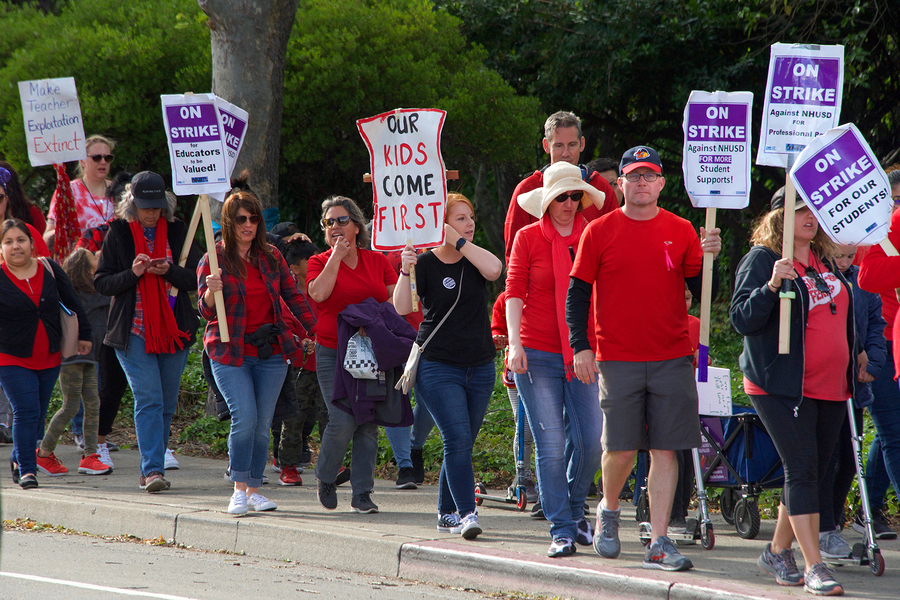 Teachers and students march on the New Haven Schoold District in Union City, California, in May 2019.

A wave of right-to-work legislation in states around the US has made it more difficult for unions to negotiate pay raises and benefits, and a Supreme Court decision last year makes it more difficult to collect dues.

“I expect it to be harder to get the things that we need to do a good job in the classroom and be the teacher that our kids need us to be,” Michigan teacher Sara Sweat Ziegler told Current TV after her state passed anti-union legislation.

Still, it’s difficult to know just how unions influence students in the classroom, especially when it comes to their educational and professional careers over the long run. Educational approaches and student measures vary dramatically across the country, and there’s still a lot we don’t know about how unions interact with districts.

Even though unions are so important to education in this country, we still do not know enough about what they do and how they do it.

In the August issue of the American Economic Journal: Economic Policy, Michael Lovenheim and Alexander Willén provide the first comprehensive analysis of the effects of collective bargaining on student outcomes. They find it actually hurts male students over the long run. Annual earnings and hours worked declined over the course of a decade, especially for African American and Hispanic men. The findings contrast with other research that finds short run benefits to unions, and fills out a more complex picture of how union bargaining power shapes the US educational system.

“Even though unions are so important to education in this country, we still do not know enough about what they do and how they do it,” Lovenheim said in an interview with the AEA.

Lovenheim and Willén collected employment and educational data between 1960 and 1987 to examine how so-called “duty-to-bargain” laws affected students outcomes. These laws, which require districts to negotiate with labor unions in good faith, were adopted by 33 states in the period studied. The authors used the staggered introduction of collective bargaining to measure the impact it had on job prospects and educational attainment.

Collective Bargaining in the US
Each state regulates the rights of employees to unionize and bargain collectively. Some states require it if a majority of teachers vote for union represenation, while others make collective bargaining explicitly illegal. Hover over the map below to explore the range of how states treat the issue differently.
Source: NCTQ (2019)

Taking into account other policies that could have affected the results, the authors found clear evidence that teacher collective bargaining had a negative impact on their employment prospects. Annual earnings declined by $2,134, or 3.93%, from being exposed to a duty-to-bargain law for 10 years of schooling. The effects were especially hard on African American and Hispanic men, whose yearly earnings dropped by 9.43 percent.

Added up over all 33 states that have duty-to-bargain laws, the findings suggest an annual loss of $213.8 billion in labor market earnings. Men also reported feeling less in control of their lives and had lower self-esteem.

The impacts on women were negligible and tougher to pin down. It’s difficult to establish causal effects because of other factors, like more women entering the labor force, that could have thrown off estimates. But the authors say the impact on men is clear.

“The results are very robust,” Lovenheim said. “We were certainly surprised by the magnitude of the effects.”

There are a couple of theories about why collective bargaining hurt these male workers. Having to pay teachers more could have caused budget-conscious districts to invest less money in other educational resources. The job security unions provide might have caused teachers to put forth less effort. Districts might have been more inclined to hire less experienced (and less expensive) educators, or potentially good teachers may eschew the profession altogether.

Still, Lovenheim cautions that this should not necessarily justify eliminating collective bargaining for teachers. Schools in the 1960s, 70s, and 80s were very different from those today.

Nevertheless, the size of the effects should give policymakers and researchers plenty of reason to pay attention.

“It illustrates that the stakes here are very high,” Lovenheim said. “This continues to be an important issue that policymakers and scholars should be focusing more on. There’s a lot of money on the table here, and there are potentially policies we can engage in that would reduce those deleterious effects.”

“The Long-Run Effects of Teacher Collective Bargaining” appears in the August issue of the American Economic Journal: Economic Policy.