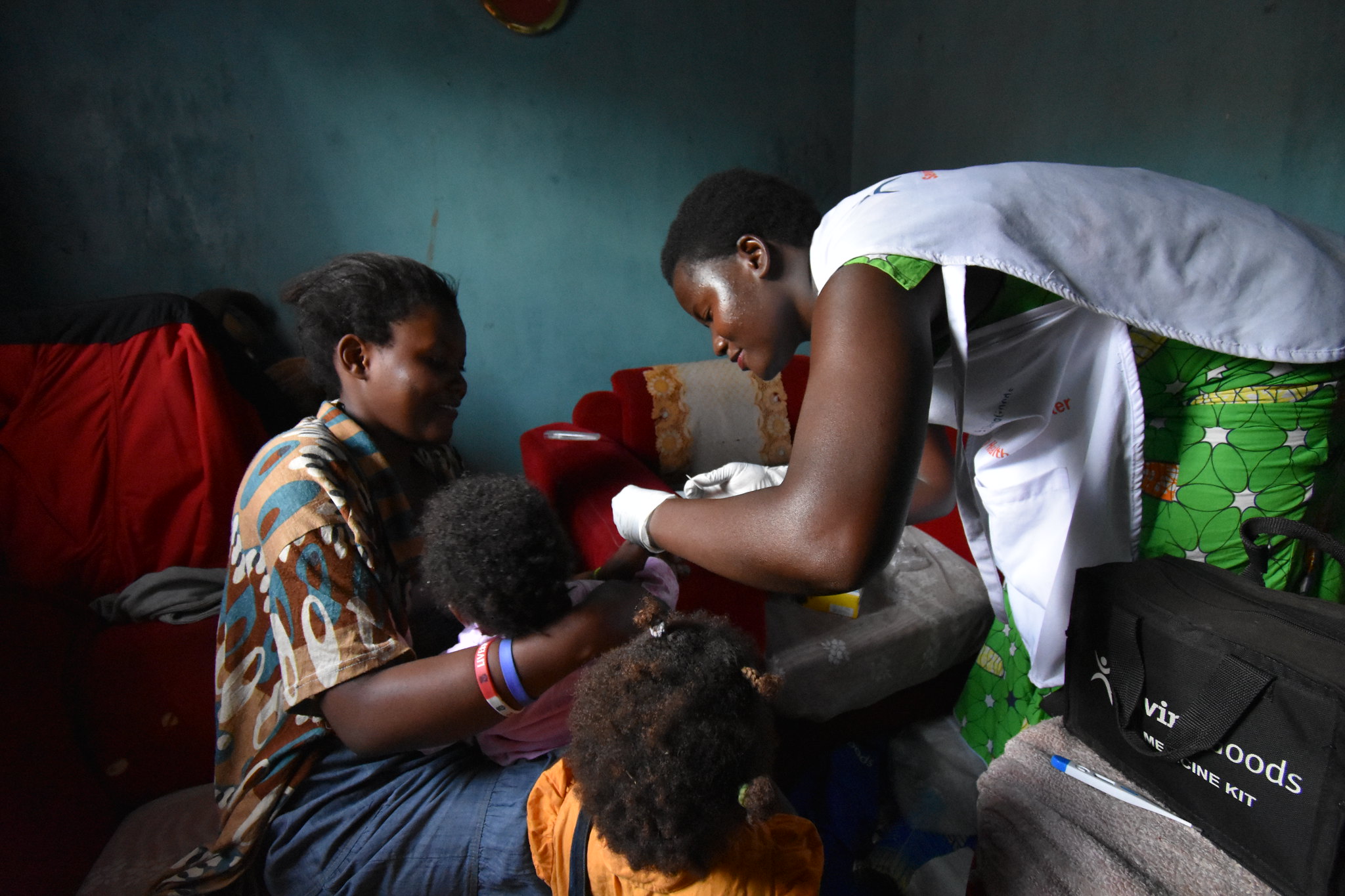 A community health promoter with Living Goods checks on a mother and her child in Uganda in December 2018.

Life has become less precarious for young children in much of the world, with child and infant mortality rates plummeting in recent decades.

Unfortunately, there are still some regions where preventable diseases wreak havoc on kids.

“In sub-Saharan Africa, there are still way too many children under the age of five who die, and it could be prevented with very low-cost interventions,” said Martina Björkman Nyqvist, associate professor at Stockholm School of Economics, in an interview with the AEA. “What can one do to improve the uptake of these services?”

One potential solution may be in a novel program that resembles Avon as much as it does advanced medicine.

In the July issue of the American Economic Journal: Applied Economics, Björkman Nyqvist and co-authors Andrea Guariso, Jakob Svensson, and David Yanagizawa-Drott found profound decreases in infant and child mortality in Ugandan villages where a self-described “audacious project” run by the US-based Living Goods was introduced, in collaboration with BRAC.

In sub-Saharan Africa, there are still way too many children under the age of five who die and it could be prevented with very low-cost interventions. What can one do to improve the uptake of these services?

The researchers found that death rates dropped by 27 percent for kids under five and 33 percent for infants. The results point to a potentially low-cost and sustainable model that would help sub-Saharan African communities better protect their most vulnerable people.

The Living Goods model relies on a network of “community health promoters” to go door-to-door to sell basic health goods, including anti-malaria drugs, soap, insecticide-treated bed nets, clean cook stoves, and fortified foods. The health promoters —  women recruited from within the communities they serve—are not medical professionals. But they are trained to detect danger signs in the home and to diagnose and treat childhood illnesses, referring any severe cases to clinics.

Child Mortality in Africa
Many sub-Saharan countries still experience high rates of infant and child mortality. The map below shows the infant mortality rate for African countries, displayed as the number of deaths per 1,000 live births.
Source: World Bank

A key innovation is that these workers are compensated. Other similar efforts have relied on volunteers to provide household services, but those have struggled to keep workers motivated. Living Goods workers, by contrast, operate as “micro-entrepreneurs.” Similar to the direct sales approach, they purchase their supplies through Living Goods and then keep a portion of the retail markup, giving them an incentive to visit more households and conduct follow ups in order to sell items.

As a business model, direct sales are not without controversy. Companies such as Herbalife and Amway have been accused of operating like pyramid schemes, exploiting their networks of salespeople by charging excessively high wholesale prices instead of relying on revenue from retail sales.

There was no evidence that Living Goods health promoters or patients were being charged excessively high prices, nor that product quality was substandard, Björkman Nyqvist said. On average, community health promoters purchased products at 30 percent below market price, and they sold them to households at an average of 10 percent lower than market, still earning a modest profit. Also, the health promoters did not seem to be pushing only high-margin products.

“We did not find that it’s the case that they are mainly selling what they’re earning most on,” Björkman Nyqvist said.

The program has been rolled out in other countries including Kenya, Zambia, and Myanmar; once the infrastructure is in place, the longer run goal is to pass it off to the respective local governments.

It’s still an open question about whether the program can be effective when scaled up and operated over the long run. Björkman Nyqvist is currently working on an evaluation to answer those questions, but still, these early results are encouraging.

Won't you be my neighbor?