How much of the reaction to Fed policy is based on what officials say versus what they do? 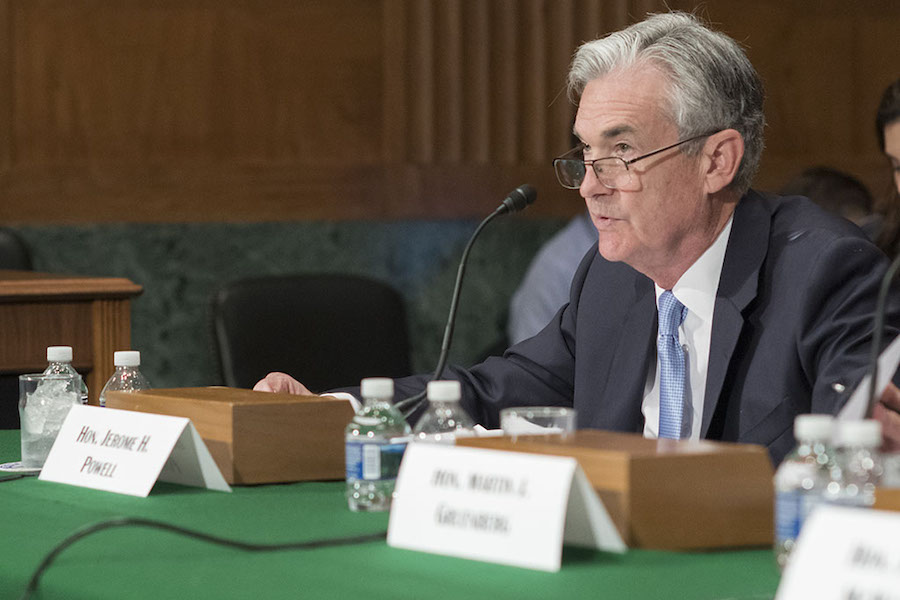 Governor Jerome H. Powell testifies before the Senate Committee on Banking, Housing, and Urban Affairs on the relationship between regulation and economic growth.

The world’s financial system was on the eve of a meltdown, and Federal Reserve officials worried about what to say.

It was August 2007, and it was becoming increasingly clear that years of reckless home lending was about to bring down banks around the globe. Financial conditions were tightening and Fed officials knew it. They considered an interest rate cut before their upcoming September meeting, but wondered how to communicate their outlook on the economy. A wrong word could send markets into chaos.

The Federal Open Market Committee met August 7 and decided to keep the interest rate unchanged, signaling stability. But following a conference call a week later, the committee said the downside risks to growth had “increased appreciably.”

That’s all it took to send stock prices tumbling.

“(W)e were concerned that a surprise cut might lead traders to believe we were even more worried than they had thought,” then-Fed Chair Ben Bernanke wrote in his memoir. “‘Going sooner risks, “What do they know that we don’t,’” Don [Kohn] wrote in an e-mail to Tim [Geithner] and me.”

The moment illustrated a problem that economists have been grappling with as they assess the impact that Fed monetary policy has on the overall economy. Their influence is not just the monetary policy itself and whether to move interest rates up or down. In fact, how they communicate their views on the economy matters too.

This is obviously important for monetary policy makers. However, this is also of broader interest, because it helps us to better understand the functioning of the economy, which can ultimately lead to better economic models and improved decision-making.

A paper in the American Economic Journal: Macroeconomics disentangles monetary policy impacts from the Fed’s public assessment of the economy. Authors Marek Jarocinski and Peter Karadi say ignoring the information component distorts how we measure the effectiveness of monetary policy.

“This is obviously important for monetary policy makers,” Karadi said in an email to the AEA. “However, this is also of broader interest, because it helps us to better understand the functioning of the economy, which can ultimately lead to better economic models and improved decision-making.”

Their findings come at another time of crisis for the global economy, except the threat is biological contagion rather than a collapsing financial system. The Covid-19 pandemic has led to an unprecedented shutdown in the United States and elsewhere. Retail spending plummeted while everyone was quarantined inside their homes, and the Fed pumped trillions of dollars into the economy via rescue loans and bond purchases.

But perhaps just as important as announcing the monetary policy steps being taken is also what the central bank says about the economic outlook, Karadi said.

In their paper, the authors separated the response to monetary policy from the central bank announcements by analyzing the immediate response in interest rates and stock prices.

In theory, easing monetary policy by cutting interest rates would raise stock prices. First, the value of future dividends paid out by that stock increases when it becomes cheaper for companies to borrow money. Second, easier policy would cause economic growth to accelerate in the short term. That’s the point of the easing.

So if interest rates go down and stock prices go up, it’s probably due to the policy easing.

But that doesn’t always happen. Sometimes, interest rates and stock prices move in the same direction. This is often because of something that Fed officials said, rather than what they actually did.

“Our research proves that not just the Fed’s policy decisions, but also its words about the outlook [that] matter,” Karadi said. “And the communication impacts not only financial markets, but has persistent impacts on activity and prices.”

An information disconnect
The scatterplot below shows how investors reacted after individual FOMC announcements from 1990-2016. Dots in quadrants I and IV show times when interest rates and stocks moved as predicted by standard theory (when rates go up, prices go down). Quadrants II and III show counterintuitive movements, when both rates and stock prices moved in the same direction.
Source: author data (2020)

The authors looked at these moments of frantic activity, when something counter-theoretical happened, to separate the impact of monetary policy on the economy from the impact of information. They then measured whether the stock reaction could help forecast what would happen in the larger macroeconomy in the months to come.

They examined asset-price changes—such as interest rates, stock prices, economic activity, and financial indicators—around policy announcements by both the Federal Reserve and the European Central Bank going back several decades to the 1990s. They then measured what happened when there were bursts of market activity within a half-hour following a central bank announcement, a tight 30-minute window when it’s unlikely markets would be responding to anything else besides a Fed action.

They found that the response was very informative about what would happen in the larger economy months later. A rate cut accompanied by a stock price appreciation (the monetary policy effect) led to significant expansion in output and easier financial conditions. In the US, it was associated with a 3 to 6 basis points decline in the three-month fed funds futures (an indication of where the market thinks the daily fed funds rate will be in three months), and a 23 to 52 basis points increase in the S&P 500 index.

Meanwhile, a rate cut accompanied by stock price decrease (which the authors call the “information shock”) led to a deterioration in real activity and financial conditions. It was associated with an up to 5 basis points decrease in the three-month fed funds futures and a 3 to 45 basis points decline in the S&P 500 index in the 30-minute window.

What’s more, the central bank announcement had a more lasting impact on one-year government bond yields, which decreased by about ten basis points and took more than two years to revert back to zero. That was a much bigger impact than the actual monetary policy had, which sent one-year government bond yields down 5 basis points and then ended up taking only a year to settle back to where they were before.

The findings provide a more nuanced and complicated view of how monetary policy shapes the economy. Popular perceptions of stock reactions to Fed actions are that traders are responding to the policy itself. This research demonstrates that it’s not just about an interest rate move. In fact, traders are listening to what Fed officials say as well.

And this is not to suggest that the Fed should just set monetary policy and say nothing further. This would not stop traders from wondering whether officials are too “dovish” or know something bad about the economy that nobody has yet realized, Karadi said. Keeping quiet says something, too.

“I would not jump to the conclusion that the Fed should communicate less,” Karadi said. "The central bank information effect is there whether the Fed says something or not.”

Who pays for a raise in the minimum wage and how does it affect job growth?