Has tribal gaming been a boon for American Indians?

The impact of the 1988 Indian Gaming Regulatory Act 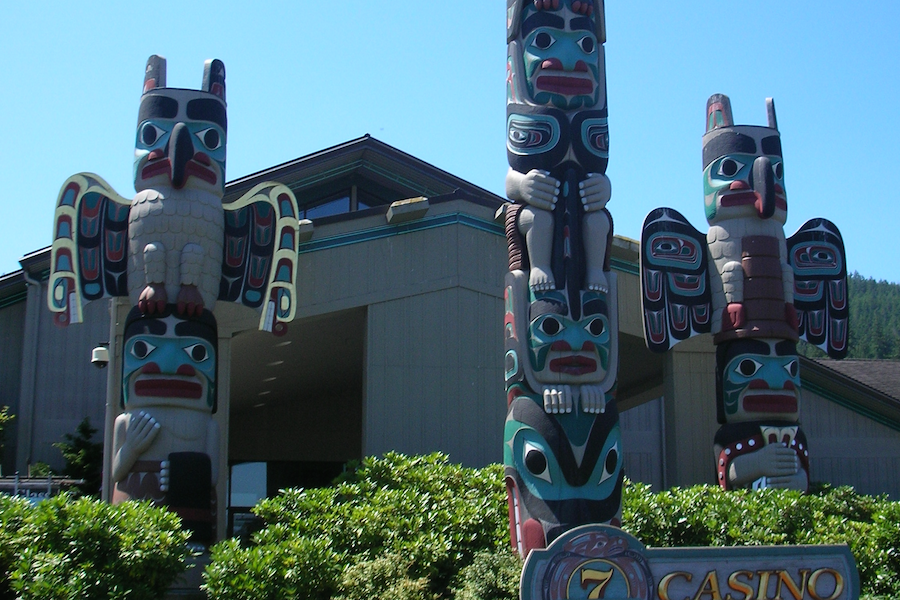 A tribal gaming site in Washington state. There are over 400 Indian gaming establishments operating in the U.S. in 2015, ranging from roadside bingo halls to large resort casinos.

Commercial gambling in the U.S., once almost entirely confined to Las Vegas and Atlantic City, is spreading across an increasingly broad swath of the country. A big part of this story is the rise of tribal government gaming, also known as "Indian gaming," which has grown to become a $28 billion industry in the years since a key 1987 Supreme Court decision cemented the legitimacy of casinos and bingo halls on American Indian reservations.

During that time, Indian gaming has continually attracted controversy, but is also credited with helping many tribes achieve fiscal independence and with reversing the "brain drain" problem afflicting many reservations. An article in the latest issue of the Journal of Economic Perspectives provides an assessment of this history, and its economic impact on the hundreds of thousands of American Indians living on tribal lands in the U.S. today.

In The Indian Gaming Regulatory Act and Its Effects on American Indian Economic Development (PDF), authors Randall Akee, Katherine Spilde, and Jonathan Taylor recount the mostly disappointing history of economic development in Indian Country prior to widespread reassertions of tribal self-governance, such as gaming, and survey the evidence on the impact of Indian gaming on tribal governments and populations.

In the decades before the rise of Indian gaming, tribal governments were often at a loss for investment capital for new commercial ventures on reservation land. External investors were wary about investing in an untested legal environment with unfamiliar (or non-existent) commercial codes and courts. On many reservations, inheritance rules led to heavily subdivided plots of land that made progress difficult for developers looking to build a mall or industrial park.

The most dependable source of capital for such projects was federal grants, but those were subject to political whims and grant-making trends, and were not generally driven by market demand. As a consequence, these investments tended not to make much economic sense or were made at inopportune times and places; many of the resulting buildings remain underutilized and some have been abandoned entirely.

Most Indian gaming happens far from population centers
Indian gaming operations in the U.S., overlayed on a map of population density. Indian gaming is permitted only on tribal trust lands, so the geographic distribution of this industry is skewed by the long history of Indian policy. 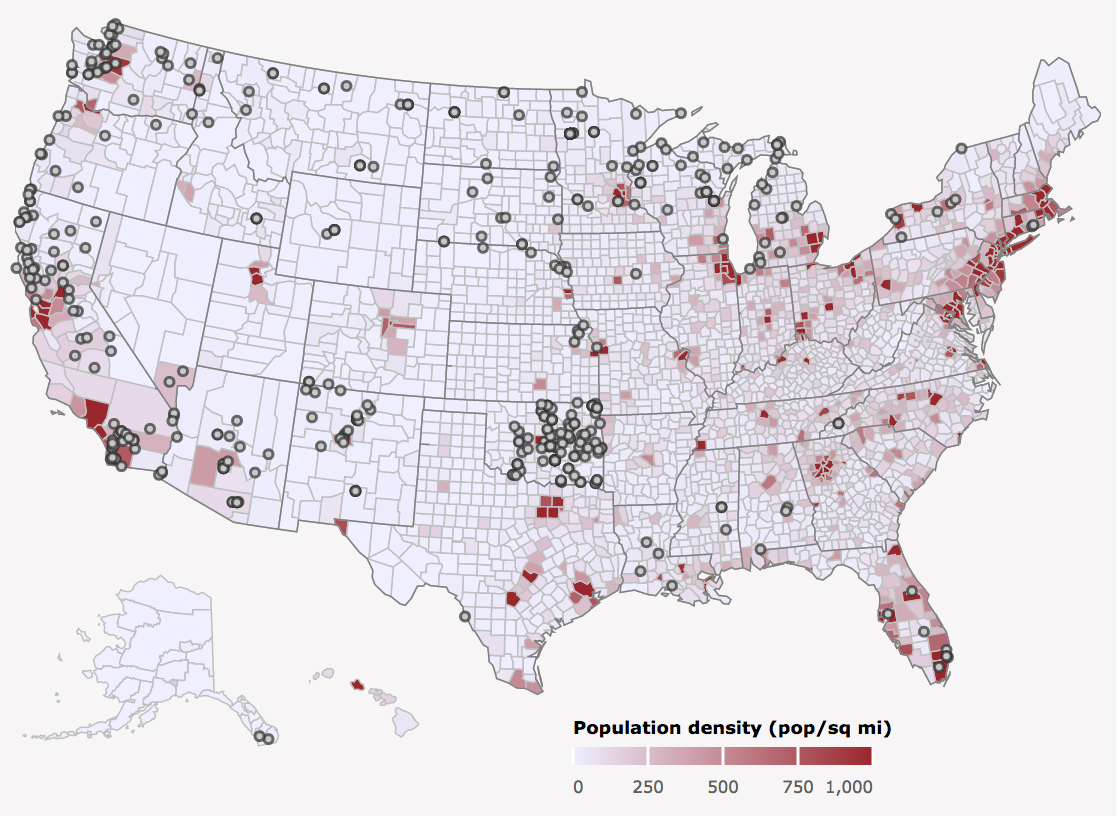 Tribal leaders began turning to gaming in the late 1970s, but state governments often intervened with lawsuits, injunctions, and police raids. These operations were placed on a much firmer legal footing with a 1987 Supreme Court ruling that states could could not ban gambling on tribal lands. Congress responded by passing the Indian Gaming Regulatory Act of 1988, which established a regulatory framework and oversight for these operations that were sprouting up across the country.

The act restricted Indian gaming to reservation or tribal trust lands. Most reservations are in remote areas, owing partially to the sordid history of relations between the various tribes and the U.S. government, so tribes sometimes struggle to find customer demand sufficiently close to their casinos. Tribes can sometimes incorporate new lands in more viable locations, but most attempts to place casinos closer to potential customers have met with resistance.

In one telling example, California voters passed a ballot measure in 2014 that nullified a compact between the state of California and the Northfork Mono Indians. The agreement would have permitted the tribe to build a casino on a site 40 miles from their reservation, closer to population centers and a major state highway. The opposition campaign was backed in part by nearby tribes that would have found themselves in direct competition with the new casino.

Despite these obstacles, over 400 gaming operations have been established as of 2015, and revenues from gaming operations have dramatically increased the resources of many tribal governments. Various tribes have devoted newfound funds to initiatives ranging from college scholarships to drug rehabilitation to foster care services to endangered species management. Some have also reinvested revenues in new Indian-owned commercial ventures that previously lacked start-up capital.

Indian gaming is also associated with markers of rising quality of life on the reservation. Research shows that casino operations are correlated with declines in obesity, smoking, and heavy drinking, and increases in employment. The cash payouts that some tribal governments have disbursed to tribe members have been shown to boost school attendance and degree attainment in the poorest households. Overall, real income per capita for American Indians living on reservations increased nearly 50% in the twenty years from 1990 to 2010, far outpacing growth for Americans generally during this period.

It should be noted that for all the good news coming from Indian Country since the passage of the Indian Gaming Regulatory Act of 1988, the accumulated economic and social deficits on reservations are [still very large]...Given that there is no apparent successor to gaming waiting in the wings for Indian Country, it will remain critical for tribal policymakers to get other aspects of development right.

Of course, gaming operations have also sparked controversy on many reservations, often stemming from disagreements about how to share revenues or control of the gaming facilities themselves (in one case, an armed standoff between rival factions forced the closing of a casino in California). The authors also highlight the tendency of some tribes to expel some members; because many smaller tribes distribute a portion of gaming revenues equally to all enrollees, some factions have incentive to cull membership rolls and increase payouts for the remaining members.

The authors end on a note of caution. Even with recent gains, incomes for most American Indians living on tribal lands still lag far behind national averages, and as others have pointed out, native populations still suffer from widespread social ills, including shockingly high rates of sexual violence, poor access to health care facilities and jobs, and inadequate law enforcement. Gaming helped jumpstart economic development in Indian Country, but tribal governments still need to diversify their economies and defend tribal budgets. Hopefully the new tribal institutions and administrative expertise that have grown up around the Indian gaming economy will help achieve these goals. ♦

"The Indian Gaming Regulatory Act and Its Effects on American Indian Economic Development" appears in the Summer 2015 issue of the Journal of Economic Perspectives.