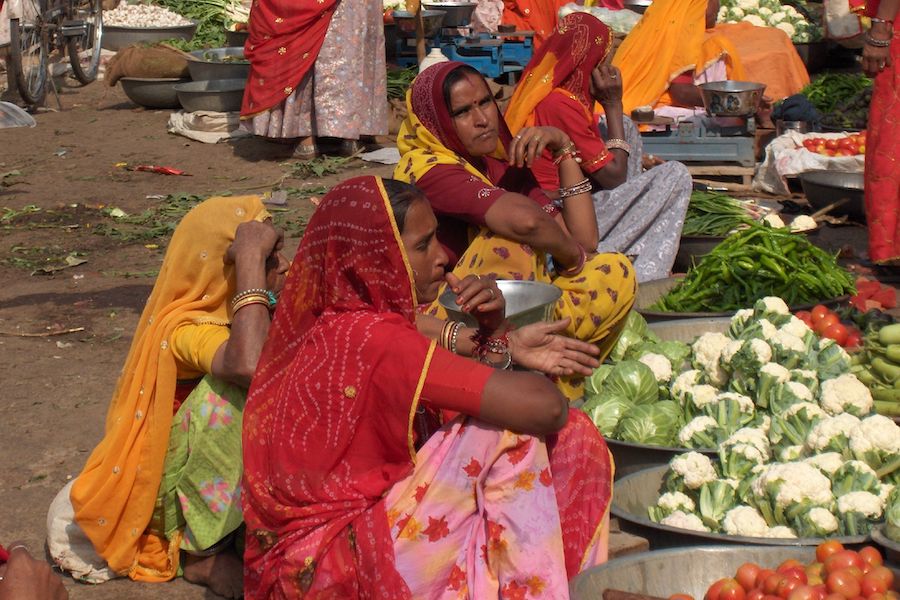 Female vendors sit on the ground at a fruit and vegetable market in Rajasthan, India, in November 2006.

Economic development programs that provide capital to small businesses want to make sure they’re getting the most bang for their buck. However, they might also have other social objectives, like increasing the number of female entrepreneurs.

And though many target women as clients, past studies have shown that providing capital to female entrepreneurs doesn’t result in them growing their businesses. This has led to some suggestions that men in developing countries are a better bet for programs that want high returns.

A paper in the September issue of The American Economic Review: Insights offers a more nuanced explanation for what underlies this apparent entrepreneurship gender gap by looking at household composition.

The paper shows that in dual-entrepreneur households, where both a husband and wife have their own separate businesses, many women invest the money into their husband’s more profitable enterprise rather than their own. So, the woman’s business doesn’t benefit from an influx of capital into the household. But when female entrepreneurs have the only business in the home, their returns on that capital are comparable to men.

If you give the money to the woman, that money often ends up being in her husband’s business.

The findings have implications for how lenders design their microfinance programs and may force them to consider larger questions around their goals for economic development and promoting equality, said co-author Natalia Rigol.

“It matters who you target the money to,” Rigol said in an interview with the AEA. “If you give the money to the woman, that money often ends up being in her husband’s business.”

The paper builds on an  American Economic Review article that Rigol and co-authors Rohini Pande, Erica Field, and John Papp published in 2013, which examined small business lending to poor entrepreneurs in India.

That AER paper wasn’t focused on gender differences. Still, the authors noticed a curious departure from previous studies: household-level returns for female business owners in their paper were high.

Why did Indian women in their study appear to have more success?

It’s not that the prior research was wrong, but perhaps there was a nuance in how the returns to capital were being measured that was being missed.

Rigol, Pande, Field, and Arielle Bernhardt re-examined the 2013 data along with two other studies from Sri Lanka, and Ghana to compare how enterprise-level returns to capital differed from those at the household-level. They also asked if female-owned businesses performed differently when they were the sole breadwinner in their household versus when they shared a home with another entrepreneur.

Looking only at the individual businesses, the researchers came to the same conclusions as earlier studies: on average, cash and loans had little impact on boosting women’s businesses while they had a sizable impact on men’s profits. However, when looking at households, a capital infusion resulted in both men and women making high-return investments.

When women were the sole business owner in the home, then the financing went to boosting their returns. But when she had a husband who ran a business, her cash grant went into making his project more profitable. In other words, to the extent that a gender gap exists, it is largely being driven by women giving money to their partners.

“There are a host of reasons, but I would boil them down to two,” Rigol said. “The first is that the husband’s business is more productive. . . . The second one is there is a bargaining power problem.”

Female Enterprise Profits
The profitability of women's enterprises in India and Ghana depended a lot on whether they shared a household with someone else who owned a business. When they were the sole entrepreneur, women had much higher returns on cash grants given to them. The amounts below have been converted into US dollars
Source: Table 3 from Bernhardt, et al

The first explanation is a classical one—it’s just more efficient to put money into the business with the highest returns. The other one speaks to larger social dynamics. Maybe the wife runs a really productive business, but if the husband has more power in the relationship, he might take the money for himself anyway.

It’s difficult to say which explanation is more likely, Rigol said. She suspects that both are at play.

The findings hold implications for economic development programs that aim to help grow microenterprises in developing regions, and it raises larger questions about the objectives of microfinance in poor countries, Rigol said.

These lenders must consider whether their goal is simply to grow entrepreneurship in developing economies, or whether their priority is to help disenfranchised women.

If their goal is to do both, then they have to pay attention to power dynamics within households. Women may need to be supported in multiple ways – they need the funds and they also need access to profitable entrepreneurship opportunities on the same terms that men have. In households where men start with the power, programs that hope to empower women will need to go beyond just cash transfers to equalize access to economic opportunity within the household.

“A funding organization just needs to understand what it’s objective is and to be able to measure whether it’s meeting its objective,” she said.

“Household Matters: Revisiting the Returns to Capital among Female Microentrepreneurs” appears in the September issue of The American Economic Review: Insights.

Erin McGuire on how crowdfunding can open doors for female entrepreneurs