Better intercity transportation spurred the decline of sole proprietorships in American cities at the turn of the 20th century. 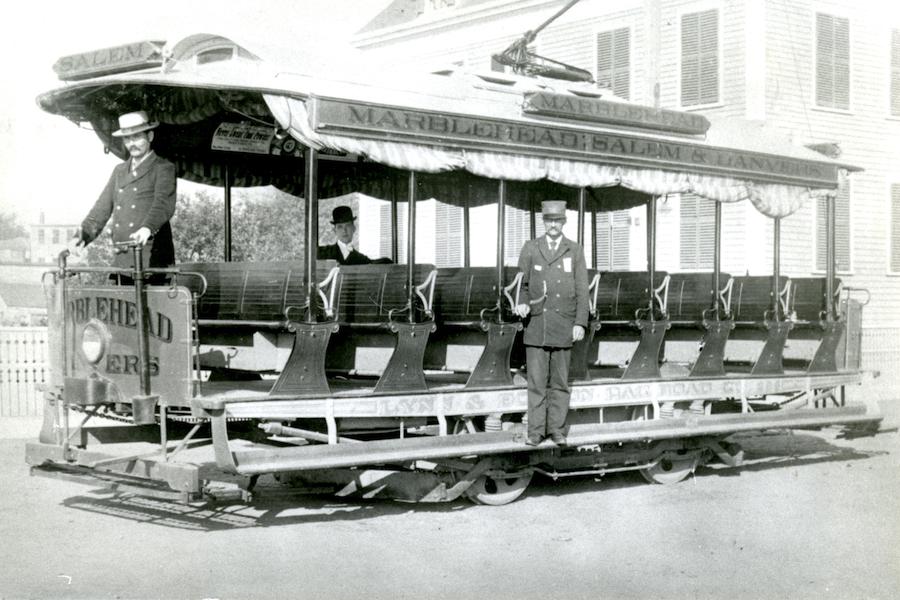 A streetcar on the Marblehead, Salem, and Danvers line of the Lynn and Boston Street Railway, circa the 1890s.

“Mom-and-pop” stores used to dominate the American economy. In the first few decades of the country's history, nearly all enterprises were small, family-run operations. Now, only about 10 percent of workers are employed at businesses with fewer than ten employees.

In a paper in the American Economic Journal: Applied Economics, author Wei You looked back at technological advancements in 19th century Boston to get a better understanding of the decline of small establishments in the United States. He found that upgrades to the city’s transportation infrastructure played a key role in enabling the size of retailers to grow.

The findings show how transportation shapes the business landscape and may offer clues as to why small businesses are still so prevalent in developing countries today.

While completing his Ph.D. in the United States, You was struck by the distances he had to travel to go shopping.

“I grew up in China, and in the cities I lived in there, most grocery stores are within walking distance,” You told the AEA in an interview. “Just by living in two different countries, I noticed that the spatial spread of stores and their sizes can be very different, so I started asking myself why there is such a difference.”

Policies such as taxes or subsidies may not significantly change the firm-size distribution because there are some very fundamental technology constraints that determine it. That distribution is highly stable.

Initially, American businesses weren’t so large and spread out. Despite substantial population and economic growth, the nature of firms remained relatively unchanged between 1790 and 1840. Instead of growing in size, the total number of businesses increased to meet the nation’s swelling demand over the period.

That pattern started to change during the Industrial Revolution. New transportation technologies enabled much larger volumes of people and goods to move across the country at lower cost.

While previous researchers have noted this development, You’s work goes beyond anecdotes and correlations by looking more narrowly at intercity travel within Boston between 1880 and 1905.

Like in other major US cities before the 1880s, the people of Boston got to and from their local stores primarily by walking or riding on horse-drawn streetcar systems. But from 1889 to 1896, Boston rapidly upgraded to an entirely electric system. In that short period, the best means of transportation in the city nearly doubled in speed and tripled in capacity.

You used this rapid electrification to identify the impact of lower transportation costs on the share of sole proprietorships in the city. Specifically, he compared neighborhood stores near electrified streetcar routes to those that remained in horse-drawn transportation areas slightly farther away from routes, before and after the upgrades.

He found that among grocery stores—which accounted for over half of establishments in 1885—the share of sole proprietorships near commuter rails declined sharply compared to those farther away.

Areas more closely connected to downtown Boston also saw larger drops in small food establishments. This difference was especially pronounced between Charlestown, which was connected to central Boston directly by bridges at the time, and East Boston, which was not directly connected to the city center until the opening of a tunnel in 1904.

Charlestown vs East Boston
The chart below shows the share of sole proprietorships in total food establishments between 1880 and 1905 by distance to the nearest streetcar route. The dashed vertical lines indicate the period of rapid electrification of Boston's streetcar system. Charlestown (left panel) was well connected to downtown, but East Boston (right panel) was isolated from the central business district at that time, which inhibited the impact of electrification on mom-and-pop stores in the neighborhood. 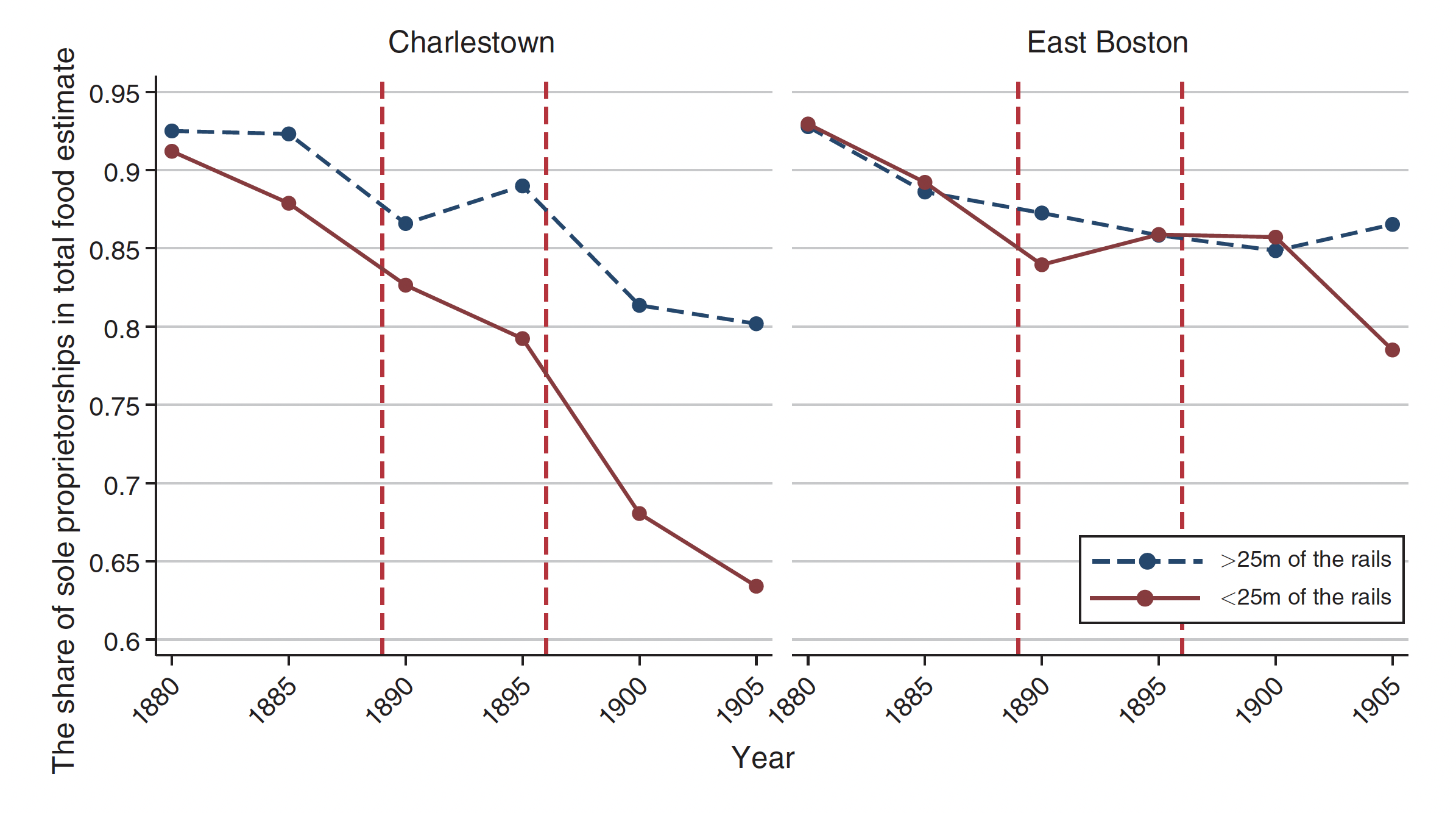 Overall, the number of larger food establishments near rails grew by over 100 percent, while the number of smaller food retailers decreased by more than 5 percent.

The results indicate that shoppers were quick to take advantage of the electric streetcars for their grocery shopping. And in response to a larger pool of customers, grocers next to streetcar routes increased in size, either by growing themselves or by being pushed out by larger entrants. In contrast, food establishments not connected to the new transportation system, such as those in the suburbs, remained small and continued to serve their local neighborhoods.

But, nonfood establishments were not affected in the same way.

One explanation for the difference is the higher frequency of grocery shopping at the time. Without refrigerators, families had to buy food daily, often from different stores, and the items were usually difficult to carry. These factors likely increased the sensitivity of consumers to travelling for food purchases. In fact, You found that grocery stores that relied on the sale of frequently purchased, perishable food items—such as milk and produce—suffered more than others.

In all likelihood, according to You, even these large changes to transportation weren't big enough to affect small businesses that relied on less frequent shopping.

While Boston’s experience illustrates the effect of transportation on sole proprietorships, it offers another lesson for developing countries trying to promote the creation of larger, more efficient companies.

“Policies such as taxes or subsidies may not significantly change the firm-size distribution because there are some very fundamental technology constraints that determine it,” You said. “That distribution is highly stable.”

“The Economics of Speed: The Electrification of the Streetcar System and the Decline of Mom-and-Pop Stores in Boston, 1885–1905” appears in the October 2021 issue of the American Economic Journal: Applied Economics.

How did infrastructure accelerate economic growth in the UK?

Going from gasoline to electric