How did infrastructure accelerate economic growth in the UK? 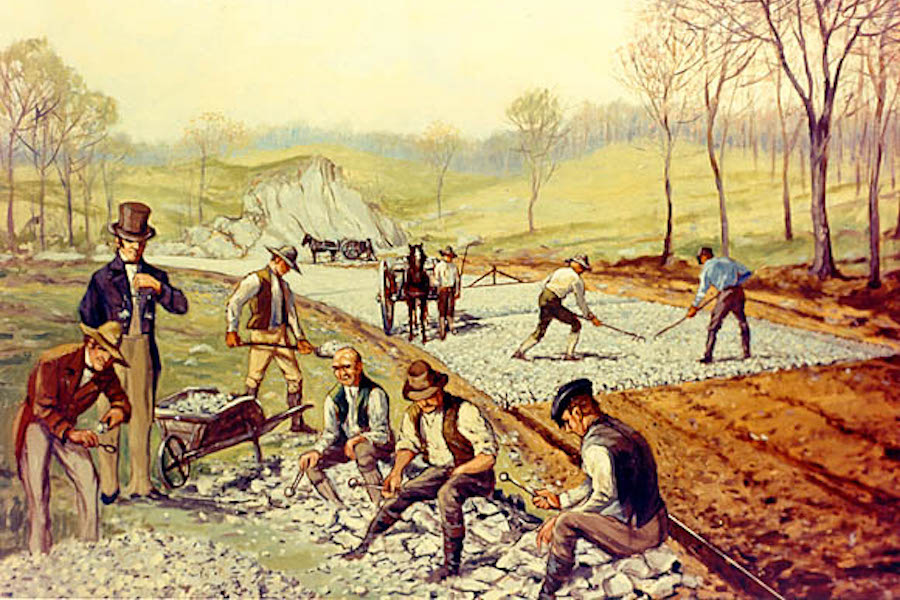 Men work on a macadamized road in Maryland, 1823.

Economists and historians have identified dozens of factors that laid the groundwork for the Industrial Revolution. They’ve pointed to everything from the development of finance to the growth of cities to cultural changes as reasons for the staggering economic growth the world has seen since it first took off in Britain three centuries ago.

But the literal groundwork—the physical infrastructure—of the Industrial Revolution is just as vital to understanding when and where it started, according to a paper in the American Economic Journal: Macroeconomics.

Author Alex Trew modeled the impact that better roads, canals, and railways had on the geography and makeup of the economy of England and Wales from 1710 to 1881. He found that Northern England’s more local approach to infrastructure building accelerated its economic boom.

A firm grasp of the interplay between development and transportation could give policymakers a more nuanced understanding of what drives growth and the potential tradeoffs.

Scholars of the Industrial Revolution have often emphasized the movement of people and resources from farms to factories. But England’s industrial hotspots—such as Birmingham and Manchester—already had a significant amount of manufacturing by 1800, when the economy really started growing.

“A lot of labor was already in industry even in the early 18th century. . . . The timing would be off by a hundred years or more,” Trew told the AEA in an interview.

What was changing rapidly around the time of takeoff, however, was transportation. From 1700 to 1865, the cost to ship one ton of goods one mile fell by 95 percent.

Takeoff and transportation
The chart below shows per capita growth rates and sectoral employment levels in England and Wales. The primary sector is mostly agriculture but also includes forestry, fisheries, and mining; the secondary sector is made up of  manufacturing and construction; the tertiary sector is largely transportation and communication industries, plus sellers and dealers. 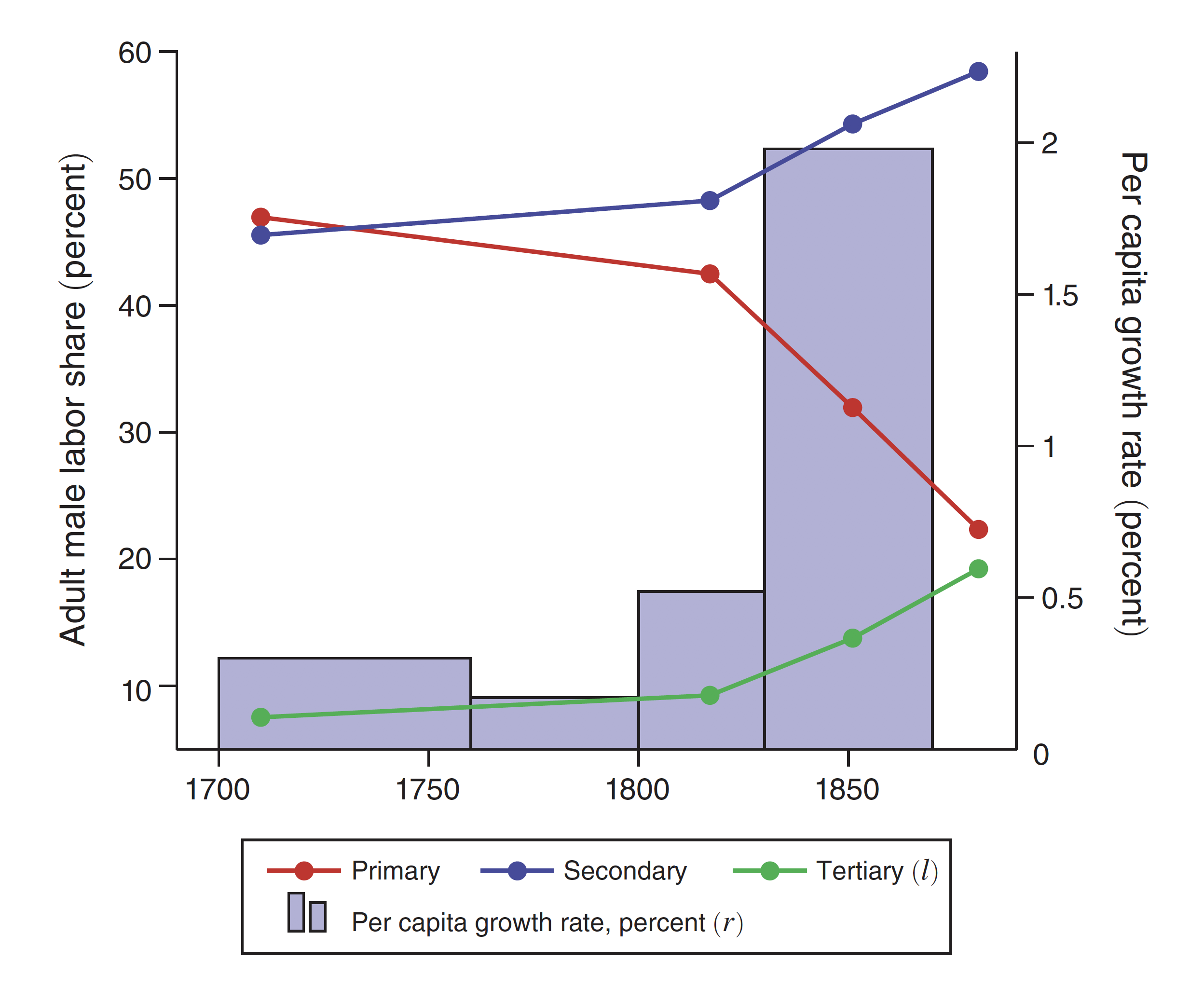 Throughout the 1700s, roads were handed over to private turnpike trusts, which made improvements through new techniques. The canal mania led to the construction of thousands of miles of canals from the 1770s to 1810s. And the railway mania took hold shortly after that, providing a whole new network of routes.

Unlike today, these projects were financed by local businessmen and farmers, usually by selling stock, and not the central government or the new financial centers of London. Thus, infrastructure development was concentrated within smaller regions. This turned out to be critical to the North’s early growth spurt.

Like previous research, Trew found that by itself more infrastructure led to lower transportation costs. But when spread evenly across the country, this counterintuitively delayed the Industrial Revolution by a couple decades in his model.

This is because inexpensive shipping lowers the density and size of businesses, encouraging them to remain small and dispersed. As a result, they tend not to reach an economy of scale that’s big enough to make breakthrough innovations that require large, up-front investments.

I do wonder whether or not publicly organized infrastructure is missing something that England gained with its ability to just put down a railway line or a canal in the places that could pay for it.

Trew added to this picture by highlighting the importance of labor movement in and out of the transportation sector. When canals are deepened and widened, they are faster and can support larger shipments. And, in turn, the transportation sector needs fewer workers to ship the same amount of goods. This frees up workers for the manufacturing sector and drives more growth.

The balance between these two forces and the concentration of infrastructure that supports the most productive manufacturers, among other factors, contributed to the timing and location of the Industrial Revolution.

Trew’s work suggests that central governments can accelerate growth by funding infrastructure projects, but they need to be sensitive to the local economic conditions. Geographically ambitious plans may backfire.

“I do wonder whether or not publicly organized infrastructure is missing something that England gained with its ability to just put down a railway line or a canal in the places that could pay for it,” Trew said.

“Endogenous Infrastructure Development and Spatial Takeoff in the First Industrial Revolution” appears in the April issue of the American Economic Journal: Macroeconomics.

How much does government support for manufacturers help workers?