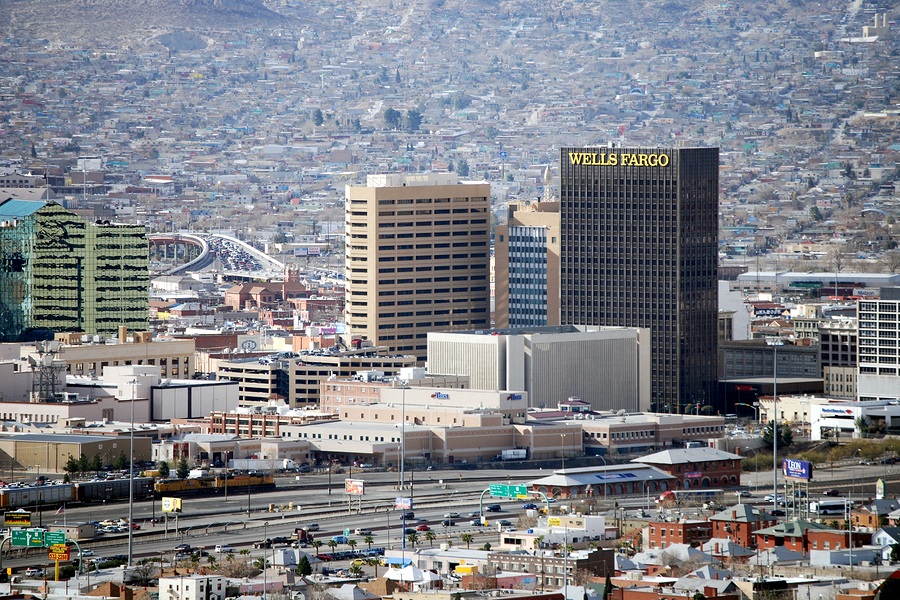 Downtown El Paso, Texas, with a view of Ciudad Juárez, Mexico in the background, pictured in 2008. Cities in northern Mexico with easy access to the American market have become centers of the maquiladora economy.

Free trade agreements have had a rough time of it this campaign season – the 1994 NAFTA deal has become a punching bag on the campaign trail and support for the Trans-Pacific Partnership (TPP) free trade pact is eroding as even ardent pro-trade Republicans are distancing themselves from the prospective deal.

This comes as a recent survey showed a large segment of the electoral is souring on free trade deals, perhaps thanks to the perception that America’s trading partners are getting too good a deal at the expense of American workers. At the same time, a debate is raging about whether Mexico and other industrializing countries benefit from free trade agreements as much as American politicians say they are.

As more and more middle-income countries are turning to exporting as a strategy for growth, there are increasing questions about the downsides of depending too much on richer trading partners to drive growth. A new study appearing in this month’s issue of the American Economic Review investigates whether export manufacturing in Mexico helped or hindered efforts to get more students through high school.

In Endogenous Skill Acquisition and Export Manufacturing in Mexico (PDF), author David Atkin assembles a detailed dataset using education data from the Mexican Census and employment records dating back to the 1980s from the Mexican Social Security Institute, which manages health care and pensions for Mexico’s workers. The dataset allows him to track arrivals of new jobs across each of Mexico’s 2,443 municipios (roughly equivalent to counties in the U.S.).

The data tell a story of rapid transformation in Mexico’s economy after 1986, when the country took steps to liberalize trade and joined GATT, precursor to the World Trade Organization. The export manufacturing sector had added almost 2 million new jobs by 2000. And 65% of all net new manufacturing jobs were concentrated in 10 export-intensive industries including apparel, footwear, electronic machinery, and scientific equipment.

The passage of the North American Free Trade Act (NAFTA) in 1994 only served to accelerate these changes and make Mexico an even more attractive place for export manufacturing. Maquiladoras flourished in cities across northern Mexico and some American manufacturers moved operations south across the border to take advantage of lower wages.

At the same time that Mexico’s economy was opening to international trade, educational attainment and literacy rates were trending upwards. According to Atkin, this reflects a common strategy in rapidly industrializing countries – export-led growth in the short term combined with investments in education for growth in the long term. 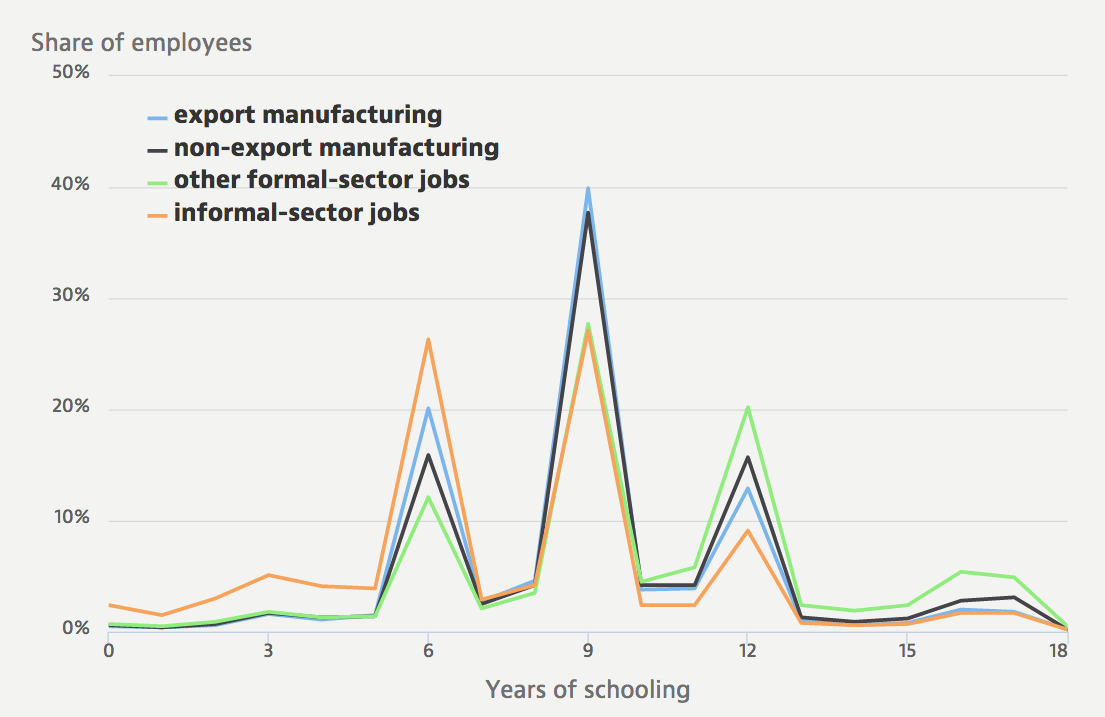 But as new factories began popping up in cities and towns across Mexico, looking to fill hundreds of thousands of new high-paying jobs that mostly didn’t require high school degrees, these strategies came into conflict.

Atkin highlights the stark tradeoff young Mexican students faced when new jobs came to town: on the one hand, jobs with high wages that require more skills or a high school diploma can be a powerful inducement to stay in school and ensure a better future. But lower-skilled jobs that a ninth grader could fill mean a higher opportunity cost: each year spent progressing through high school means lost wages that could supplement family income or help get out of debt.

Before a new factory opens its doors, that opportunity cost is pretty low for most students with a ninth-grade education – the best jobs available might be low-paying or require a high school degree, so staying in school makes sense. Once a new maquiladora sets up shop and offers jobs that people with a ninth- or even sixth-grade education can fill, dropping out becomes much more tempting.

Atkin uses the Social Security Institute data to track the arrival of new export manufacturing jobs in each municipio across Mexico each year from 1986 to 2000. He focuses on major expansions or contractions that result in an increase or decrease of at least 50 jobs, as these major changes are less likely to be related to local labor market conditions and more likely to result from changing demand for exports to the United States.

New job opportunities are likely to be most impactful for the cohort that is aged 16 when the jobs arrive – this is the minimum age for formal employment in a factory and the typical age for students completing ninth grade, the last year of compulsory schooling in Mexico. Even though compulsory schooling laws are not strictly enforced, the data bear this out: 16 is the most common age to leave school in Mexico.

Atkin argues that this means 16-year-olds are most sensitive to the arrival of new jobs: younger students can’t legally take the new factory jobs, while most older youths have either already entered the workforce or are trying to finish high school. Atkin looks at the 2000 Census data to see how the educational attainment of cohorts who turned 16 changed when major hiring sprees occurred in their municipios, as compared to slightly older and younger kids in the same areas.

Atkin finds that the opportunity cost seems to be dominating the desire to stay in school for Mexican teens: the rate of drop-out after grade 9 was elevated for cohorts that saw an influx of export manufacturing jobs during the year they turned 16, relative to slightly younger and older youth. The data on ultimate educational attainment recorded in the 2000 census indicate that, for every 25 new export manufacturing jobs in a local area, one student dropped out after grade nine rather than completing high school.

The 2000 data also indicated that these cohorts that were exposed to new job openings at age 16 were earning slightly less money on average than comparable peers who hadn’t been exposed. This means there isn’t any evidence that the on-the-job training they may have received was more valuable than additional years of school.

Many developing countries, including Mexico, have prioritized raising the education level of the workforce at the same time as pursuing an export-oriented industrialization strategy. Given the trade-off between these goals in the Mexican context, it is vital for policymakers designing industry- or location-specific policies to know which types of new manufacturing opportunities pull students out of school and in what context.

He also finds that dropout rates by gender responded in predictable ways when certain industries arrived in town. Male-dominated manufacturing industries like metal manufacturing and petroleum refining exerted proportionately greater pull on male students, while industries with a more balanced workforce like electronic manufacturing and apparel seemed to pull boys and girls out of school at more equal rates.

Of course, students who dropped out to go work in factories might well have benefited from the appearance of new jobs in their municipios, even if it meant they likely didn’t finish their high school educations. Nothing in the data indicates that they are necessarily worse off, and the extra income they earned might have been hugely beneficial depending on their family circumstances at the time.

Then again, the stunting effect of new export manufacturing jobs leaves Mexico with a slightly less educated populace and might ultimately be slowing down the transition to a more advanced, diversified economy. Atkin notes that policymakers will need to be mindful of the inherent conflict between a shift toward export manufacturing and a push for a more skilled workforce.

“Endogenous Skill Acquisition and Export Manufacturing in Mexico” appears in the August 2016 issue of the American Economic Review.