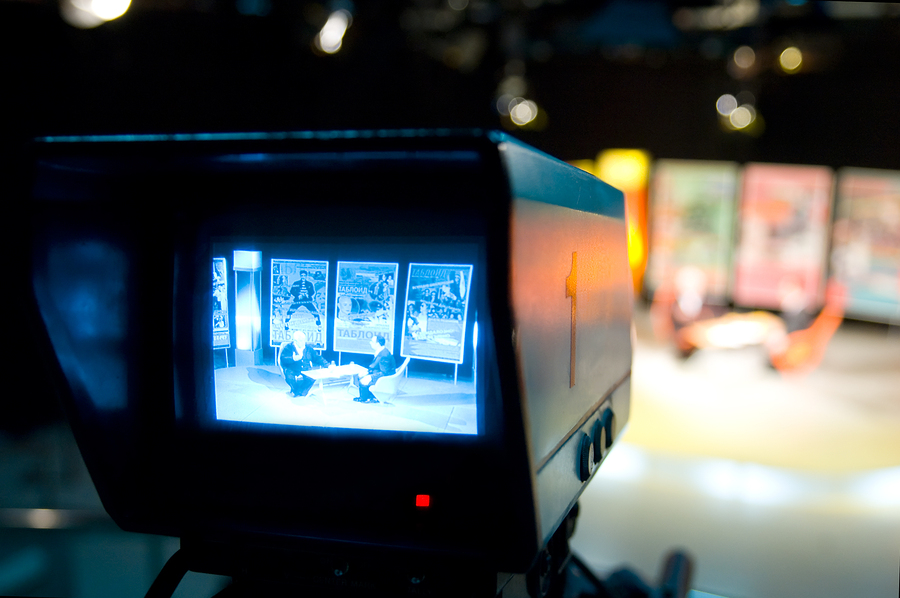 Silvio Berlusconi owned a controlling stake in Mediaset, a media company with several broadcast TV channels in Italy, while he served as Prime Minister. Mediaset TV ad rates were consistently higher during his terms in office.

Most research on the role of money in politics has focused on direct contributions to politicians to finance their electoral campaigns. But politicians with substantial business holdings have an additional conflict of interest – they have incentive to steer public policy in a way that is favorable to their companies or helps their clients. Meanwhile, firms looking to curry favor can send their business to a politician’s company, hoping they will be remembered when it comes time to make a tough legislative decision.

Do firms actually steer business toward politicians in this way and can their behavior give some clue about how much they expect to get in return? An article appearing in this month's issue of the American Economic Journal: Applied Economics studies the case of a prominent politically-connected businessman: Silvio Berlusconi, who founded the Mediaset media company and continued to control it while serving as Prime Minister of Italy in the 1990s and 2000s.

In Market-Based Lobbying: Evidence from Advertising Spending in Italy (PDF), authorsStefano DellaVigna, Ruben Durante, Brian Knight, and Eliana La Ferrara use advertising data from Italy available in the the Nielsen AdEx database, to track the behavior of firms buying ad time on Mediaset TV channels as Berlusconi entered and exited office. The authors hypothesize that certain companies will be more eager to advertise on Mediaset channels when Berlusconi is in power. Berlusconi's coalition came to power on three separate occasions during the study window, so the researchers have a good opportunity to statistically discern any differential behavior by advertisers during that span.

The authors develop a simple model of the Italian TV advertising market. In Italy, firms that want to advertise on television have two basic choices: they can choose to advertise on channels owned by Mediaset or channels run by the Italian public broadcasting agency, RAI. There are two types of firms: regulated firms, who stand to gain or lose relative to their competitors based on a particular government action, and unregulated firms which have less stake in specific public policy changes.

In the model, the regulated firms (but not the unregulated ones) have a newfound reason to advertise with Mediaset when Berlusconi becomes prime minister. The company will respond to the surge of interest by raising prices, which will deter the unregulated firms which have no particular interest in advertising on Berlusconi’s channels. The model makes two main predictions: advertising prices on Mediaset will rise when Berlusconi is in power (or expected to soon come to power), and the mix of advertisers on Mediaset channels will shift toward regulated firms during those periods.

Did this actually happen during Berlusconi’s three stints as Prime Minister of Italy in the 1990s and 2000s? To answer this question, the authors must first decide which industries qualify as "heavily regulated." The authors rely on a survey of Italian economists who were asked to rate various industries on a scale of 1 to 10 based on how much the firms in that industry can benefit from government policies like regulations and subsidies. The authors average the survey responses to assign a "regulation score" to each of the 22 different industries in the Nielsen advertising data.

Who buys ad time on Mediaset channels?
Share of Italian television advertising budgets spent with Mediaset, by industry type. Firms in heavily regulated industries disproportionately shifted advertising to Mediaset channels during periods when its founder and part owner, Silvio Berlusconi, was serving as the Prime Minister of Italy. 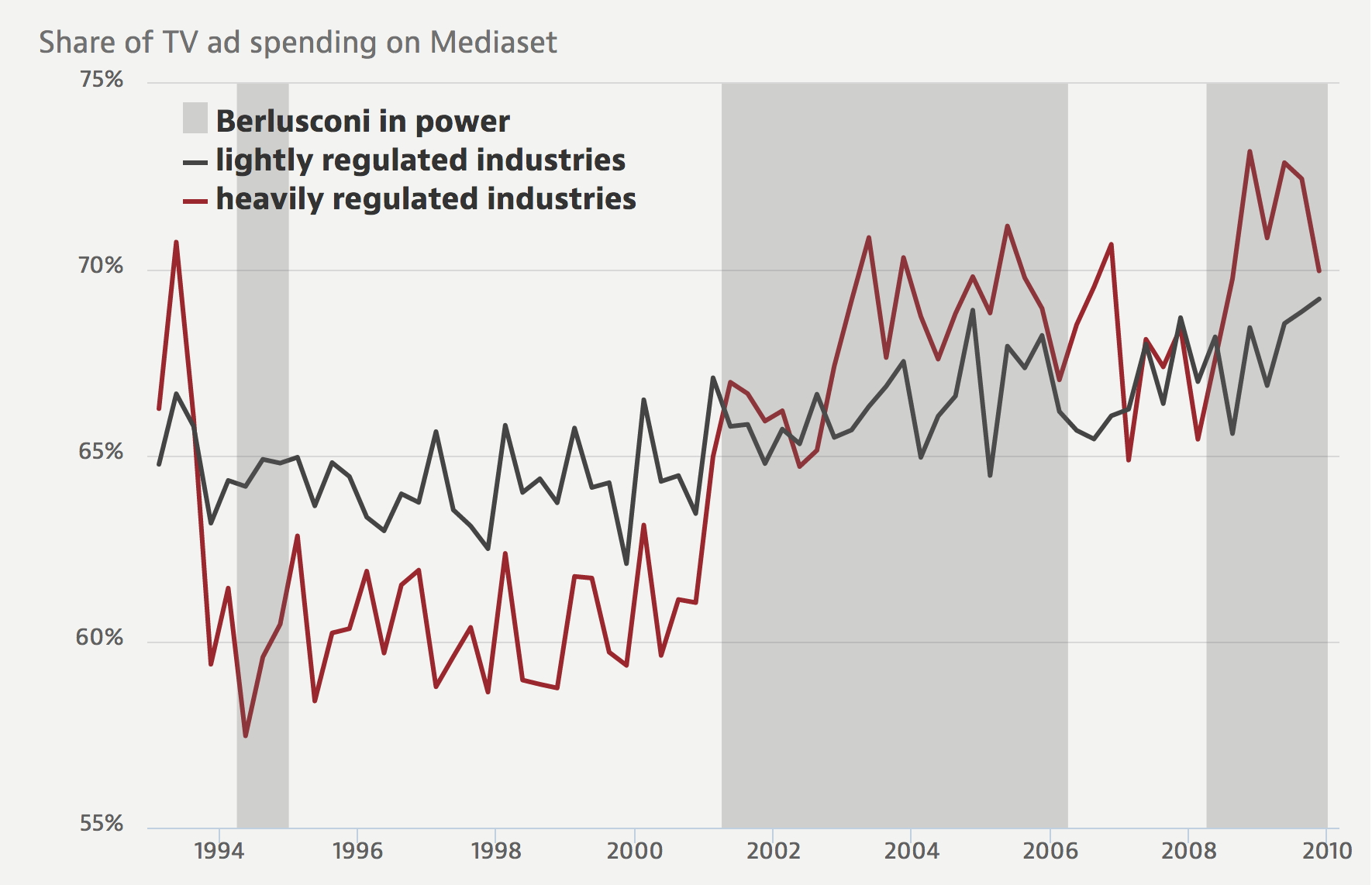 The industries with the highest regulation scores include telecommunications, pharmaceuticals, and manufacturing. These industries are sensitive to government action because even a minor regulatory ruling could abruptly sink their fortunes while elevating their competitors, so they might reasonably be expected to care more about getting on an influential politician’s good side.

By contrast, lightly-regulated industries like apparel, drinking/alcohol, and foodstuffs do not tend to have a huge stake in everyday public policy decisions. These industries may be broadly affected by food safety laws or trade policy, but the government has less scope for elevating one company’s fortunes over another.

The figure above shows the share of overall TV ad spending that was spent with Mediaset by firms in different kinds of industries. Heavily-regulated firms (red line) tended to tilt their advertising budgets more toward Mediaset during Berlusconi's time in office, especially his third term as prime minister beginning in 2008.

This shift to Mediaset came despite the fact that the price for a second of ad time on Mediaset relative to the public channels was about €15 higher on average when Berlusconi was in power. It could be that prices rose because Mediaset became a more attractive place to advertise in general during Berlusconi's time in office. However, further research shows that audience size and demographic composition on Mediaset channels was not significantly different when Berlusconi is in or out of power.

This suggests that the price increase is attributable not to a better advertising opportunity but to greater demand for ad time on Mediaset channels when Berlusconi is Prime Minister. According to the authors' model, the size of the price increase is quite meaningful because it can tell us how much the regulated firms value the opportunity to show their support for the politician through increased business.

If Mediaset is able to raise its prices considerably when Berlusconi takes office, and firms are still eager to buy air time despite no significant changes in the audience, that implies that ad buyers anticipate major political benefits from giving Mediaset their business.

In this case, the authors calculate that Mediaset's advertising partners cumulatively paid about €1.9 billion extra over the course of Berlusconi's three terms for the privilege of advertising on the network. According to the logic of the authors' model, this is a measure of the amount of political benefit that firms are expecting to receive from this indirect lobbying.

[T]he literature on campaign contributions typically has a hard time pinning down a value of the benefits to the firms contributing. The large magnitudes implied in the above calculations stress the potential for large policy distortions.

The authors' entire analysis is based on ad expenditure data from Nielsen – they have no direct evidence of any particular decision being unduly influenced by Mediaset's advertising partners. However, the fact that the price of ad time rose significantly during Berlusconi’s tenure, and the fact that regulated firms stepped up and purchased more expensive ads, suggests that these firms were at least partly interested in gaining influence with the prime minister.

A democratically-elected head of state controlling a major commercial enterprise may be unusual, but the case of Berlusconi is hardly unique. The authors highlight several cases of politician-tycoons in other young democracies ranging from Argentina to Thailand.

The potential for indirect lobbying of politician-run firms is something that hasn't received as much attention from political scientists studying the role of money in politics in the U.S. context, but the large estimates of political benefits calculated in this paper certainly invite more scrutiny of these arrangements. The authors close with a call for more investigation of indirect lobbying and a broader conversation about conflict-of-interest laws. ♦

"Market-Based Lobbying: Evidence from Advertising Spending in Italy" appears in the January 2016 issue of the American Economic Journal: Applied Economics.